The Last One to Hear

A friend of mine who travels frequently usually checks in with me upon her return. It's more than saying "Hi," asking how I am and what I'm doing. She wants to know if anyone's died, or if some other misfortune has befallen anyone in our small community.

It happened to her once--that awful embarrassment when she inquired after someone, only to learn that person had died while she was traveling. It's happened to me, too.

Sometimes I think I'm the last one hear about anything. My seclusion is not total. I get out two or three times a week to go to the post office, drop off the trash at the solid waste transfer site, which is our version of trash service), or run errands in Seward or Anchorage. But most of the time (when I'm not traveling), I can go days without seeing or talking with anyone.

That's why I can empathize with this young bald eagle. I can tell it's young because it's head is a mixture of brown and white feathers, and it's tail is still white. 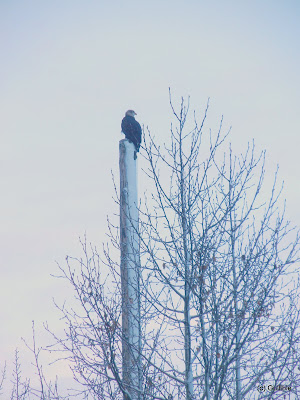 Every time I head south towards Moose Pass, I see this eagle sitting atop a power pole.

The pole is located very close to where the solid waste transfer site used to be. Right in the middle of town, adjacent to the only road that runs through it, the transfer site was always an horrific mess. The roll-on dumpsters couldn't be closed without preventing most of us from tossing our trash into the huge steel containers.

So, the doors remained open--open to the magpies, ravens, and eagles that dumpster-dove and scattered trash all over the property. They wouldn't leave the wrappings of food in the container, but haul them out onto the ground. Then the wind blew them back and forth, and Moose Pass started getting a reputation as "that place with the messy dumpsters."

Last winter, though, a new transfer site opened six miles south. It's fenced to keep out the bears. The containers are modified to keep both bears and birds out. 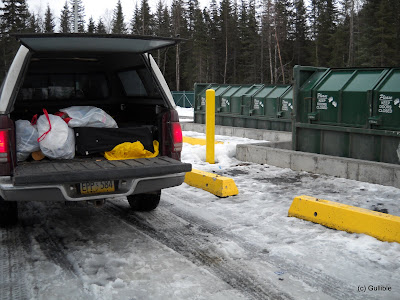 It's a wonderful site. Nice and clean, with the containers set below the drive-on ramp. Makes it easy to dispose of trash. I, in particular, appreciate not having to lift a sack of household garbage over my head to get it in the dumpster. 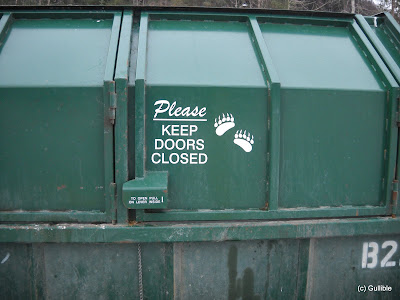 The doors swing open easily, and are kept closed to keep out the critters.

But apparently the eagle hasn't heard. Not that he'd find lunch at the new site anyway, because the dumpster doors are kept closed. 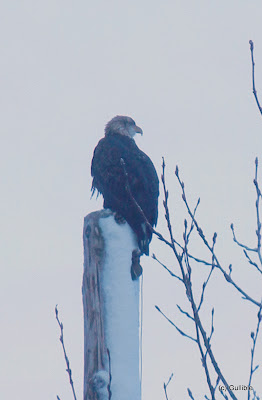 The last one to know.

I think we're kindred spirits.
Posted by Gullible at 6:16 PM