Friday morning, April 1, San Francisco
I had several friends and relatives I wanted to call when I reached my motel room in San Francisco, but thought I’d wait until evening when they were most likely to be home.
I had slept some on the eleven hour Lufthansa flight from Frankfurt, Germany, on a route that took us over the British Isles, Iceland, Greenland, Canada’s Hudson Bay, Ontario, and across the US from Minnesota to California, but I was still tired.   I’d already gone through the Daylight Saving Time nonsense a week before I left on this trip, and then had to go through it again when Europe switched also.  Factor that into the half-day I lost going over and regained coming back, and you arrive at discombobulation.
I needed a nap.
So, I decided to take that nap at 2 p.m.  I woke up at midnight.  No calling friends and relatives at this hour or I would no longer have friends and the relatives would disown me.  I went back to sleep for a couple hours.


At 7:33 a.m., I decided to wait in the lobby for the 8:03 airport shuttle.  I could call them from there.  I wheeled my bags up the walk.
The shuttle was parked in front already.  A few minutes later, I was dropped off at the airport.  I strolled right up to the counter and checked the suitcase with all the heavy stuff.  The baggage fee has gone up five dollars to $20, but it’s worth it to not have to lift that book-laden bag into the overhead storage bin.
Only five people were ahead of me in security and I zipped right through.  I’ve learned to wear slip on shoes.  I mention that because a number of people still haven’t figured this out. 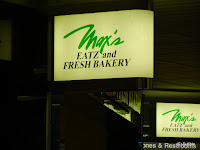 Along the concourse where Alaska Air and Southwest cuddle up to their respective cattle chutes, there’s a bistro called Max’s “Eatz and Fresh Bakery.”  I love it!  Best airport food ever.  It serves various made to order sandwiches that are enormous, much more than I could eat. 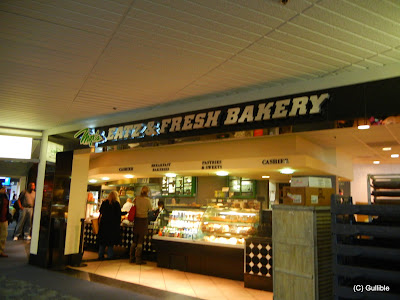 When I first discovered this gem—I think it was last fall on my way home from China—my pastrami sandwich was huge and juicy and aromatic enough to make everybody on the plane hate me with envy had I chosen to eat it there.  The wrapped remains in my purple shoulder bag wafted tantalizing scents in my vicinity for hours.
At this hour, Max’s was serving breakfast, so I don’t have any pictures of the hams, and corned beefs and so on.  There was the usual long line.  I paused at Max’s long enough to take photos.  My tummy was still full of waffle and orange juice. 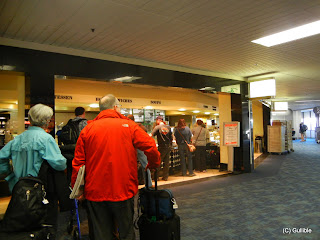 A teen-aged girl sitting next to me is eating an omelet, luscious home-fried potatoes, and toast.  An elderly woman just asked her if that was a McDonald’s breakfast.  As if!
The lady who asked about McDonald’s has returned with a cup of something hot and the immediately identifiable black and white checked bag from Max’s.  I see scrambled eggs in Styrofoam.
If you’re thinking I’m turning this blog into a food critique, it’s probably because my culinary waddle through Germany and Austria is much on my mind…. as well as on my tummy and hips.
I am in dire need of Nutrisystem, Weight Watchers, and Jenny what’s her name all together.  Along with a Boeing 747 load of self-control.
Posted by Gullible at 11:24 AM