I was looking through the newspaper the other day and saw another one of those lists that rate the various states according to how much federal funding flows their way in relation to how much tax money flows the other way.  It always makes Alaska look like it's a money-grubbing greedy pig, taking far more than it pays back.

What those lists never tell you is that almost seventy per cent of Alaska is federally owned and controlled.  The exact number I found in a bit of online research is 69.1 %.  Federally owned.

Within the boundaries of Alaska are the two largest National Forests in the union, the Tongass and the Chugach.  The Chugach is where I live.  It's literally right out my back door.

The largest National Park in the U.S., the Wrangell-St. Elias, is located in Alaska.  It has nine of the sixteen highest mountain peaks in the U.S.  It's also as large as nine states.

The highest peak in North America is Denali, located in Denali National Park, also in Alaska.  The park is as large as Massachusetts.


I'm probably missing some more things, like wild rivers and so on, but you get the idea.  More than two-thirds of Alaska is federally owned and controlled.

If you're wondering what all these statistics have to do with laying  in a firewood supply, it's this:  These logs came from the Chugach National Forest.  That's right.  They came from federally owned land.

See the black spots on the spruce trunk above?  Those are beetle holes, bored by a nasty little quarter-inch long critter called  (what else) the spruce bark beetle.

There's been a plague of them here on the Kenai Peninsula working their winged way north towards Anchorage for three or four decades.  The beetle bores a hole through the bark and lays eggs.  The resulting larvae burrows around the phloem layer between the bark and wood, eventually girdling the tree and killing it.


These particular logs came from the Hope area, about forty miles from here.  The Forest Service held timber sales there to get rid of the beetle-killed trees.  Their removal also is to clean the forest of fuel in case of wildfires.

The wood is good for lumber for several years and excellent for firewood as most of it is "standing dead."  In other words, the tree is still standing after it dies and dries in that position, rather than rotting on wet ground.


I bought this load of firewood logs from the loggers who have a saw mill nearby.  With the firewood I already have in my wood shed, and the six cords or so I'll cut from this pile, I should have enough wood to last four to six years, depending on whether or not I stay home to burn it in the winters.

Am I worried about this infested wood carrying beetles that will attack the spruce on my property?  Nope.  This wood has been dead several years and the bark is flaking off, which means there is little chance of a beetle/larvae surviving in it.

So, the next time you see one of those charts showing how much money each state gets from the federal coffers, remember that 70 per cent of Alaska is federally owned.  Those lists never tell you if all the money went to the state government itself, or also to the federal agencies that manage federal lands.

Here's a site that has a jaw-dropping map in blue and red showing what percent of each state's land is owned by the feds:

http://bigthink.com/ideas/21343
Anyway, I'll leave you with this.  I took it a couple evenings ago from my loft window. 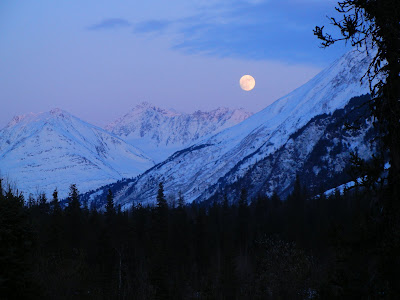