Therefore, what little was accomplished resulted from bribery.

Yesterday I straightened up the wood shed so I could start moving all this new wood into it.  I had to move around some wood that was already in there.  Not much, but a bit.  Then I unloaded the wood  that had been stacked on my vacant lot, and which I'd moved over on a trailer earlier in the week.

I got a late start yesterday, so I quit early to make up for it.  If that went by you too fast, it was supposed to be a joke.

Today was no joke.  Today was all about bribery.  I had to bribe myself to keep going.  I went to the first pile of newly-split wood and loaded the cart.

After ten or twelve cartloads, I wanted to quit.  My hands ached.  I didn't want to be out there.  I wanted to be inside reading a trashy novel.  Or something.  Anything other than using my hands, outside on a chilly, windy day. 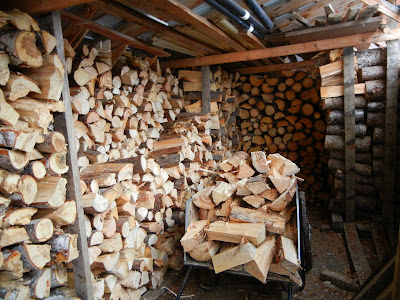 I persevered.  Finish filling this side and you can go home and have a nice cup of cocoa chai, I promised myself.  I finished it, and went inside as promised.

A half hour later, I was out there again.  It was even windier. 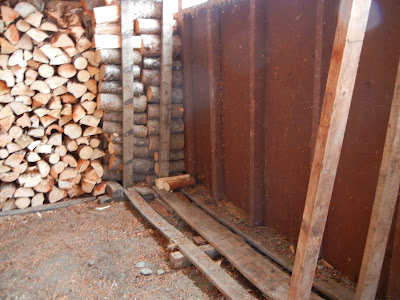 I started filling the other side of this bay.  My hands ached.  I wanted to quit.  I wasn't at all unhappy when the rain started.  Only, some of this rain was mighty opaque and didn't fall straight down.  There was substance to this rain. 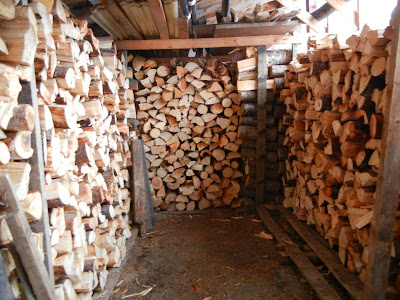 I finished one row on the other side.  There's a reason I stack the wood like this.  It has to do with not exerting too much pressure on the sides of this three-sided woodshed.  I built this thing thirty years ago when my husband was out of town on a construction job, and I didn't tell him until he got home.
Not only did we have a new woodshed, but it was filled with fifteen cords of split firewood.  It measures ten feet wide by forty feet long.   I worked late into the nights on this project.  My hands would "go to sleep" on me at night, keeping me awake.  I think it was from muscles swelling.  Towards the end, I had to use both hands to swing a hammer.
That, I'm afraid, goes beyond determination.  I felt traces of it today, out there working when I didn't want to be out there working.  I wanted to be inside drinking cocoa chai.
By the time I finished putting away the wood in the front pile, which was slightly more than two cords, the rain was more earnest.  I picked stuff up, put things away, and covered the last big pile of split wood with a blue tarp.   That procedure would have made a good routine for Charlie Chaplin.  Did I mention the wind was really blowing?
For those of you who know better than to get involved with nonsense like this, a cord of wood measures four feet wide, four feet high, and eight feet long.  Double that mass.  That's how much wood I moved today.
Then I went home and had another cup of cocoa chai.
Posted by Gullible at 11:33 PM