Saturday and the Ensuing Sabbatical from the Computer

I haven't been on the computer much lately for a couple reasons.  One reason is depicted in the photo below: 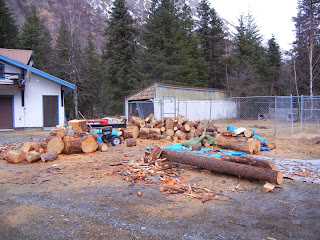 Mother Nature was watering my lawns and everything else in this vicinity Saturday morning so I decided to go to Anchorage.  My puny little list of errands compiled over the last few weeks increased exponentially Friday night when I took time out from the woodpile and cleaned my two vehicles and the garage.  My cell phone had been missing for more than week by that time, and I was on a hunt, hoping to say, "Dr. Motorola Livingstone, I presume?"

I removed all the tools and trash from the pickup, all the stuff that had accumulated during the great woodlot project.  I vacuumed each vehicle, searching under and around the seats.  Nothing that could be called a cell phone appeared.

Then, because I needed to take my two chain saws to the dealer in Anchorage, I took them apart and cleaned them with gasoline, removing all the oily sawdust.  I didn't dare show up with them in their previous state.  The counter guy would have thrown me out the door, chainsaws and all.

That led to cleaning up most of the mess I'd tracked into the garage during this project.  Still no cell phone.

With Saturday morning rain guaranteeing I'd not be working on the wood pile, I loaded up the saws and dull chains and my incredibly long list of errands, and headed out the driveway towards Anchorage, a hundred miles away.

The seagulls have claimed the southern end of Potter Marsh as their nesting grounds, and everywhere across the water and islands, pairs of gulls were perched. 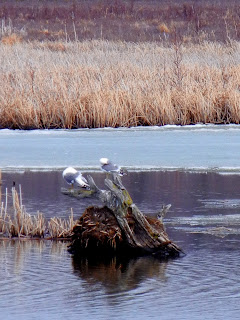 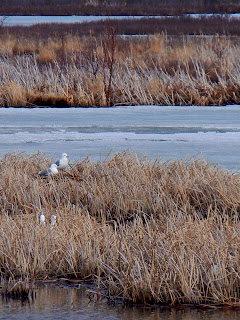 The first store I went to, the Stihl chainsaw dealer, was still on winter hours and closed Saturdays.  Bummer.  It got worse from there.  The second store, my stopgap for a Stihl dealer, also was closed.

The hardware store where I hoped I could buy a new sharp chain didn't carry chains that fit Stihl saws.  They also had stopped carrying the blue insulsated cotton work gloves that I dearly love.  Triple bummer. 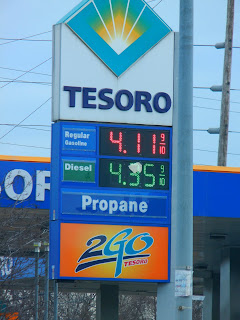 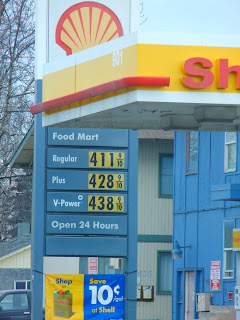 The parking lot at Costco looked like pre-Christmas.  I parked in the north Forty and hitchhiked to the store.  (A wee exaggeration.)  Remarkably, when I arrived at the checkout aisles, I walked right up and put my items on the conveyor belt.  Sweet.  Something had gone right for the first time that day.

After I loaded my purchases in the van, I remembered what I wanted from Costco in the first place, so I went back inside.  I wasn't so lucky this time, and had a long line ahead of me. 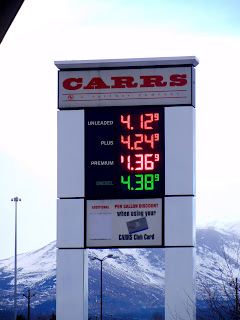 By this time it was nearing 5 p.m., too late to call Patti and catch the 4:10 showing of Water for Elephants, even if I'd had a cell phone, which I didn't.  And I haven't noticed a pay phone in Anchorage for years.

WalMart didn't have the vacuum cleaner bags I needed.  By this time, I was completely frustrated.  I gassed up the van and headed down the highway towards home, stopping to take these photos of wind surfers taking advantage of tide changes and wind. 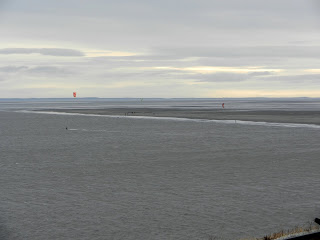 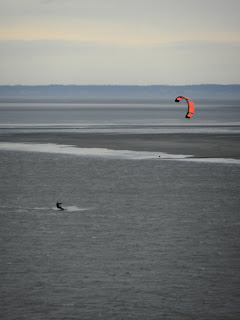 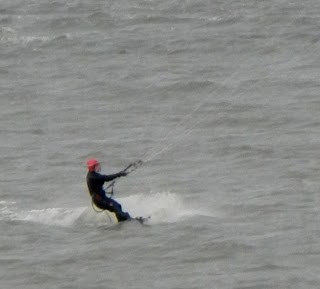 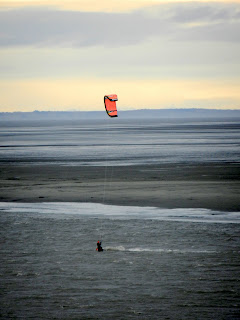 All right, I've made it through this post.  The other reason I haven't been around here lately is something resembling carpal tunnel syndrome in my right wrist.  Said wrist is overworked, the muscles enlarged.  When I try to type, the hand goes all "pins and needles-y."  My diagnosis, based on multiple experiences with the same malady.

With my adventure in the woodpile nearing an end, I can say this with some authority:  I most likely would not be able to accomplish that project a year from now.  Also, this problem, though it will go away sometime in the near future, will severely limit my ability to clean up litter from the sides of the highway.  Squeezing the grip on the grab stick will aggravate the wrist.

I might have to go back to bending over and picking stuff up by hand, though that won't rest the wrist much.  Right or left handed, the wrist will have to work either by picking litter or holding the bag.  Rats.  It's the perfect time of year to do it--most of the snow gone and no green foliage hiding beer cans and candy wrappers.

Maybe I should just go on a cruise for a while...
Posted by Gullible at 2:30 PM