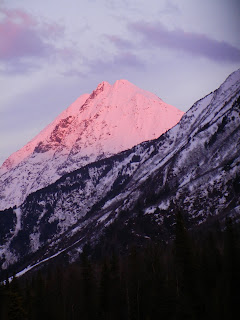 Ten in the evening.  Alpenglow from the setting sun is kissing the mountain peaks goodnight.

My body wants to be in bed; my mind says otherwise.

The two are at odds with each other these days, with the mind biting off large chunks of chores and the body protesting vehemently.  It's spring and most of the snow and ice is gone.  That means one thing around here:  Litter picking season is in full swing.

With the last of the firewood stacked in the woodshed, I've begun picking up litter along the highway, totally ignoring all the chores I should be doing at home.  There's only one place I want to be and that's out walking the ditches, filling yellow bags with beer bottles, diapers, and fast food wrappers.

It's become an obsession.  Each spring when I begin, I fear this might be the last season I can do this.   Last year it was my shoulder;  this year it's the ankle I injured in Mexico a couple years ago.  A couple days ago I didn't think I was going to make it back to my truck, the ankle hurt so much.  As I was limping along the last hundred yards to the truck (picking up litter, of course), it dawned on me how I could placate the sniveling, whining, complainiing ankle--turn around and walk the other way!  DUH!

It was that simple.  I hurt the ankle by hyper-extending it inward.  When I walk the ditches facing traffic, that's the way the ankle bends along the sloped shoulders of the highway.  If I walk with traffic (not quite as safe), the ankle bends outward, which is okay.  Mostly.

I'm now working twelve miles from home, but there's a mile and three-quarter gap distance that I haven't yet cleaned.  I have to bite off those chucks in little bites because I get so discouraged.  A couple years ago six miles of highway was re-done and upgraded, but after it was paved, the contractor put down glue-on lane striping.

When the snow plows come through in the winter, pieces of that striping are scraped up, littering the sides of the road.  No matter how much litter I pick up, the shoulders still look a mess.  I get what I can, but that lane striping is like cigarette butts, which I also don't pick up because the human life span is far too short.


When I finally dragged myself back to the truck this evening, the bag count reached 103 bags.  Some explanations are required.  Not all the bags are full.  I carry them until the shoulder says, "That's it.  I'm not playing anymore."  So, I tie off the bag and leave it on the side of the road.

Sometimes I leave a partially filled bag if there's something large, like a tire, that won't fit in the bag.  Or, if I've finished with a section and the bag isn't full, I'll leave it rather than take it home.  Most of the time, though, either the shoulder or the hand complains about the weight of the bag.

I'm going to bed.  I'll let you enjoy the photos of some things I've found so far: 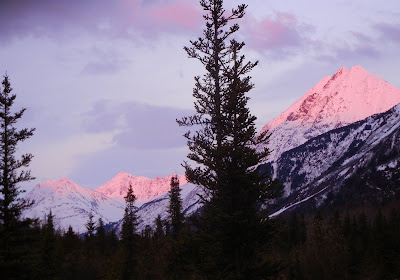