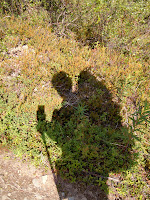 I paused for a long time at this bridge, lost in memories from April of 1973.  A group of us who worked in Girdwood were doing a ski/dog team journey on this trail.
The previous day had been rough.  Spring was early this April, and the snow was rotten.  When my dogs finally reached Juneau Lake, they sank into the snow with each step.  So did I.  I soon realized my boots were hitting water, probably overflow or meltwater on top of the ice.
The next morning, though, the snow had solidified in the chilly night air and the dogs flew up the lake to this bridge, where we once again paused to wait for the skiers to catch up.
It was a different bridge then, of course, with high side rails, and was still covered with snow.  The snow had melted along the edges, leaving a two foot high berm down the center of the bridge, one not wide enough for my sled.  I would have to place the sled carefully to straddle the berm.
My lead dog would have none of it.  Again and again I had to drag her back to the bridge.  She kept breaking away and insisting on running straight up the valley.  I knew where the trail was.  We had to cross the bridge to get to it, regardless of the faint snowmachine tracks going the way my lead dog wanted to go.
I finally had my way.
Later on in the trip I would learn that my lead dog Kole was right.  Had we followed her up the valley, we all would have had a better trip.
Kathy, a skier, would not have broken her big toe on the ups and downs of the summer route.  Paul may not have aggravated a heart condition.  The whole trip would have been easier and faster if I’d listened to a smart lead dog.  But no, I knew where the trail was.  The summer trail, but not the winter trail.
As the dogs ran across that narrow berm, the sled leaned to the right and my arm hit the high rail.  My down parka snagged on a small sliver.  The dogs kept going, pulling through the resistance.   I kept trying to shake loose of the sliver.
I felt it touch my skin and scrape along my forearm.  By the time that splinter broke loose, it was more than a foot long and over an inch thick at the broken end.  I shuddered at the thought of the injury it could have done had it stuck into my arm.  Major damage.  Instead, I had only a long angry scratch from wrist to elbow.
I finished with the reveries and crossed the bridge, another tent camping site, and wandered up the trail.  I was back in thick forest.  On and on and on, singing “Hickory, dickory, dock.”  I met no one else on the trail. 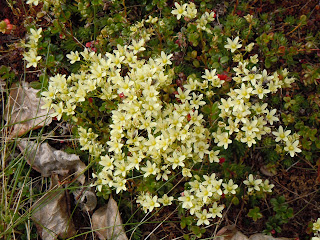 After a long time, the vegetation changed again as the trail crossed the flank of a mountain.  Lots of rock and moss and lichen appeared, and I knew I was getting close to the trail’s intersection with Swan Lake trail, and my camping place for the night.
Then, there it was:  Swan Lake straight ahead, my trail a 90 degree turn.  Camping within a quarter mile.  I was looking forward to this.
I walked on, searching for the post that marked a tent site and bear box.  There should have been two of them in this area.
All of a sudden I was in the switchbacks.  This can’t be, I thought.  Where are the tent sites?  They wouldn’t put them in the switchbacks, would they?  Away from a water source?
Now I was confused and really tired.  Did I overlook the posts?  Were they covered with vegetation and hidden?  Maybe they were on the side trail to Swan Lake.  But, if that was so, why not mark them as Swan Lake trail .03 and .06, instead of 12.3 and 12.6 on the Resurrection Trail?  Wherever they were, I couldn't find them.

Now what was I going to do?  This was messing up all my plans.