The Famous Poet and Me, part one


The acclaimed poet was speaking extemporaneously recently to a gathering of writers, teachers and others assembled for a writer’s conference in Homer. He seemed comfortable and at ease at the lectern, but not too long into his remarks he began to lose track of his thoughts, forget the questions he was asked, and drift far afield of the subject. Often he stopped and asked the audience, “Does that make any sense?” and “Where was I?”

The longer he went on, the more uneasy I became. As someone who has seen Alzheimer’s disease up close and personal, I read between the lines and saw things that disturbed me. Afterwards, to a friend who asked what I thought of his remarks, I said as much. She was surprised at first, then said she could see what I meant but hadn’t identified it as such herself. She is a spiritual counselor, and as his remarks had to do with a subject close to her interests, she had paid attention to that aspect of his talk.

Nonetheless, his demeanor had bothered me so much that I decided to skip an evening gathering during which he read his own works. Later in the workshop, he once again addressed the group as a whole, and again he exhibited the same problems. I wasn’t sure I could go through this again, but I was sitting front and center and saw little room for escape without disturbing everyone.

He called for questions. One man asked him why his persona seemed so different the night he read his poetry and now.

“I think I might be agoraphobic,” he answered. There was a long pause as those words sank into the psyches of the assembled writers. He also said that when he reads his own poetry, he is lost in the meaning of the poem.

Then, “I am operating on no sleep here, people. I don’t know how you Homerians… Homers… Homerites do it!” The room exploded with laughter, and I relaxed.

Li-Young Lee, world-acclaimed poet, was experiencing the Midnight Sun of the north country for the first time—and losing a lot of sleep because of it. It’s a common malady that strikes visitors to our state. 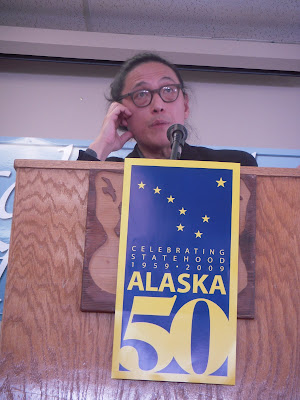 “When does it get dark?” a tourist asks.

“September,” I answer, knowing full well he is asking about that particular day, not the future. I may have been exaggerating by a couple weeks, because by mid-August it does get dark at night, at least for a little while.

Right now, less than two weeks past the summer solstice, we are relishing our long summer days with more than nineteen hours of official daylight—sunrise to sunset. But, it really doesn’t get dark at all. Teams play baseball at midnight on the solstice, people fish all night, kids play outdoors till late. No artificial light needed. I’ve caught myself mowing lawns close to midnight, unaware of how late it was. I’ve picked up litter at midnight and the visibility was fine, better than having the slanted rays of a setting sun in my eyes as I walk along a highway ditch at 10:30 p.m. 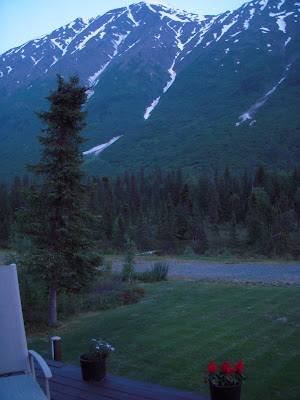 I suppose it takes some getting used to, though I’ve lived in Alaska since 1948 and to me this is how it’s supposed to be. I’ve been in places south of Alaska where it gets dark at night, and I always think it’s such a shame, and a waste of summer days.

These long days have some drawbacks. Fireworks on the Fourth of July are a bust! Which brings me to the whole point of this story.

This Saturday, the Fourth of July, umpteen-gazillion people will gather in Seward, Alaska, for the mother of all marathons. Boston Marathon, phfft! New York City Marathon: fughedaboudit. Seward’s Mt. Marathon runner’s race has them all beat, even if it is barely more than three miles long.

Yes. That’s not a typo. Three point one miles long, to be exact, and it still puts those twenty-six plus mile races to shame, because Seward’s race is a mile and a half up a mountain, and a mile and a half down a mountain. From a few feet above sea level on Seward’s main street, to the thirty-two hundred foot peak of Mt. Marathon, this is no race for the weak of heart—or legs or lungs for that matter.

While the Boston marathon is the oldest organized race (1887), the Mt. Marathon race vies for second oldest, along with some others that are probably wimpy races by comparison.

It began, fittingly enough, as a bar bet in 1908 when a bartender bet a customer that he couldn’t run up and down the mountain in less than an hour. On the Fourth of July the runner took off, and failed—by two minutes. His name was carved in the baroom wall, and challenges offered. In 1915 the Mt. Marathon became an organized race run on the Fourth.

The fastest men’s time is 43:23 in 1981 by Bill Spencer; the fastest women’s time is 50:30 by Nancy Pease in 1990. Men and women run at different times, and the pack is limited to 350 runners. Juniors are limited to 200. The average time up the mountain is 33 to 40 minutes, 10 to 15 coming down. Blood is a common sight on the runners, as they climb rock walls, claw their way through alders, bounce down scree fields, slide on patches of snow, and hope the bears stay away for the duration.

The small seaside town is snuggled up to line of mountains with only a few blocks between straight up and salt water. It will be packed with ten or twelve or fourteen thousand visitors, plus the usual suspects. Parking is nowhere to be found. The streets are lined with vendor booths of all kinds. The runners take off from the main street of town and it’s all uphill from there to the top of the mountain. Then, veering slightly from the uphill trail, the race takes the shortest, straightest route to the bottom, and finishes on main street. Protective gear is highly recommended and injuries of some sort are probable. A pre-race safety meeting is mandatory. Climbing aids, including metal cleated shoes, are not allowed.

Usually, I stay away. Too much traffic just to get there; too many people once I do get there. This year, though, with the responsibility placed on myself with this blog, I am reconsidering. I thought about taking my travel trailer to Seward and parking it at the city's oceanside RV park. That would give me a haven to escape to if the crowds get to me. I called Parks and Rec. Thirty bucks a night and they are already almost full. I’d have to take it down today, stay through the Fourth. One hundred and twenty dollars. I could come home at night—except for the Fourth—and have my sanctuary available in Seward. 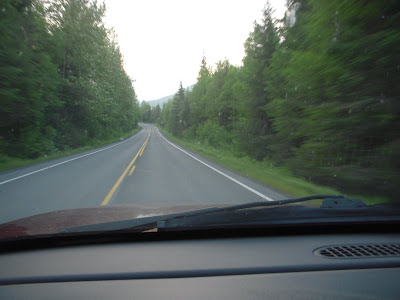 The two lane major (and only) highway leading to Seward.

I’m considering it. I could also wait until the Fourth and drive down if I can get out of my driveway. Oh, my Lordy, the traffic! The highway that runs past the front of my house is the ONLY way to drive to Seward. Those of you who live in places where roads criss-cross the country like a huge spider web have no idea. Here it’s one road, two lanes, 55 mph, paved end-to-end with motorhomes.

Every time I think about going, I am reminded of a truth I discovered when I was 23 and moved to a small (pop 100) ski town. The farther away from concrete and asphalt I lived, the better off I was. Over the years, that truth evolved into a whole theory about why mankind is so screwed up, but I won’t go into that now. I’m trying to decide whether to hook up my camping trailer.