The Famous Poet and Me, Part Two

We lasted three hours, did Pablo and I. Three hours, including dinner, in the big city of (pop. around 3200). That might set some kind of record for camping trips.

I debated all afternoon about my idea to take my RV trailer into Seward, set it up at the city’s RV park, plug into the city’s electricity at thirty bucks a night, and stay until after the Fourth of July when the highway would once again be passable. What finally made up my mind was my lawn mower. My beautiful John Deere lawn tractor refused to start. Sudden, catastrophic, chronic refusal to start. 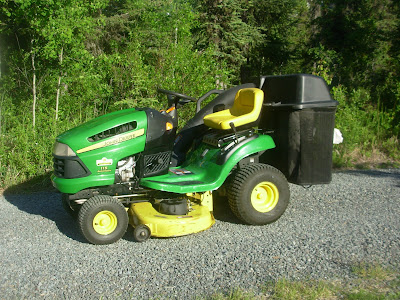 Deere John, whatever ails you?

I messed with it all afternoon before declaring it DOA. The battery refused to take a charge. What the heck, may as well go camping in Seward. So, I threw a few things in the trailer, stuck a hose in the water inlet hole, turned on the propane bottle, and started the refrigerator. Knowing that I could easily drive home for more stuff, I took only what I thought I’d need for overnight.

I seat-belted Pablo’s travel cage in the shotgun seat of the truck, went back in the house, and asked, “Do you want to go?” He knows that word “go.” It means get out of the cage and see what happens next. Sometimes it means go up to the loft; sometimes it means getting a bath in the kitchen sink; and once in a while, it means we’re going somewhere. He climbed right on my hand, and out to the truck we went. I set him on his perch and he started making happy noises right away. Off we went to Seward, thirty six miles down the road. Forty-five minutes later I pulled onto the road that runs alongside Resurrection Bay (so named by the Russian explorer and fur trader Alexander Baranov when he spotted this inlet into Alaska’s southcentral coastline on Easter morning in 1792). The beach was carpeted with motorhomes, RV trailers, campers, etc., of all kinds, shapes, and sizes. At the entrance to each of the several camping parks were signs: “campground full.”

I backtracked to the baseball field that had been turned into a no-facility campground and pulled in. Half-way around the circuit, I backed my trailer into the only empty space, between a trailer and a huge motorhome, its generator purring away. At 6:30 p.m. it wasn’t a bother, but I realized it might be a different story at 11 p.m.

A half hour later, I was disconnected from the trailer, had the trailer somewhat organized, Pablo happily ensconced in his spot, and was considering what to do for dinner. Then came a knock on the sidewall of the trailer. The people next door were home.

“You’re in my parking place!” said an angry man. Whoa, Nellie, I thought. I told him I believed I was in an empty spot, pointing out the white lines on either side of me. He didn’t want to listen, kept interrupting and insisting it was his parking place, his language sprinkled with a few cuss words, but no “F” bombs.

I told him, nicely, that I’d never heard of such a thing as a parking place alongside an RV spot in this kind of layout. Again the same message from him, liberally larded with “damns” and “hells.” He told me to get out. I told him I’d go up front and see if I could find a manager or a layout map. He told me he didn’t care and to get out of his parking spot.

About this time I decided that even if I was right, I didn’t want to camp between a generator and an old grouch. I tried to suggest that he let me leave the trailer there for a half hour while I went to find another place. He wouldn’t let me talk. I asked him to please listen to me for a minute and we could work this out. Finally his wife put her hand on his shoulder, and only by that intervention was I able to complete my suggestion.

He told me to take the trailer with me. I said I was more maneuverable without it, didn’t want to drag my parrot all over town, and that I’d be back in no more than half an hour. He told me he didn’t give a damn what I was suggesting, to get the hell out of his parking spot and take the damn trailer with me.

His wife said, "Okay,” grabbed him by the arm and led him towards their trailer. “I don’t have any place to park!” he yelled. I suggested he park where my truck had been.

I soon found another spot—an old gravel parking lot, $20 for overnight parking. Narrow little spaces, no facilities but Red’s hamburger wagon next door, luscious aromas of charcoal grilled burgers wafting through the air. I went back to get my trailer. I hadn’t been gone ten minutes. The wife came out to move her truck when she saw me.

I took her by the elbow and said, “I hope YOU have a nice visit in Seward.”

“I know,” she said, and the look that passed between us was one all women understand. We love them, marry them, try to back them up, but there are times we have to keep our mouths shut and only wish things had gone a different way. In a few minutes, Pablo and I were out of there.

My newfound spot was far from ideal. Tolerable in a pinch, but not enjoyable. Before I did anything, I wandered around the lot to see if there was a more amenable site, but far enough away from Red’s burger stand that I didn’t wind up with an aversion to hamburgers for the rest of my life. In my walk, a tall, nice-looking man came out of his camper and asked me what the heck was going on.

“I just arrived from Valdez, and it’s dead over there. Why are there so many tourists in Seward?”

“Fourth of July,” I said, and seeing his quizzical look, I added, “Mt. Marathon race. EVERYBODY comes to Seward on the Fourth of July.” I pointed to the mountain that rose to 3200 feet right beside us, the upper trail plainly visible above timber line. We talked Alaska and fishing for a while, and he said he just might stick around to see that race. He could watch it from the comfort of his camper.

I went back to my rig, set the trailer up, unhitched, and Pablo and I went off to the Peking Palace for some Chinese take out. Back in the trailer, Pablo chowed down on chow mein noodles while I pondered what to do as I nibbled at my sweet and sour pork and eggroll. Didn’t take long. While the handsome fellow from northern California with whom I’d just talked had taken some of the sting out of the confrontation with the Old Grouch, all the fun of this adventure seemed to have leached out. No longer was I interested in coping with the hordes yet to descend on this small scenic town by the sea. This dusty old parking lot had no charm, and twenty bucks a night was too much.

I hooked up the trailer again, and Pablo and I got out of Dodge—three hours to the minute. I stuck a note in the cash slot telling the attendant that I’d left an hour after I arrived. I wondered if they’d cash my check anyway.

Fourteen miles out of town I pulled off to the side of the highway and took several shots of the mountains. Cottonball clouds drifted along the face of several mountains tinted mauve by the setting sun, and the haze that had been in the air for the past few days lent a gossamer, ethereal effect to the landscape, much like the paintings of Sydney Laurence, Alaska’s famous artist who painted scenes using the tonalist technique, the coloring of the atmosphere. It’s a technique I like but didn’t know the name of until I Googled Laurence and “tonalism.” I also have a tendency to ascribe colors to the atmosphere, calling the air golden, silver, pewter, mauve, or sky blue pink. 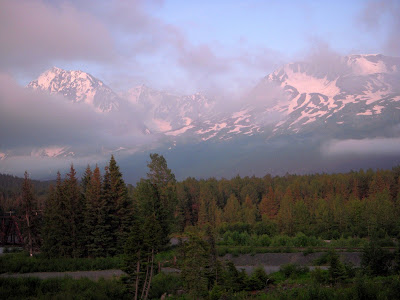 Beside me, Pablo had chuckled and chortled, whistled and chattered, completely enjoying this excursion on the way into town. On the way back he was more docile, no doubt from a tummy full of noodles, but still a pleasant companion. 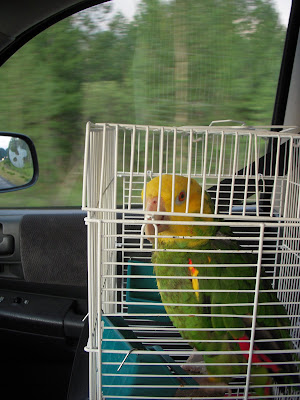 As I turned off the highway into my driveway, I felt the tension wash out of my shoulders. The spruce and birch and aspen growing alongside my driveway welcomed me back, and as I pulled to a stop in front of my house, I realized a truth. While grand adventures can be found in letting Wanderlust take you by the hand, sometimes it can lead you right to where you wanted to be all the time: home.

And, I also discovered that along with Li-Young Lee, I just might have a touch of that agoraphobia thingy myself. 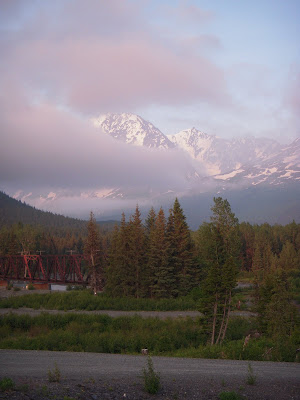 Mile 14, with the Alaska Railroad trestle over Snow River in the lower left.