I don’t Twitter or Tweet. Have no intention of doing so, either. Not around the technology to do so, for one reason. Other is…..guess I’m just not interested. I will admit to checking my favorite blogs two or three times a day. It helps that my blog updates the info on those blogs, and by scrolling down to my “Friends,” I can see if they’ve added a new post.

However, occasionally little things pile up—things I’d like to tell you about that don’t seem to merit their own separate story. So, to clear the table, here’s Gullible’s Gazette:

Item One: Earth Mother is sad to report the little guy didn’t make it. The baby weasel I found in a roadside ditch lived two weeks and a day, then died from unknown causes. Earth mother consulted a 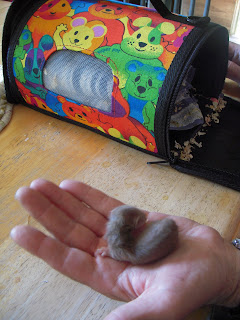 veterinarian, who agreed to a necropsy. Then they came to their senses, and said, “Wait a minute….”


Item Two: June. After eleven glorious days in Homer and Halibut Cove, I came home to a steady downpour all day Monday, new snow on the mountains (RATS!!!), a thoroughly outraged parrot, a 5.6 earthquake whose duration brought eerily familiar thoughts of THE BIG ONE in 1964, the one that lasted five and a half minutes. 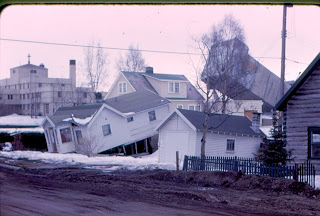 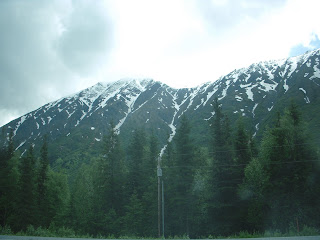 New snow on the mountain tops.

Item Three: June. My friend Betty who is somehow distantly related to my late husband’s family, has moved back into her home after completion of repairs and clean-up necessitated by a fire last winter. Betty is a remarkable lady who is in her eighties and has a wealth of stories to tell. I visited with her today for a few minutes as I was doing the mail run . We deliver Betty’s mail to her front door, rather than placing it in the mail box by the highway. As I was leaving, she cautioned me to park close to the door because some brown bears have been visiting her yard lately.

Item Four: June. While Captain Jim steered the Far Side across to Homer Sunday morning, Mrs. Captain Jan and I told Halibut Cove stories. After I finished one, Jan said, “You’ll be moving to the Cove soon.” Nice thought, but Halibut Cove—like —has priced itself beyond my pocketbook. 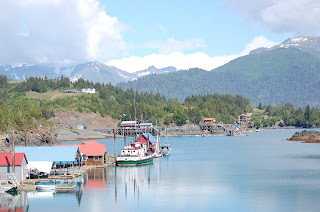 Item Five: I don’t seem to have any travel plans for July. How’d that happen? Oh, yeah, now I remember. An ice jam on the Yukon River scraped much of the town of off the map. That was my intended destination for July. I’d also considered . Have to think about that. 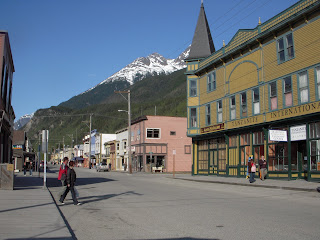 
Item Six: It’s the latter part of June. My face and arms are tan, and my legs are no longer fish-belly-white. So how come I had to wear a fleece jacket and insulated gloves to mow the lawns today? Not fair, that 54 degrees, partly cloudy, and windy.

Item Seven: OMG! Is there anything as delicious as fresh halibut?

Item eight: The new AARP magazine has an interesting interview with Elmore Leonard, in which he talks about where his story ideas come from. Also a great writing quote: “Try to leave out the part readers tend to skip.”

Item Nine: Memo to self: next time you take your travel trailer on a trip, your truck battery won’t die if you remember to install the trailer battery….

Item Ten: Want to know what happens when writers get rejection notices? Check this link, and looks for the Friday, June 26 post: http://authorculture.blogspot.com/2009/06/fabulously-fun-friday-star-trek-on.html

Item Eleven: July 14. The road construction area claimed a Honda as a victim by puncturing its crankcase, causing it to bleed black oil. When the red light came on less than ten miles down the road, they pulled over next to where I’d parked my truck while I picked up litter in the ditches. One of them is a cook at the famed Double Musky Cajun restaurant in Girdwood. Way back when I was a young whippersnapper, I worked as a cook for Julian, the original builder/owner of the Double Musky, but it wasn’t Cajun then, just a great place for the 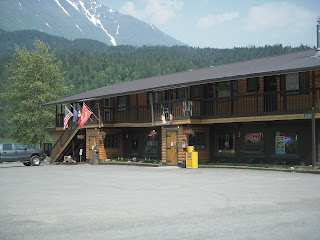 ski crown to hang out.


Trail Lake Lodge in Moose Pass, the one I used to
own.

In May, I attended Julian’s 80th birthday party in . Today, one of Julian’s daughters is cooking at the restaurant in that my husband and I started and then sold. Things have a way of coming full circle, don’t they?

Item Twelve: July 14. A motorhome pulled over to the highway shoulder and waited while I ambled through wildflowers and tall grass, filling a large yellow bag with beer cans, soda bottles, assorted pieces of paper, and all the rest of the flotsam and jetsam I found. Then the driver crossed over to talk. When he learned I was a volunteer, he asked if he could take my picture. He was going to try, he said, to get volunteers on his favorite island to do what I was doing. “This place is spotless!” he marveled. I looked back at the seven bags of trash I’d filled over the past mile. 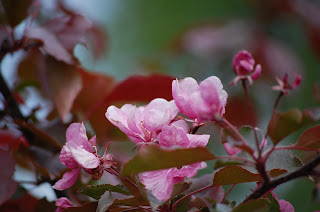