Waiting until the coast is clear...

I waited until the coast was clear—after the Fourth of July weekend. Hopefully, the hordes of holiday visitors had emptied out of this end of the on the . In case you haven’t heard, , is THE place to be on the Fourth.

There’s a traditional parade, usually with an Iditarod dog team pulling a wagon or cart, the streets are lined with vendors, baskets of beautiful blooming flowers hang from old-fashioned lamp poles on the main street, and there is not one single spot of land left on which you can park an RV or pitch a tent. Everybody is there.

Except me. I chose to stay home and not aggravate my self-diagnosed agoraphobia.

A week before, on the evening of July 1st, I thought I might join the festivities this year and report on them through this blog. So, I’d hitched up my little light-weight travel trailer and driven the thirty-six miles to Seward. After getting squabbled and sworn at by some old grouch who said I was camped in HIS parking spot, then paying $20 to park in a dusty gravel parking lot, Pablo and I headed for home, and Seward saw no more of us until July 7, when I had some errands to run down there in that little town by the seaside.

And that’s why I won’t have any pictures to show you of the main reason folks go to Seward on the Fourth: the race. If you want to know about that, go online to www.adn.com. That’s the paper that ran extensive coverage of the footrace up and down the 3200 foot mountain. Instead, here’s a couple pictures that show the mountain and the course. Look for the light brown “Y” shape on the mountain. Those are the up and down paths. These photos are a little obscured because of smoke from wildfires.

Also, clicking on each photo will enlarge it so you can see more than your ever wanted to see. 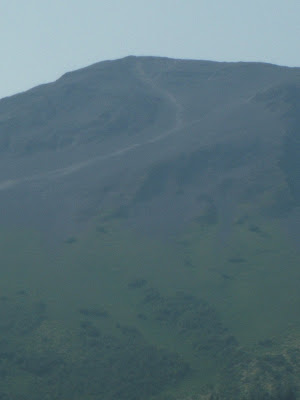 Look for the faint light paths in the shape of a "Y." 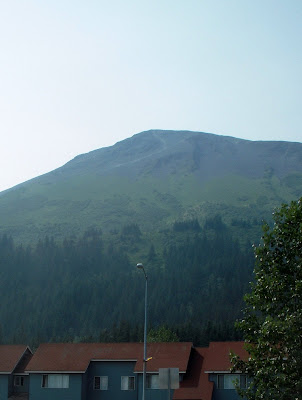 What I do have to show you, though, is what I came across in Seward AFTER the big weekend. First I should tell you that a big high pressure system had parked itself over this part of the state a week prior, and the weather was pure heaven. It certainly was too hot to be running up and down a mountain for fun and/or fame, and the cooling breeze that the contestants usually could count on near the top of the mountain instead felt like getting blasted with a hair dryer on high. That might explain why the front runners in both the men’s and the women’s races collapsed near the finish line, and the second persons in line won each race. 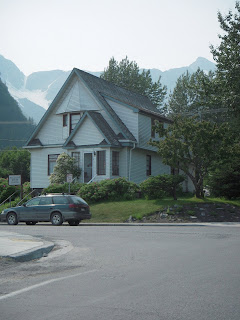 But on the 7th, the high was still in place and the day even warmer than before. On the way to one of my destinations, I passed the historic Ballaine House, now a lodging establishment, which sits in a prominent place on “Millionaire’s Row.” 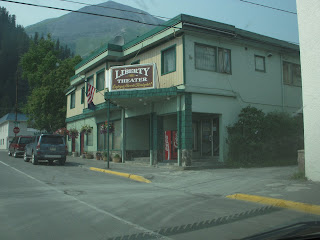 Then I turned and passed the Liberty Theater, where thirty years ago I could have purchased a soda to drink with my popcorn while I sat in the eclectic seating and watched a first run movie. Playing that night: “Ice Age.” Most appropriate on this hot summer day. I love this little small town movie house, owned and operated by my friends Skip and Marie. Somehow it makes me feel like a teen-ager again, perhaps because it reminds me so much of Saturday-afternoon matinees at the long gone Empress theater in where I grew up.

I looked down the main street. The large building at the end by the water is the . It’s primary purpose is scientific research, but is does have a number of exhibits of marine mammals, fish, etc., for the public to see. The sail shape at the right covers the marine bird exhibit, where you can see various marine birds, then go downstairs and watch them “fly” through the water. 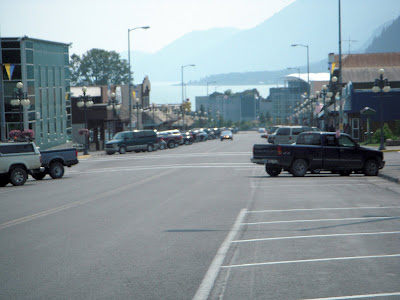 When I parked in front of City Hall, I saw something I’d never seen before: every window capable of being opened was propped wide open, and fans were blowing in many offices. 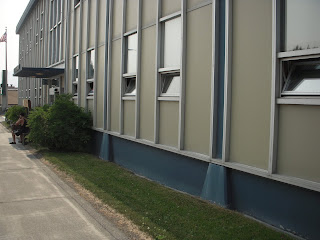 Then I decided to see what the waterfront campgrounds looked like. A block from City Hall, I turned onto the road that skirts the city along the shore. There’s a milepost marker commemorating the official start of the Iditarod Trail—not the race itself, but where freight bound for

the gold fields was unloaded and then carried by dog team, horse, foot, and whatever into the far reaches of the territory.

Nearby is a memorial marker of the trail, in memory of a young Jr. Iditarod friend of mine, who died tragically young after hitting his head while running his team on the . 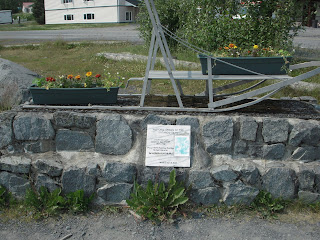 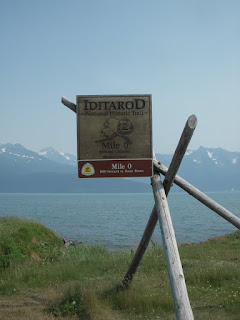 I passed the kids’ playground,and the skateboard park, empty on this hot and sunny day but for one young fellow, with requisite knit cap. He's really hard to find, slouched on the far wall about in the center. 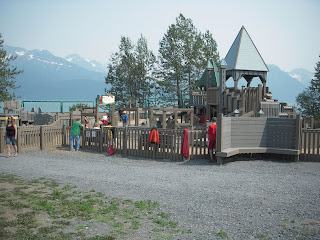 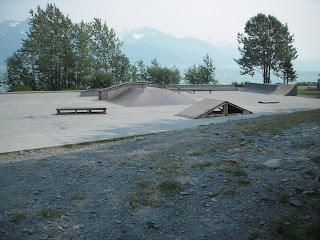 Then I reached the RV park. This is an unbelievable sight. No people in fleece jackets huddling in their RVs. Instead, they’re searching for a breeze while sunning in folding chairs along the salty shore. 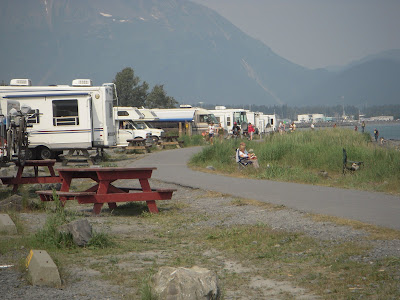 Something unusual caught my eye and I drove into the RV park. Little did I know then that “unusual” was to be the catch word of the day. At first, I though it was a three-wheeled car, a la Isettas and Daks, but this turned out to be something else entirely. 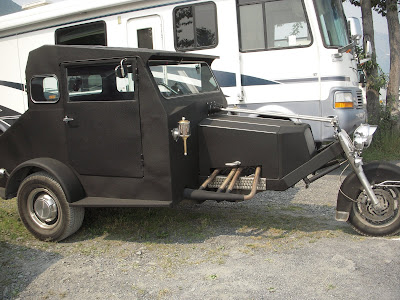 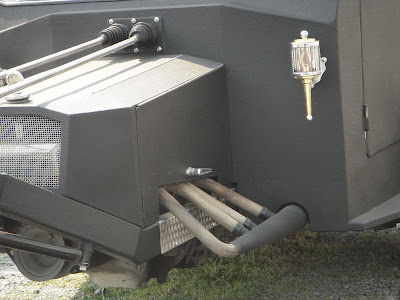 This is an enclosed motorcycle. Here’s a shot of the inside: 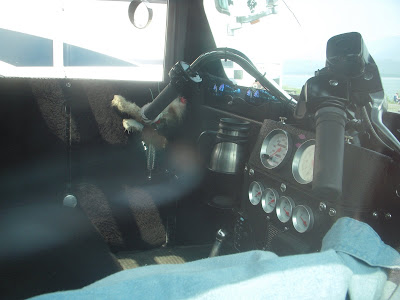 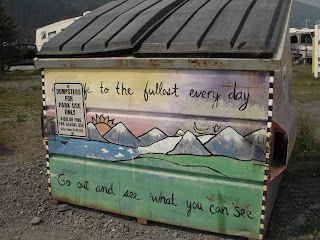 I was hooked. After taking the photos above, I saw this on my return to my car:


And this wildflower mosaic on the restroom building: 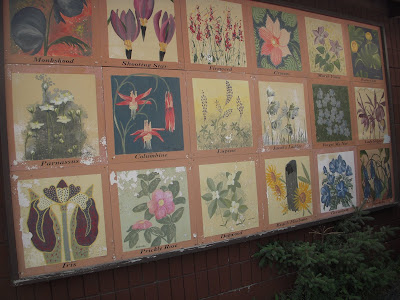 Then, a shade chair with canopy, a satellite TV receiver on a picnic table, a “tricycle,” TWO satellite receivers and enough equipment to require a semi to haul it all, folding chairs for a large audience, a doggie pen of “ornamental wrought iron,” another decorated dumpster, and a walking/biking path that actually had so many walkers and bikers on it that it was causing a traffic jam at the intersection. 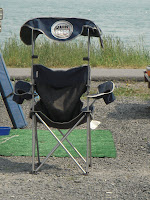 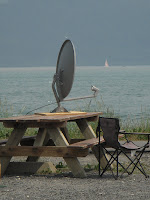 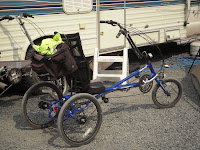 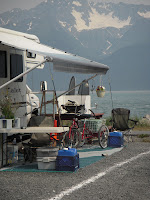 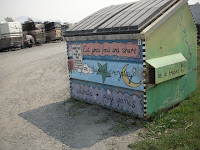 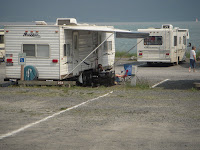 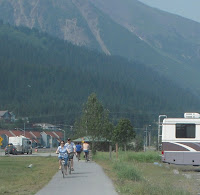 After waiting a few weeks for all the walkers and bikers to pass, I pulled across and stopped my car. There was one more thing I wanted to take a picture of. This sign: 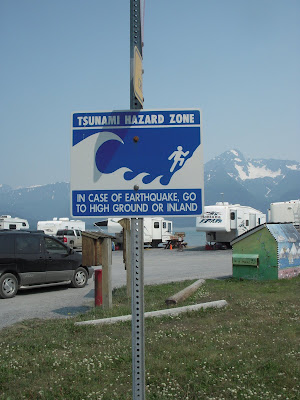 My very favorite sign in all of Seward. More about this some other time.