(NOTE: double-clicking on each photo will enlarge it to full screen.)

This is a seagull, guarding its nest. It wants only to feed and protect its young. 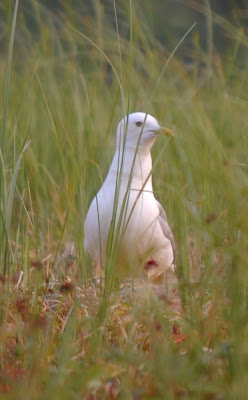 These are two of the seagull's young. Very soon the lake will play host to returning red salmon, there to spawn and die. The adult gulls will leave, and the young gulls will remain to fend for themselves on the dead salmon. 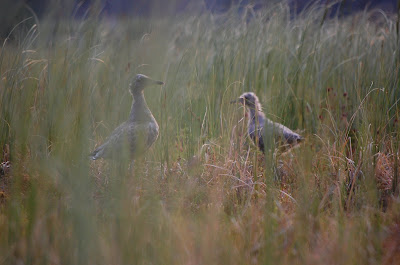 This is an Arctic Tern. It wants only to feed and protect its young. It flies ceaselessly, hunting for the small fish that live in the lake. With incredible flying skills, the tern spots its prey, hovers, plunges headfirst in the water, and lifts off with the fish captured in the tern's long sharp bill. 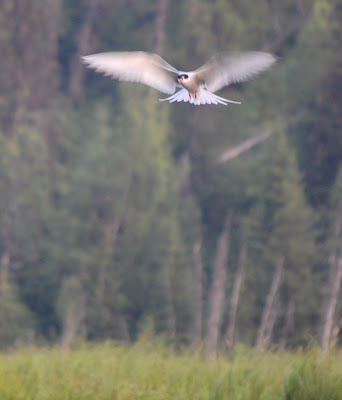 This tern takes great exception to a seagull nesting too close to its own, and tries to drive it away. The gull refuses to leave its chicks unprotected. 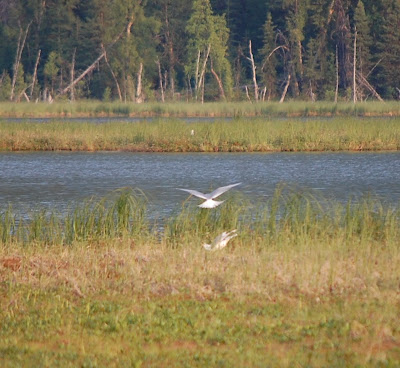 This is a young tern, waiting for a parent to bring it a small fish. 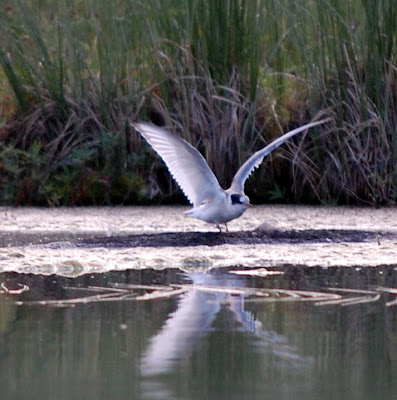 As do these two terns. 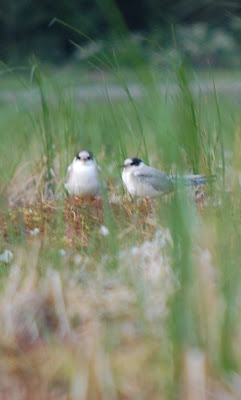 The adult tern has brought a small fish to the baby tern, and a yellowlegs sandpiper breaks off its search for small invertebrates and rushes over, probably hoping to find scraps. 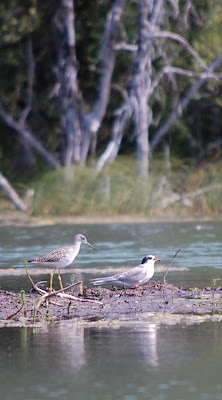 These Common Loons guard their young fiercely. They want only to feed and protect them. 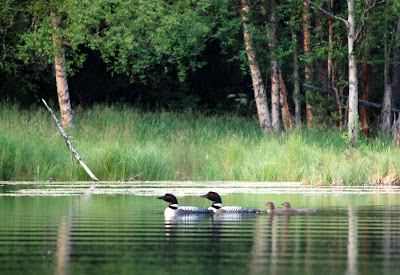 The male acts as a decoy and as the young loons dive for safety he will go to endless tricks to lure a predator away from the female and the two young. Here it has "walked on water" for a second or two as a threat ("Look how big I am!") towards an intruder, and is lowering its body to the surface. 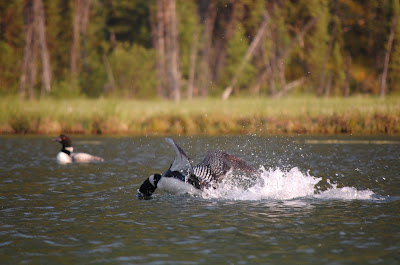 This female green-winged teal wants only to feed and protect her young. She leads them away from possible danger, finding them a safe haven in the tall marsh grasses where their drab duckling colors are the ideal camouflage. 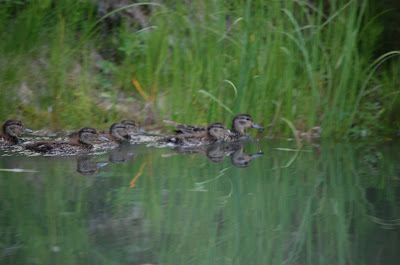 The male green-winged teal waits beside a young tern, almost as if protecting it. The adult terns pay no attention to the duck, but the duck rushes over when the adult brings food, perhaps hoping the youngster will drop it. 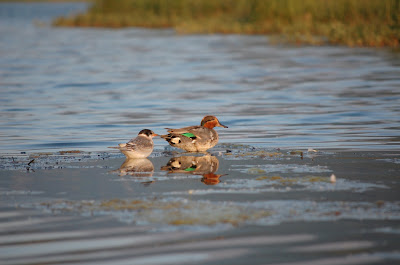 A female mallard escorts her young on a late evening feeding outing. She, too, is highly alert to danger. 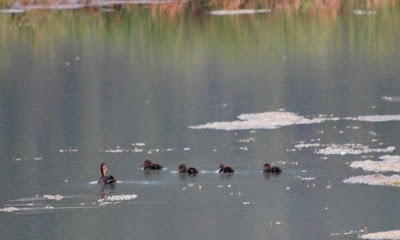 Male and female red-breasted mergansers are alert as they bask with their brood on a floating platform, taking a time out from their fish hunting. 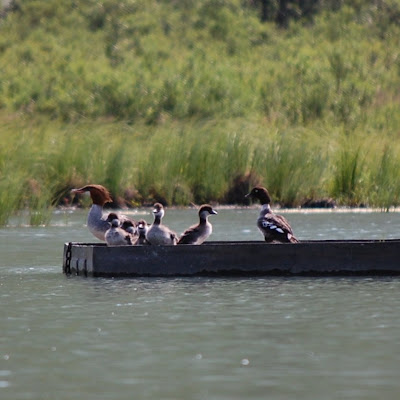 At the least hint of danger, they rush the brood away to safety. 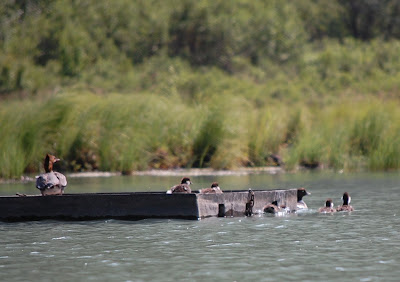 High in a cottonwood tree, a bald eagle guards the nest while its partner searches for food to feed their young. Eaglets will not fledge until August. 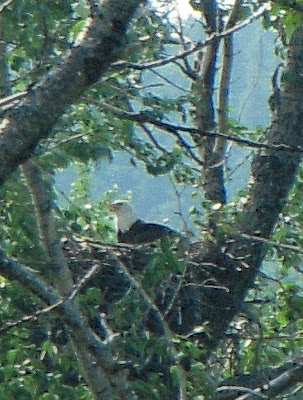 The loons spot it first and sound the alarm. Then the gulls rise into the air, screeching and squawking. The terns join in, chipping and chirring, and soon the entire squardron of gulls and terns join forces to drive the predator away. 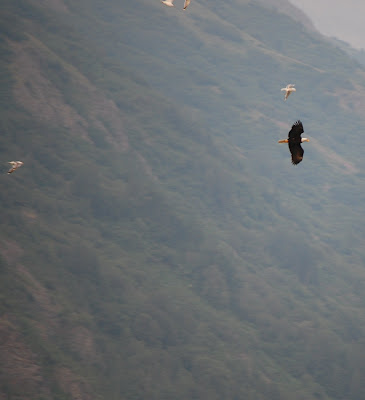 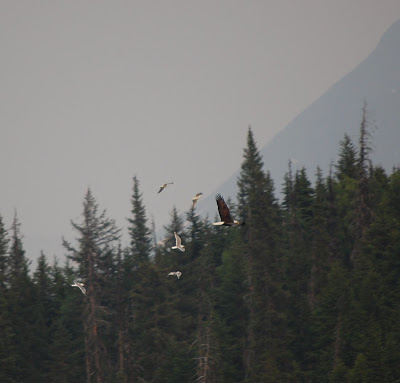 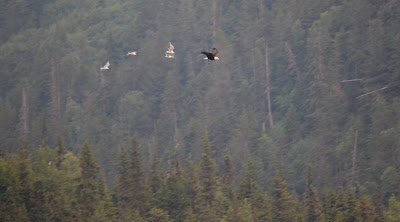 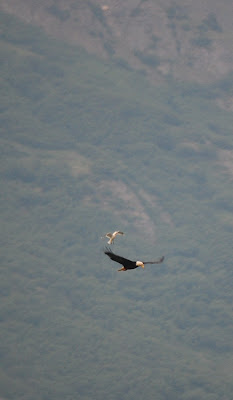 The eagle lands in a treetop on the far side of the lake as the gulls and terns break off the chase and return to their young. 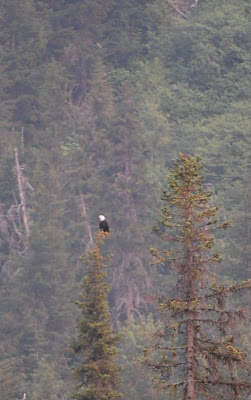 Two gulls take offense at its close proximity and fly across the lake again to harass the eagle. 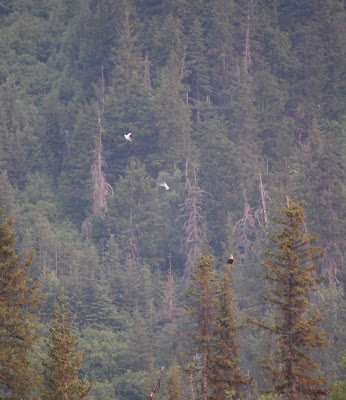 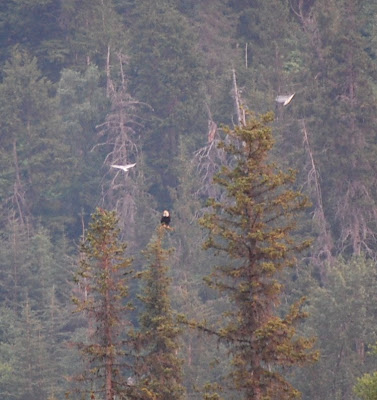 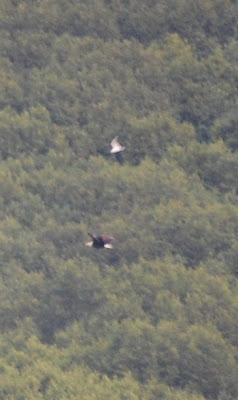 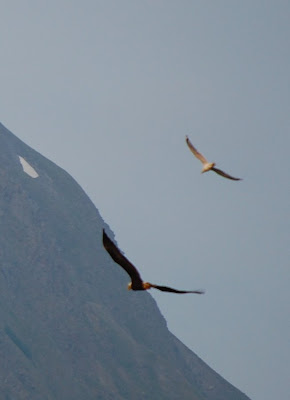 Soon more birds join in pursuit as the eagle flies too close to the nesting grounds. 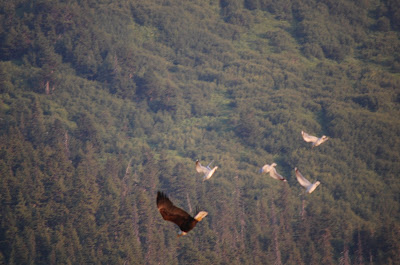 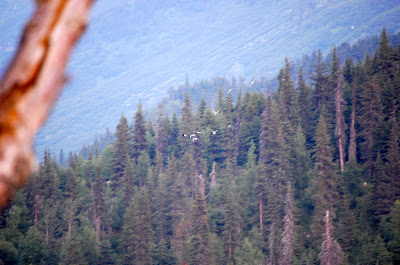 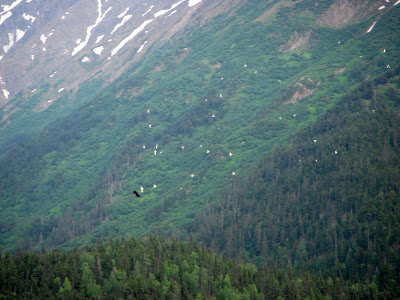 Finally, the eagle flies away from the lake, and the pursuing birds return, content that once again they have driven the predator from their midst.

They do not relax their vigil, however, because the eagle returns often, swooping low to snatch a young bird or an adult. The predator's strong, sharp talons can lift a thrashing salmon from the water and fly away with it. It, too, has young to feed.

The terns return to their endless hunt for small fish. The loons fish also. And the gulls? Other than begging for food in the parking pullout, I don't know what they feed their young. They are not above snatching another's chicks, though.