Things that Go Bonk on the Head

I think it was my last concussion that did it. One moment I was shuffling through a couple inches of new snow, and the next I was flat on my back telling myself I wasn’t getting up from this one unscathed.

My feet flew out from under me and the back of my head took the full force of the fall. As I lay on the once-disguised patch of ice staring up at the dark winter sky, I took inventory of all my parts and appendages and determined that everything was intact and still properly connected, i.e., knee bone connected to the ankle bone, etc. As the old saw goes, I didn’t get hurt because I landed on my head.

After I picked myself up and brushed myself off, I went back to the house and decided to sit down for a while. An hour later, I called my friend Terry who is on the emergency rescue squad for She drove out to check me over, and then took me to the ER in Seward for a more complete exam. And she talked all the way. I just wanted to go to sleep, which is exactly what she was trying to prevent. But, man, can she talk.

A CT scan later, she drove me home. I was a half bubble off for a while, and had a headache, but eventually everything seemed to return to normal. Everything except for one thing: I have had to renounce my self-anointed title as the Queen of Motion Sickness. It seems from that time forward, I no longer get sea sick, car sick, air sick, you name it—it doesn’t make me crawl into a cool, dark corner, keep my eyes shut, and wish I were dead. 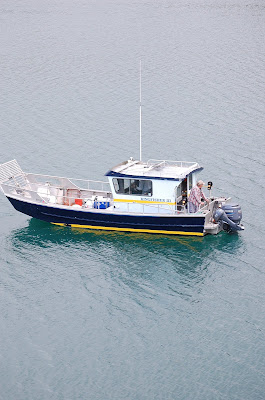 Which is why a recent halibut fishing trip will forever be a highlight in my life. Up until that day a few weeks ago, I had never caught a halibut. I’ve certainly tried. I may even have hooked some, but somebody else had to reel them in, because I was hanging over the rail and flat out miserable.

The last fishing charter I went on was a long, long time ago. I paid $140 to go. Five minutes out of the harbor I was looking for a place to lie down. And but for a brief few minutes trying to fish in fifteen foot seas with a ferocious current, that dark corner is where I spent the trip—when I wasn’t on my knees hanging through the rail.

Since that last time I landed on my head, I’ve crossed in blizzards, sailed out to the Great Barrier Reef on a huge three-deck catamaran with waves crashing over the top deck, crossed on a cruise ship, and tempted the gods of mal de mer in every conceivable way possible. I think I’m cured. 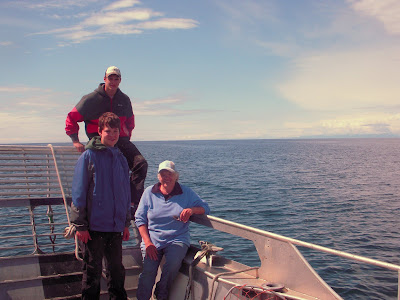 Garrett up top, Daniel, and Gullible

It doesn’t make any difference that the seas were calm the day I went fishing with Grant, four of his grandsons, and a visiting cousin. I could get sick standing on shore looking at a boat. I once had a job that entailed keeping track of everything that came off a supply barge. The barge dwarfed the harbor pier where I sat in my truck, so much so that it seemed the pier and I were moving rather than the barge. I had to turn the truck around, and watch the materiel as it came off the barge. 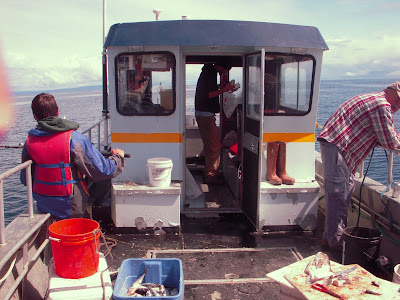 Daniel (left) with the touch of a fisherman

I landed the first fish of the day, a nice Pacific cod. 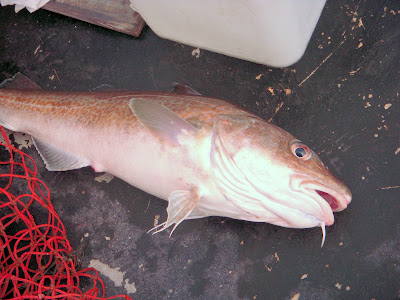 Then came my very first halibut—small, but just the right size for eating. The boys seemed to eat non-stop when they weren’t reeling up fish from a hundred feet deep and more. The food smells didn’t bother me, and I even ate a nice piece of strawberry rhubarb pie that Daniel and Sam’s mom had sent. In my previous life, when I was Queen of mal de mer, a mild American cheese sandwich on plain white bread with butter and a 7-Up were all I could eat. And, for god’s sakes, keep the nacho chips away from me, please! 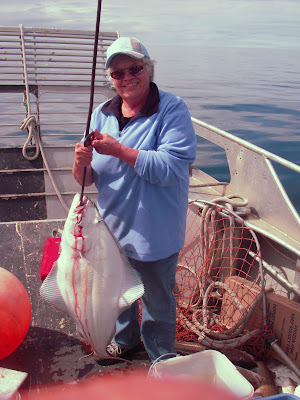 Let me tell you a little something about halibut. It is one ugly fish. When it's hatched, it swims like a normal fish and has an eye on each side of it head. Then at about six months, it gets lazy and decides to lie down for the rest of its life and be a flatfish. One eye apparently gets tired of looking at nothing but the ocean floor, so it migrates on over to the upper side. Really. I kid you not. Okay, so I'm paraphrasing the Alaska Fish and Game site info, but it's really close to the truth.

Now, halibut can live several decades and grow to more than 700 lbs. The largest ever sport caught was 457 lbs. in Alaska, and many are two or three hundred lbs. They're called "barn doors." But the best eating ones are in the twenty pound range. Mild, tender white meat. 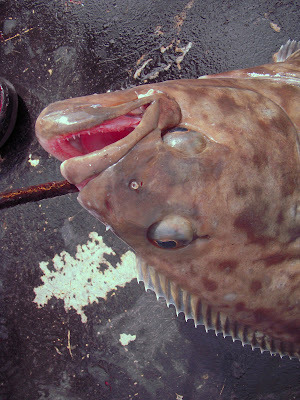 Up close with a halibut

Warm sun, good fishing, and no stomach qualms whatsoever. Now, that’s a great way to spend the day, especially with Mt. Augustine, an active volcano, looming in the distance. 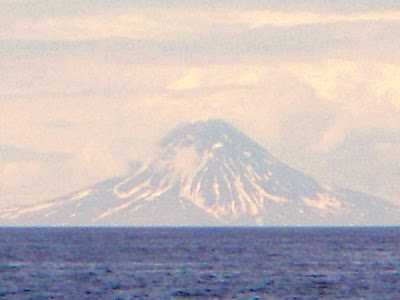 Mt. Augustine, a real live volcano which last erupted in 2006

Not too long ago I was in the ER again, and again with another MRI of my brain. The doctor said I had vertigo, and somewhere in this house I have three prescriptions of Meclazin, an anti-vertigo medication. Each bottle has only a couple pills missing. He said something the size of a grain of sand rolls out of position in our ears, and that can cause dizziness and vertigo. 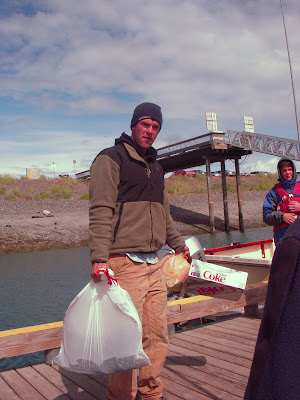 I’ll trade a few bouts of vertigo for motion sickness any day, no question, especially if it means I can bring home a nice halibut once in a while.

But the best part of this fishing trip, the very best, was spending time with Grant's grandsons and seeing what fine young men they are. Sigh, I knew their mommies when they were little girls.

(Monday, 1:30 a.m. ADT: It is with no little chagrin that I am posting this story right now because I just got home from the ER after another waltz with vertigo. While I was sulking in my chair waiting for my friend Kathy to arrive and take me to the hospital, I thought about this story that I'd prepared yesterday, and of how much I was tempting the gods of mal de mer. I felt so rotten, I almost took back my trade of motion illness for vertigo. Now I'm home and all is well, but never, NEVER!, have I seen the ground move before like I did this afternoon, nor have I ever had to crawl back into my house to keep from toppling over. And it wasn't from any earthquake either.) 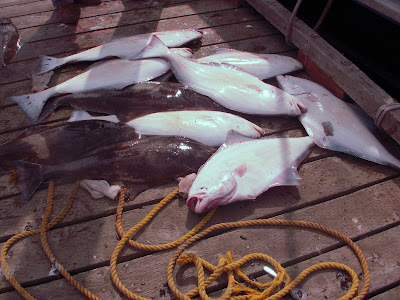 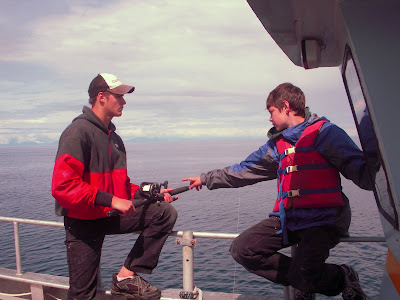 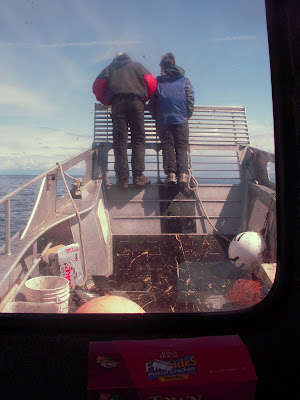 Below, David holds the pole while cousin Sam reels in a halibut. Sam holding the largest cod of the day. David releasing a skate. A split second later, the skate turns over and heads back to the bottom. 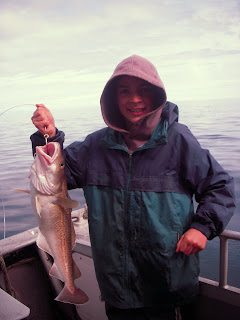 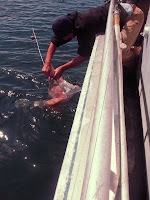 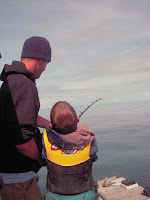 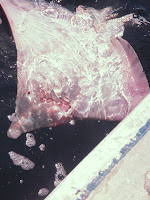