My Kingdom for a Sack of Trash

The following photos of tonight's sunset at Tern Lake are brought to you courtesy of a sack of forgotten garbage.

I'd loaded up the truck late this afternoon with trash and recyclables, and drove the twelve miles to the Crown Point transfer site where we drop our trash into huge green semi-bear-proof containers. I stopped at several pullouts along the way and picked up litter, which I also loaded into my truck.

When I reached home again, I discovered I'd forgotten to take the kitchen garbage, which was the whole reason for going to the dump in the first place, that and stopping by the post office to get my mail. The other stuff could have waited, but the kitchen garbage was making its presence unpleasantly known.

So, I put the kitchen garbage in the truck and headed for the Cooper Landing transfer site, only nine miles away. Of course, I stopped along the way at a couple more pullouts and picked up the weekend's litter. 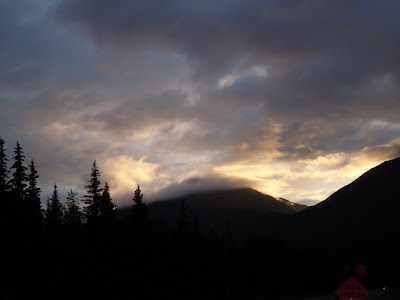 I was almost half way there when I remembered that the Cooper Landing Senior Citizens group closes the gates to the transfer site at 7 p.m. They have a bear problem over there. I stopped at another pullout, picked up litter, looked at the sky, and headed back to Tern Lake. 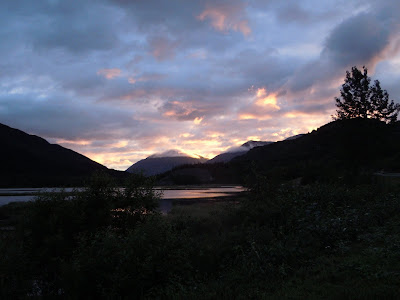 This was going to be special, so I stayed around the lake, just waiting. 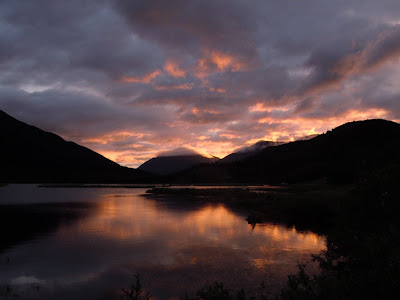 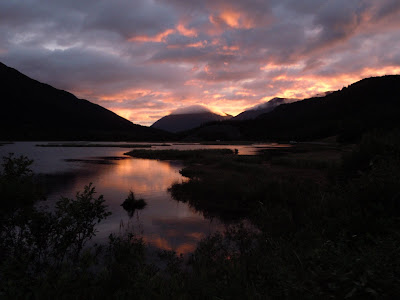 Yeah. Special. It really isn't as dark as it seems in these shots. They're backlit and I stopped down the white balance a notch or two so the camera would capture the true sky colors.

As I said, courtesy of a bag of forgotten trash. Had it not been for that, I would have spent the rest of the evening inside, writing a post for this blog. I'll have to do that tomorrow.
Posted by Gullible at 11:42 PM

Email ThisBlogThis!Share to TwitterShare to FacebookShare to Pinterest
Labels: sunset at Tern lake