Night Visitors after the Storm

A blizzard skittered through here a couple days ago. With each deep breath, the snow swept past my house sideways, smacking into windows and obliterating the view as effectively as Hunter-Douglas blinds.

Snowflakes assailed any trees in their paths, joining all their frigid pals in plastering the trunk and branches until the original form was obscured as if iced with butter cream frosting. 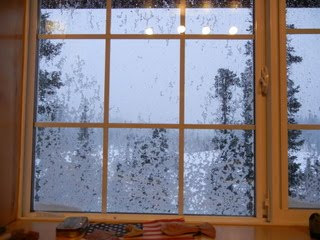 On the storm-battered side of the house.

Whenever the storm paused to take another breath, snow played on my back deck, a dizzying choreography of whirligigs and dervishes in mid-air. All day long the snow meant to fall in my neighbor’s yard pirouetted into mine, while my allotment traveled farther west to the neighbors' property.

I stayed inside that day, thankful that no chores required my presence outdoors. Long into the evening the storm blew, blotting out satellite TV reception. Internet speed rivaled rush hour traffic jams in Los Angeles or Moscow. I suspect everyone was inside that evening, surfing far away from home and bouncing off the parameters of the broadband width allowed to us.

The wind continued to batter my house after I went to bed late that night. Seeking light reading, I curled up with Dean Koontz’s “Breathless,” an imaginary tale of black-faced, black-handed creatures swaddled in shimmering white fur and with eyes of topaz. Their presence on earth inspired wonder and awe in man and beast alike, transforming all for the better.

As I read, I pictured the lemurs of Madagascar, the white-furred Deckens sifaka that I had seen in photographs in a recent issue of National Geographic. Found only in western Madagascar, their habitat in the shark-toothed limestone formations called tsingy, these sifaka also inspire awe. I wonder if Koontz had these creatures in mind when he wrote his novel, recalling my own reaction to them when I first saw their photos.

Sometime during the night the storm ran out of wind and contented itself with brief puffs and huffs before settling down.

I fully expected a craz 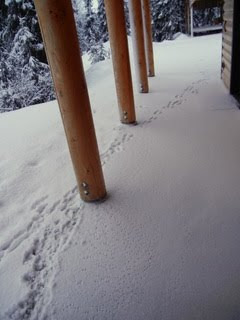 ed landscape in the morning, the snow sculpted into phantasmagoric shapes and contours. Instead, the tundra was soft and smooth, as if the snow had fallen peacefully.

On the sheltered, covered walkway leading to my front door, the storm had painted a thin layer of snow onto the concrete, laying a palette in white to record the passing my own nocturnal white-furred visitors. Not the long-tailed sifaka of Madagascar, but the tracks of long-eared, short-tailed snowshoe hares of Alaska that had traveled one direction and then the other, traced a trail in the new snow. 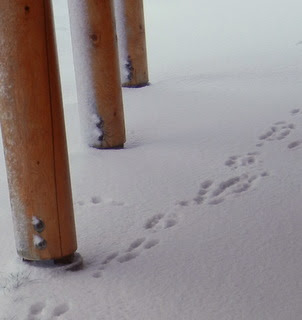 And off to the side, the wee spoor of tiny voles huddled against the wall, no doubt seeking protection from nocturnal predators with eyes of topaz that descend on silent wings.

The storm has passed, the snowplow come and gone. I’ve shoveled the walkway where the hares and voles had scampered. I’ve waded up to my knees in soft snow to fetch the Sunday paper from the ditch where it landed during the night.

And on the restored TV reception, the Seahawks won a game--just in time so I could watch the setting sun transform the landscape yet again. 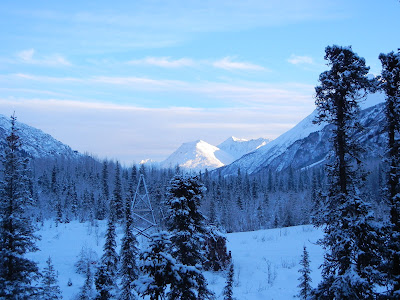 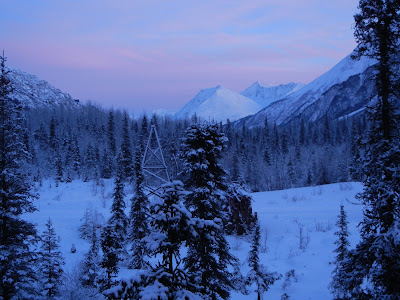 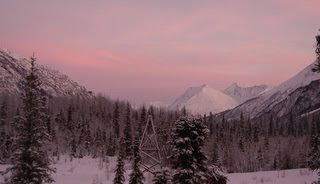