The View from the Back of the Bus, Part 2, The Dalai Lama

On a sidewalk in Lhasa, a few of our group are talking with a Tibetan whom I will call Alpha.  The expression on his face shows extreme dismay and tears have escaped his eyes.   He looks about anxiously, apparently afraid a spy for the Chinese communist government will hear him talking about the Dalai Lama.
He is an English-speaking man, one of few Tibetans who holds a job, and thus is subject to the Chinese government’s edicts. 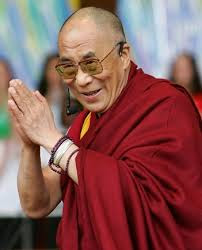 I learn why he is so distressed.  He has just been told that the 14th Dalai Lama, the 76-year-old spiritual and political leader of Tibet, is hospitalized for lung problems.  (This turns out not to be true).
“We never hear anything about him,” Alpha whispers.  He says that when the Chinese-chosen Panchen lama comes to Lhasa, everyone must go to the streets to cheer him and revere him and wave prayer flags.  They do not like this, nor do they like the Panchen lama, whom they consider a false lama.  But disobeying the government’s command would be to lose his job, and losing a job means never working again, except in the fields as a pauper.
The Panchen lama in the Yellow Hat sect of Tibetan Buddhism is the next highest lama after the current Dalai Lama, who has lived in exile in India since 1959.  He travels the world on behalf of Tibet.

It is the Panchen lama who directs the search for the child incarnation of the current Dalai lama, the child who will become the next Dalai Lama.
From Wikipedia:
“…the People's Republic of China asserts it is Gyancain Norbu, while the 14th Dalai Lama asserted it was Gedhun Choekyi Nyima on May 14, 1995. The latter vanished from public eye shortly after being named, aged six. Chinese authorities stated that Gedhun had been taken into protective custody from those that would spirit him into exile and is now safe.”
Gedhun's family also is missing.

I tell Alpha that I had heard no such news about the Dalai Lama.  When I get home, I say, I can e-mail him with news.  While I have a netbook with me in Tibet, there is strict censoring.  I am even unable to access my Google-based blog.
Alpha now shows fear and says all e-mail in China is censored and it would mean great trouble for him.  I can disguise it, I offer, perhaps reporting it as the health of my relative.  Again, he says no and walks away in great distress, obviously wanting to disassociate himself with free-speaking Americans.

As for the communist government of the People’s Republic of China, it says their chosen Panchen lama has embraced communism and sees its benefits for all China.

In the past few months, the Dalai Lama has surrendered his political role, saying he wanted to concentrate on his spiritual leadership.  Most recently, he says that before he dies (or reaches 90), he will choose his successor, an extreme departure from tradition.
Something is in the works and time will reveal how that plays out.

I just wish I could contact Alpha and tell him that his Dalai Lama is alive and well.
Posted by Gullible at 1:00 AM