Today was our first full day of activities at the Churchill Northern Studies Center and we spent the entire day out on the tundra in those enormous Tundra Buggies.  The name is capitalized because it's trademarked, built right here in Manitoba.

We saw a total of 18 bears today, and parked for several hours next to three that were active.  Well, two were very active, exhibiting the kind of feigned sparring that trains males for real sparring when mating season arrives.  The third bear could not be disturbed from its nap.

The internet connection is is very "iffy" and photos take a half hour or more for EACH one to upload.  So, I'm posting three good samples of what's Ive taken so far.


Tomorrow, we go on a helicopter overview of the area and a tour of Churchill itself.  The day after that, we're on the Tundra Buggy again.  Plus, each evening there is a lecture on various aspects of polar bears, climate change, and living with polar bears, etc.

Full days and evenings.  More to come, though it might not be much until after I get home the middle of next week. 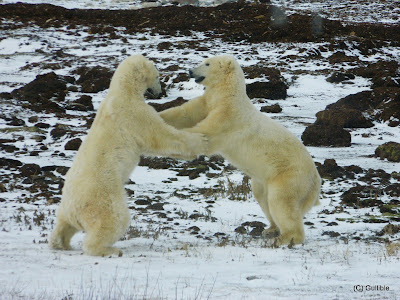 These two bears would spar, eat snow, take a nap, then spar again.
Posted by Gullible at 7:19 PM