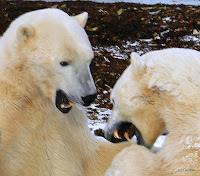 Early November on the frozen tundra near Churchill, Manitoba.  It’s been more than four months since the great white polar bears have had a decent meal.  Their metabolism has slowed as if they are hibernating, but there’s no long sleep for these bears.

They remain awake and searching for food while they are onshore.
They nibble occasionally on berries and grass in an attempt to quell their hunger, but what they really need is a huge ringed seal with plenty of blubber.

The problem is, they need Hudson Bay to freeze over so they can get on the ice and hunt those seals.  And Hudson Bay isn't cooperating.  Every year freeze-up comes later and later, and every summer the ice goes out sooner, driving the huge beasts onshore. 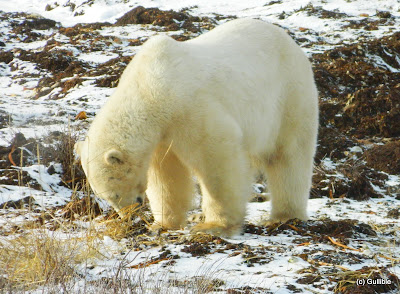 The sows with cubs have stayed inland, waiting for the boars to leave so they can  bring their cubs safely to the ice.  The boars will kill the cubs if the sows approach too soon.  One theory that seems to hold the most weight is that the boars kill the cubs so the sow will be in estrus by mating season.
A little bit of slush has formed in some of the quieter parts of the shoreline, but a persistent northerly wind roils the surface of the water and prevents more freezing.  Long naps help while away the time as they wait. 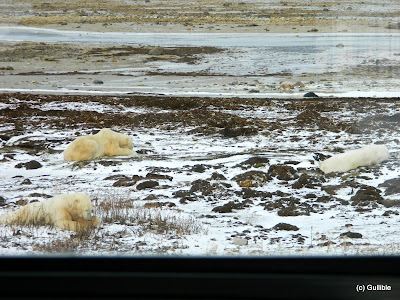 So do sparring matches with other males that have gathered along the Churchill coastline to wait for the ice. 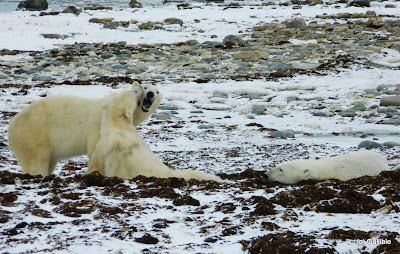 Even though the temperatures are hovering just below freezing, the air is much too warm for such exertion.  Yet, the younger males continue with these sporadic playful matches, while larger, older boars refuse to waste their energy in such trivial pursuits. Their huge bodies have become lean from lack of food and they must conserve what energy is left. 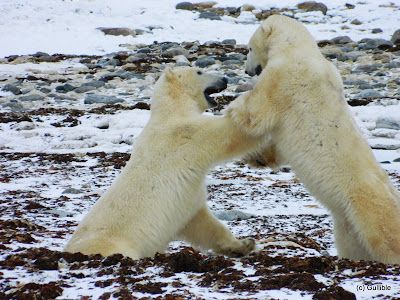 Scars on muzzles give proof that these sparring matches aren’t always fun and games.  In a few months, after they’re out on the ice and getting fat and healthy, it will be mating season and the sparring will be for real.  For now, it’s good training for the youngsters. 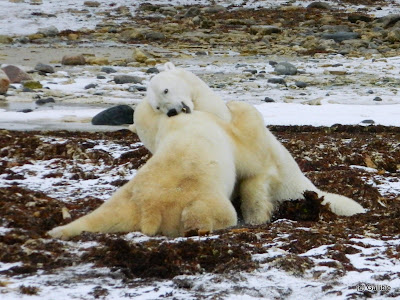 A little give and take, some rolling around, and it’s time for a break.  Maybe lap up a bit of snow to quench the thirst, then spread-eagle on the snow to cool off. 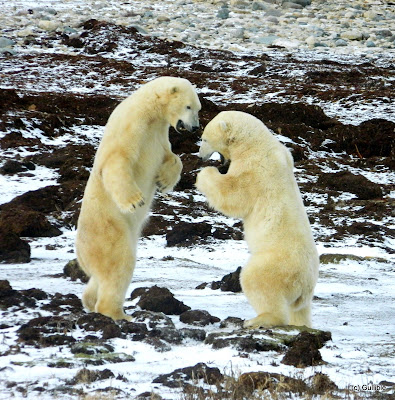 A short nap, and they’re at it again.
Not much to do when a hungry bear is waiting for the ice.