The Polar Bear Journals, Ch. 9, Wherefore art thou, Churchill? And why?

I first heard of Churchill, Manitoba, when friends talked about having gone there to see polar bears.  That was the extent of my knowledge.


So earlier this year when a mutual friend e-mailed to ask if I wanted to join her and others on a Road Scholar program to Churchill, I responded, "Absolutely!"   I still didn't know where Churchill was--just some vague idea that it was in the eastern part of Canada.  I guessed that only because I've been through most of western Canada and knew I hadn't been in the province of Manitoba.  I went online to find out where Churchill was located. 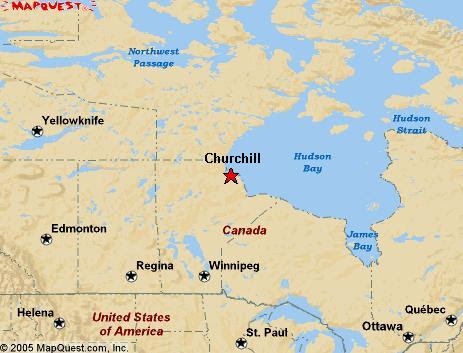 Okay, up there on Hudson Bay, central Canada, Central Time Zone, just below the Arctic circle.  That told me where; it didn't tell me why.

The great thing about Road Scholar (previously known as Elderhostel) guided tours is that they are educational.   Each of the five days we spent at the Churchill Northern Studies Centre included an evening lecture on various aspects of polar bears, Churchill and its vicinity, and the marine environment of Hudson Bay.

Our first full day in Churchill featured touring the tundra in the Tundra Buggy and watching 18 polar bears.  On our second day we went to town.  Literally.  We were bused 14 miles into the town of Churchill.
Once there, a 30 minute helicopter flight gave us the lay of the land.

This area had been inhabited by nomadic Arctic people for more than four thousand years, the Thule people from the west who evolved into the Inuit, and also the Dene.  The Chipewyan and Cree had lived there since before the arrival of Europeans in 1619, when a Danish expedition looking for the fabled Northwest Passage landed where Churchill would later be located.  Only 3 of the 64-man expedition survived the winter, and they returned to Denmark.

A century later, the Hudson’s Bay Company built a log fort a few miles up a river and named it Churchill River Fort after John Churchill, 1st Duke of Marlborough, who was an ancestor of Winston Churchill.  Hudson’s Bay Company engaged in the fur trade with the Chipeyan natives, with furs coming from as far away as the Rocky Mountains.


When the British and the French began fighting over the North American territory, a large stone fort called Prince of Wales Fort was built near the mouth of the Churchill River, begun in 1731 and finished in 1741.  Forty years later the fort was surrendered without a shot to the French by the heavily out-numbered British.  The French attempted to demolish the fort.


The fur trade suffered as a result and the local natives, who depended on trade goods from the fort, were negatively impacted and many starved.

With the success of agriculture in the Canadian plains, a rail link from Winnipeg to Churchill opened in 1929.  This eventually resulted in a large grain terminal being constructed in Churchill because it proved to be the shortest route to European markets, closer even than the St. Lawrence Seaway ports. 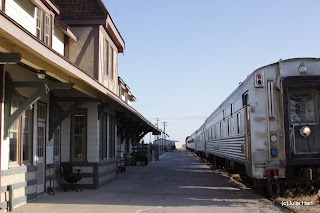 In the mid-1950s the Churchill Rocket Research Range was built 14 miles outside of town for joint Canadian-American atmospheric research.  It closed in 1984 after firing 3500 sounding rockets into the upper atmosphere.  Some of the rockets tested became part of the US space program.


Scientists from around the world went to the rocket site to study the Aurora Borealis (Northern Lights) as it is one of the top three places in the world to view the phenomena.  Churchill sits directly under the Auroral Oval and, weather permitting, the lights can be seen  300 days a year on average.

In 1941, during World War II, the US military built Fort Churchill a few miles out of town, and the people of Churchill were pulled into the modern world.

And all that was just part of the morning.