The shotguns weren't for "local color."  They were dead serious, or rather, hopefully not-dead serious.

We needed no further proof of that than the dry erase board posted on the wall just inside the main entrance to CNSC. 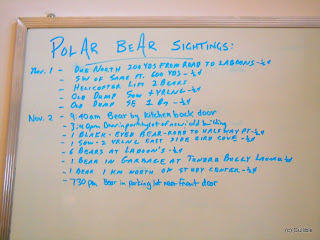 When we assembled in the atrium for our walk around the grounds of the Churchill Northern Studies Centre.  Mike, the XO of the Centre, was armed with a .12 gauge shotgun.  In his pocket were six shells--three cracker shells that are timed to explode with a loud bang at 200 feet, and three shells with slugs. 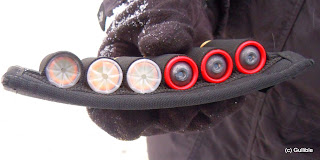 If the bear hasn't been scared away with the cracker shells or stopped with three slugs, forget it.  It's all over.  On second thought, there is an alternative.  Alaskan Sourdoughs recommend leaving the last shot to use on yourself.  Probably works just as well when a 1500 lb. white carnivore is on you as it does when a 1200 lb. brown bear is munching on your arm.


With the appropriate warning about not wandering astray, Mike led us outside.  I noticed his head swiveling from side to side as he exited, checking for bears.

The unusual terrain had caught my eye on the bus ride from the airport and Mike now explained that the Churchill area  is located at the juncture of three ecoregions:  the Arctic tundra on the north, the boreal forest on the south, and Hudson Bay on the east and north. 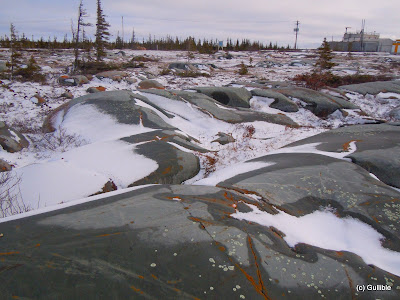 Glacier ice had once covered this area, he said, which accounted for the rounded smoothness and scratches on the boulders around us. 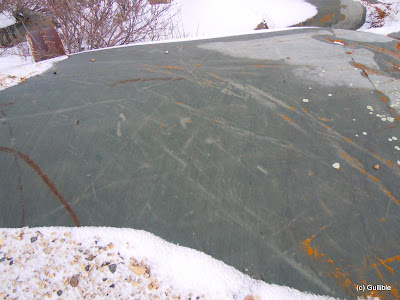 Underneath, the ground is locked in permafrost, thawing only a few feet down during the summer.  The scraggly Black Spruce were familiar to me, but not so the ice pruning--the lack of branches on one side of the tree caused by blowing snow from the almost constant northerly winds.


They make perfect Christmas trees, explained Mike, if you want to put one in a corner.  You have to cut two and tie them together if you want a whole tree.  The base of each tree was surrounded with bushy branches that were buried in snow during the winter and protected from ice pruning.


Mike explained some of the scientific research programs that were on-going at the center, pointing out marking posts and antennae that were part of various projects.


Some of us headed into the cafeteria for a hot beverage after our walk.  I had just finished my hot chocolate when Kathy rushed in and said there was a bear outside.  Julia and I led the stampede out of the cafeteria.

I reached the appropriate window in time to see a cracker shell explode and a white rump disappearing into the willows.  A staffer in a red Suburban had discouraged the bear from approaching closer.


I told Mike I was going to flatten the tires on the red Suburban.