The View, Part 6, Stranger in a Strange Land

We are talking about the staggering population of China, estimated at 1.4 billion.  One of our group, who had closely follower the Korean War, says something to me.  I hear only part of it, but what I do hear is chilling:
“…..we could take care of the North Koreans,” he says. “But then the Chinese came at us.  There was no end to them.  They just kept coming.  We couldn't stop them and they ran right over us...”
***

I've been in Tibet for five days.  It is the morning of the sixth as we board a bus that will take us to the airport.
I love these friendly, gentle people, their honest, spiritual ways, and their smiles that come from their souls.  I have been wanting to visit here since I was a small child, perhaps seven or eight years old.
I’ve also had it with the suffocating presence of armed Chinese soldiers everywhere.
Soon after I checked into my hotel here in Lhasa, I pointed my camera out the window to photograph the nearby mountains in the late afternoon sun.  Then I saw soldiers in fatigues down below, directly in line with my view.  During my entire stay, they performed drills and played basketball in a courtyard behind their barracks, outside my hotel room window.


They patrol the streets.  They are stationed at public parks, monuments, and bazaars.  They are posted at specific areas—four of them under a canopy, each one with its back toward the center, each one facing a different direction, each one armed with an AK-47.
I have to look carefully before I point my camera, making sure there is not a soldier in view because “the soldiers aren’t really there.”  Our guide cautions us several times about photographing the soldiers.  She says they will chase down the bus and confiscate the camera.  It has happened before to one of her groups.  Further, she says, she would suffer consequences.


One day I had pointed my camera out the window of the bus as we passed a monolithic memorial with beautiful mounds of colorful flowers beneath it.  At the last second, I noticed an armed soldier at its base.
I asked later what the monument was.
“It is a monument to the peaceful liberation of Tibet,” was the response.


Well, it wasn’t peaceful at all.  And, it wasn’t a liberation, it was an occupation, an enslavement.

Now, on this last day, an hour from the airport, our bus stops in the traffic lane and waits while one of our group dashes into a shop to retrieve a purchase.  I slide over to the sidewalk side of the back row in the bus.  Twenty feet to my right is one of those four-man armed stations.
AK-47s at the ready, the soldiers stand ramrod still in full uniform.  Only their eyes move and those eyes take in everything.
I’ve had it.  I raise my camera in full view of everyone outside. 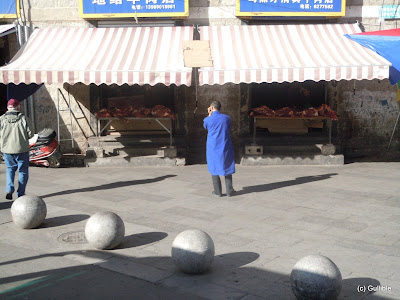 This is my best chance to photograph one of the open air meat markets where cuts of meat are on display, uncovered, unrefrigerated.  I suspect it is yak meat.

I move the camera a bit to the right, playing chicken with the soldiers, and photograph a rickshaw.  I take another picture.  I make no effort to conceal what I’m doing.  A man in civilian clothes watches me. 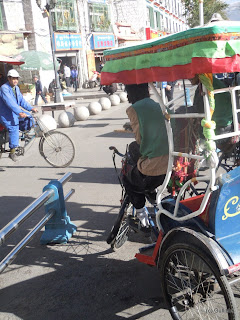 I am not taking pictures of the soldiers.  I am not violating the unwritten rules.  But I’ve had it with their suffocating, unwanted presence.   I am also aware that I have unintentionally photographed the soldiers that were guarding the Beijing to Lhasa railroad, and also a part of a military convoy appeared in one shot of the countryside.

I remind myself that I am not in the United States.   I don't want our guide to suffer any consequences for my foolish mini-rebellion.   I put down my camera. 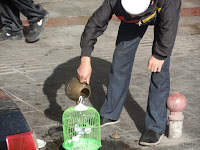 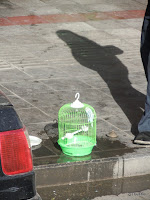 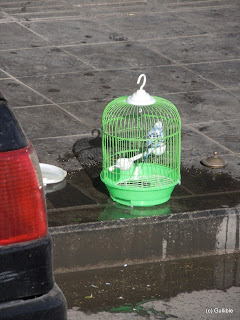