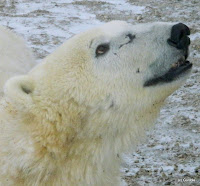 Rule Number One at the Churchill Northern Studies Centre:

If you hear a fire alarm, DO NOT RUN OUTSIDE!

Polar bears don't care how their dinner is--raw or well done, all the same to them, though they probably hate it when all the fat's been rendered out.

Assemble in the cafeteria, said Mike, or if that's too smoky, go to the opposite end of the building and stop in the enclosed (i.e., protected from bears) stairwell.  Wait for those .12 gauge shotguns to escort us from the burning building.

We had signed away our lives on multiple forms--to the Centre, the Tundra Buggy company, the helicopter outfit, and maybe to the dog sled company.  There were many and I've forgotten all of those I relieved of responsibility for my life and/or safety.


I signed every form put in front of me, signed with impunity, didn't read the fine print.  For all I know, I could have relieved Wapusk General Store of liability for overweight luggage should I purchase too many polar bear tee shirts.  Or the town council should I encounter a polar bear while walking down Kelsey Street, the main drag in Churchill.

I came here to see polar bears and if taking full responsibility for my life was needed, so be it.  (You think I'm exaggerating, don't you?  Being melodramatic?  Building up tension?  Making a better story?  You just wait.)

Early on the morning of our first full day in Churchill, we boarded a bus for a short ride to the Tundra Buggy company's site.   This was the day we would travel onto the tundra in search of the great white carnivores. These all-terrain vehicles are custom manufactured in Churchill by Frontiers North Adventures.   The name Tundra Buggy is patented, which I why I'm capitalizing it.


The Buggy is built with tires "measuring 5.5 feet high and 3.6 feet wide, mounted on 25 inch rims," according to an internet report on the Tundra Buggies.  They allow the four wheel drive machine to maneuver the rough trails made by the US Army, which used this area for cold weather training and artillery practice during the Cold War.   They also provide more height and security for riders.

At the rear of each Buggy is a viewing platform with chest high (on me) steel panels, not to prevent guests from falling off, but to prevent the bears from grabbing the guests.  Only when the Buggy is stopped are people allowed on the rear deck and the only food allowed there is you.  No peanut butter sandwiches or cookies and such allowed at any time, all in an effort to keep the bears from associating the Buggy with food.  (As if humans didn't give them their first clue.)


The interior of the Buggy is utilitarian, but perfect for its intended use.  Rows of two-abreast seating line the windows and a wide corridor down the center allows for freedom of movement when stopped.  For safety reasons, no walking about is permitted while the Buggy is in motion.  It was difficult enough to take photos when the Buggy was in motion, and I couldn't imagine trying to walk around.


Most of the time I sat with one foot braced against the stanchion that bolted the seat in front of me to the floor, and pushed my back against my own seat.  In this way, I could raise my short little self high enough to see out the windows around me.  I always let Julia have the window seat, despite her offers to switch.

I have learned that allowing my battered left shoulder freedom of movement prevents unnecessary discomfort.  My graciousness to Julia had nothing at all to do with the quick access to the viewing platform that sitting on the aisle allowed.  Nor did it have the least little bit to do with requesting the front seat in the up-coming helicopter ride.  Really.

An oil-burning heater warmed the interior, except for those moments when windows were opened to view the bears, or the door to the viewing platform was opened and closed constantly.  There was also a "honey bucket" toilet.  At lunch time, a custom-cut piece of plywood covered two rows of rear seats and made a platform for coffee, water and hot chocolate makings.  And maybe cookies. 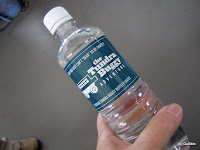 We had made our own lunches the night before at the Centre, packed them in brown bags on which we scribbled our names, and placed them in milk cartons to be stored in the Centre's refrigerators overnight.  If you didn't like your lunch, it was your own fault.  That self-responsibility thing again.


Of the 18 permits allowing vehicles into Wapusk National Park, 12 are owned by Frontiers North Adventures.   Two companies are allowed mobile camps, Frontiers North and the Great White Bear Tours company, whose vehicles we saw frequently on the tundra trails.  The camps have all the necessary facilities for housing and feeding guests who want to stay "with" the bears.  The guests never set foot on ground during their brief stays.  When the viewing season ends, the camps are towed off the tundra and back to their parking sites close to town.

Temperatures were in the freezing vicinity, but a persistent wind chill "froze" my Nikon P120 camera often, as well as made my fingers too cold to function well.  A light pair of glove liners solved that and allowed me to focus and push the shutter button. I also had a pocket-sized Nikon Coolpix camera that I could slip into my pants pocket to keep warm.

Most people were wearing warm jackets and hats, but fleece pants and a thin long-sleeved fleece pullover was fine for me, even when outside.  Knowing I would be in a cold climate, I intentionally put off a much-needed haircut until after I returned home, all in the interest of warmth. 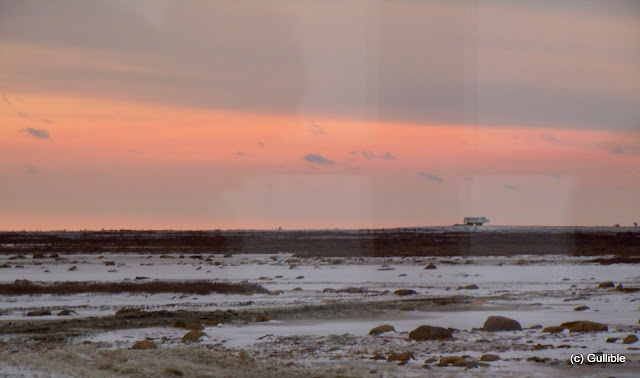