The Polar Bear Journals, Ch. 4, Getting There, Wherever "There" Is

For the first time in my life, I care about the weather in Churchill, a small town located in the Canadian province of Manitoba, north of Minnesota.  I went to Weather Underground to check on the temperature today and was pleased to see it was 1 degree F.

Further, the forecast for the next few days calls for temperatures hovering just above and below the zero mark.  Even better!  Also at WU's site was a satellite image, and that really made me happy.

That's land to the left of the vertical squiggly line and Hudson Bay to the right of it.  The horizontal line near the top marks the northern boundary of Manitoba.  Above that is the Territory of Nunavut.


The town of Churchill is situated on that peninsula that juts into Hudson Bay, between those two white images.  It's the white images that made me smile, because I think--and I'm pretty sure about this--they are ice.  Hudson Bay is finally freezing.  Sometime in these journals I'm going to tell you why I'm so interested in the freezing of Hudson Bay, but not just yet.

Until this month, the only thing I knew about Churchill was that tourists go there to see polar bears.  That's why I went, too, the first week in November.

To get to Churchill, I had to fly south to Seattle, southeast to Chicago, north to Winnepeg, and then farther north to Churchill.  It took me four travel days to wind up two degrees south of the same latitude as where I live, but three time zones east.

I met up with friends from California in Winnepeg, where we spent the night.  The next morning we boarded a small Calm Air prop jet for the leg to Churchill.


This was where things got interesting.

There were no assigned seats on this plane.  Rather than boarding first class first and then filling the plane from the back like most airliners, we were asked to fill the front rows first and work back to the tail so the plane didn't get over-balanced and tip up onto its tail.   All this had to do with where the carefully weighed luggage was stored and the weight and balance of the plane.  And there was no first class anyway. 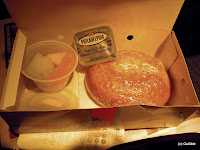 Once in the air, there was another surprise.  Free food.  I can't remember the last time I had a free meal on a domestic flight.  Yet, here came the sole flight attendant with beverages and a box containing a fruit cup and a bagel with cream cheese.


Once we landed in Churchill, we were met by a representative form the Churchill Northern Studies Centre and bussed to the center itself, which is about seven miles from the town.

The Centre is a research facility that not only hosts tourist groups, but also provides research support for scientists.  The lovely new building replaces the older facilities that had been in use for a long time.

Kathy, Donna, Julia, and I were assigned room 13, on the second floor at the far corner.  We settled in and had lunch in the cafeteria. 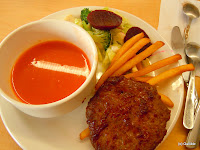 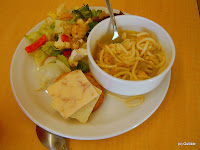 We were to meet downstairs for a brief walk outside, led by Mike Goodyear, the executive director of CNSC and our Road Scholar leader for the next few days. 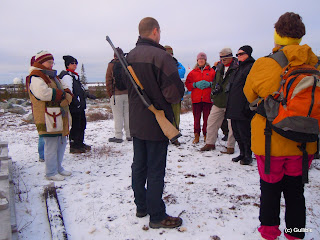 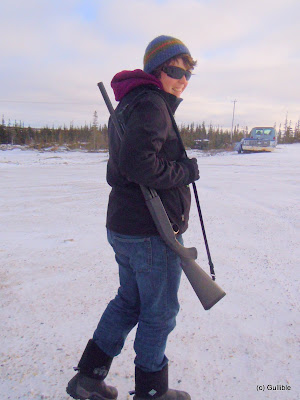 Welcome to the food chain, all you tourists.