The View from the Back of the Bus, Part 4, Tianamen Square 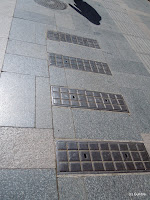 “There are two kinds of pedestrians,” says our guide,  “the same as in New York City--the quick and the dead.”
The traffic lights, she adds, are only a suggestion.  There is frequent horn-honking, also, I note.

Before we bolt across the boulevard, she points to metal plates in the concrete sidewalk.  These cover in-ground urinals for soldiers who must stand there for long periods.
With her expert guidance, we make it safely across several lanes of traffic and walk to a security station.  We left our bags on the tour bus and I carry only my camera, which is subjected to inspection.
And then I am on the other side of the canvas security shelter.  I am in Tianamen Square in Beijing, the site of many significant events in Chinese history. 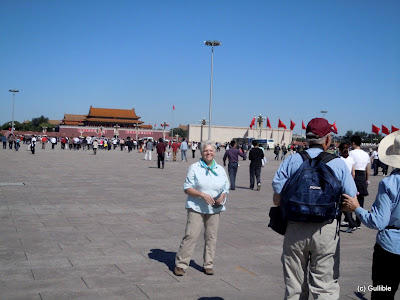 At the north end is the Tianamen Gate, originally built in 1417 but burned a few decades later, was rebuilt in 1651.  It was the formal entrance to the Forbidden City.  From the rostrum at this gate, Mao Zedong announced the formation of the People’s Republic of China in 1949.

On this bright and sunny day, briefly free of the smog that covers China, families are strolling around with children, flowers bloom, and grandparents pose for photos.  A long line has formed outside a building where, it is said, Mao’s body is on view. 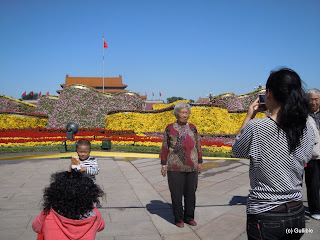 The square itself, the third largest in the world at 2887 feet by 1640 feet, or more than 108 acres, is a beautiful place, replete with monuments.  It is also a chilling site, patrolled by uniformed and plain-clothed security, who guard against protests or demonstrations of any kind. 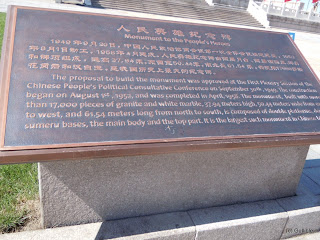 Perhaps the most notorious event is what has been called the Tianamen Square Massacre, but which apparently is a misnomer as much of the violence in the military crackdown occurred in the city streets, resulting in the death of hundreds (some estimates run as high as 7000) and the wounding of many, many thousands, though no official, believable number has ever been established.
I recall the image of a slender man in black trousers and a white shirt, standing in front of a column of military tanks, blocking their progress.  This did not occur in the square, but on a boulevard near by.

Today, it is forbidden in China to speak publicly of the events of 1989, as well as to make any comment against the government.
The image of Tank Man, whose fate is still secret, is forever identified by the outside world with Tianamen Square and “a government that is afraid of its people,” as John F. Kennedy remarked.
We are not afraid to entrust the American people with unpleasant facts, foreign ideas, alien philosophies, and competitive values. For a nation that is afraid to let its people judge the truth and falsehood in an open market is a nation that is afraid of its people.  - President John F. Kennedy, February 26, 1962
Posted by Gullible at 1:00 AM