The View from the Back of the Bus, Part 5, Little Emperors

They are called “little emperors” and because of them, the divorce rate in China has skyrocketed into the stratosphere.
They are the single male child, the once-favored male that will carry on the family line, born under China’s strict one-child policy.  Desired so much that—if you believe the reports—women were subjected to forced abortions and female babies were killed or  given away for adoption.  Enforced primarily on urban couples, it is estimated that 35 per cent of China’s population is subject to the law.
Family, and the family name, is a strong cultural tradition in China.  As a result, the boys are doted upon by parents and grandparents, who frequently take care of the children while both parents work.  They are showered with the best the parents can provide.

They are spoiled and when they grow up and marry, they remained spoiled.  They won’t do anything to help around the house, complain their wives.  They are lazy.
Today, the role of the female in China continues to change.  More and more couples are hoping for female children, and not only so they will have someone to care for them in their old age, though that is  prominent. 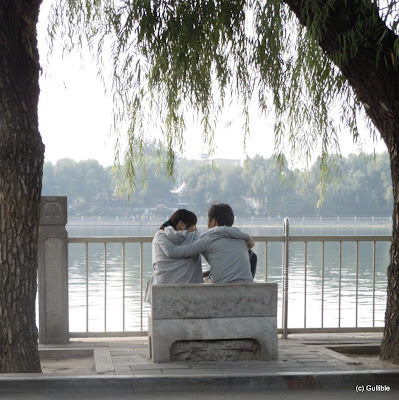 When a man marries, his parents must provide the couple with a condo or house.  The bride’s parents must supply only the appliances for the home, a substantial economic difference.
An ancient Chinese proverb says, "You are married until your hair turns white."  Chinese traditionally frowned on divorce.
And yet, more than 800,000 couples divorced during the first part of 2011.  An astonishing 2.46 million in 2009.

Where does the blame lie?  Certainly not only in the one-child law that creates “little emperors.”  Social mobility, the increased status of women, negative effects of economic boons can all be partly to blame.  So can the relaxed rules governing divorce.


The official explanation, of course, attribute it to Western values and "bourgeois ideas" of materialism and egotism.

Email ThisBlogThis!Share to TwitterShare to FacebookShare to Pinterest
Labels: China, divorce and marriage