This is where I spent the late morning and early afternoon Sunday. I had the pool all to myself, except for a couple guys who entered through one gate and exited through the other. I'm not sure what that was all about. A shortcut through the pool? 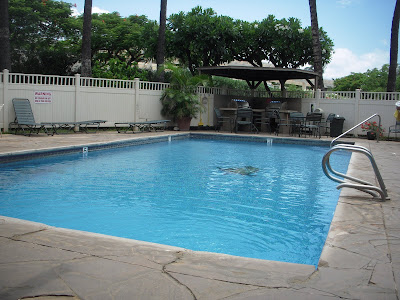 Anyway, after twice burning the bottoms of my tender feet on the hot deck around the pool, I went up to my friends' house in Kula. If I look uphill from my condo towards the volcano, I can see where they live. Distances deceive, but to me it looks like less than ten miles as the Hawaiian magpie flies. But, to get there I had to drive a long ways away in one direction, then go north a few miles, then turn back and drive the same distance as when I started. I got lost. Thank goodness for cell phones.

Then we got in the car and rode straight uphill along a rutted dirt road to Ranger Ted's place where the horses and mules were pastured. We were there to take four of them downhill to another pasture, in preparation for our jaunt on Wednesday into the Haleakala crater. Which, it turns out, isn't a crater or caldera after all. More about than later. And yes, it's still a volcano.

This sweetie below is a senior citizen mule. I'm told she's more than 50 years old. I thought I heard 54, but I was busy trying to keep Mauna Kea the white mule from knocking me over by rubbing his head on me, so I may have heard wrong. 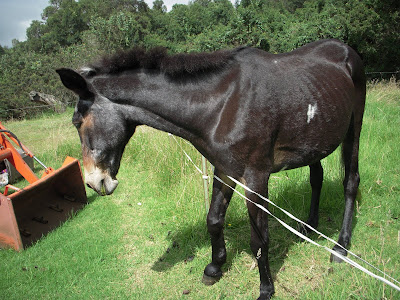 This is Bruce on the white horse. Holly, his eldest daughter, is running around geting everyone saddled and ready to go downhill. 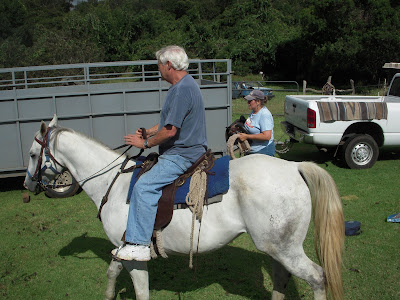 The sleeping beauty is Makena. The mayor rides him in parades. He is Holly's rescue horse, and has turned out to be magnificent, both in personality and form. This is the critter that will take me 3000 feet down into the crater. We were meeting for the first time today. I think he wasn't too impressed, so he went to sleep. 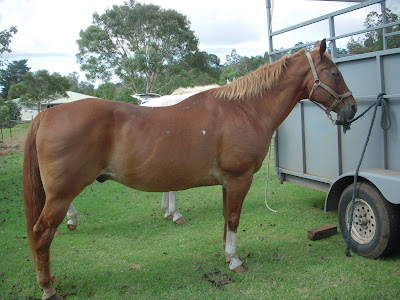 Had to ride along the road a ways to get to the lower pasture. That's Holly up ahead on the massive Mauna Kea. You can guess where I was in this shot. It reminds me of the tee shirt in Alaska that reads, "If you aren't the lead dog, the view never changes." 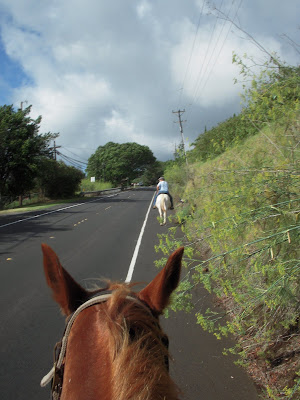 Nonetheless, we got the horses....no, the horses got us to the pasture with no mishaps. When we arrived, I discovered that despite his falling asleep earlier, Makena and I had bonded, Hawaiian style: My jeans were wet with sweat--both mine and his--and I was stuck to the saddle and the stirrups.

So, that's enough for tonight. Hawaii, as you might expect, has beautiful sunsets. Here's one I saw from my lanai last evening. 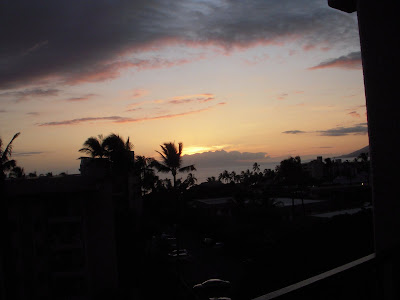