Waiting for us when we reached the Paliku cabin were two horses and two young women. We saw the horses first, and when they spotted others of their ilk coming down the trail, they ran across the pasture and came up to the fence to greet us. They had been injured previously, and left to heal and rest up for a week in the green grass of the Paliku pasture. Tough life for a horse, resting up in the equine version of Eden.

Resting on the lawn in front of the cabin were Danielle and Whitney, sisters who had hiked in earlier that day. They had the cabin open and aired out for us.

Danielle is the elder sister, and like her sister was born on Maui. He is a graduate of Oregon State University, where she studied animal science, and fish and wildlife science. Currently she is employed by Americorps, and works with the National Park Service in Haleakala crater through that agency. 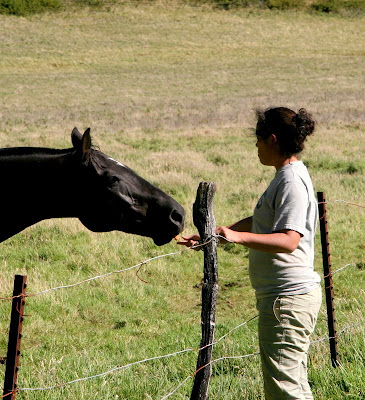 Danielle and Too Shy.

Most of her work involves endangered species management. She participates in periodic counts of the endangered Hawai’ian goose called the Nene (NAY-nay). She also monitors a series of traps set in the park to catch rats, feral cats, and mongoose, which are the predators most responsible for current loses of the Nene and other rare birds in the crater. 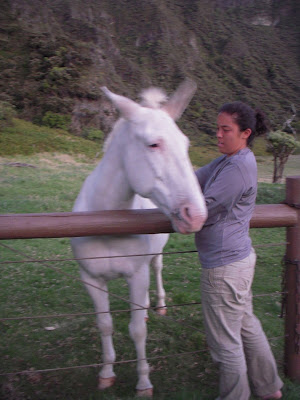 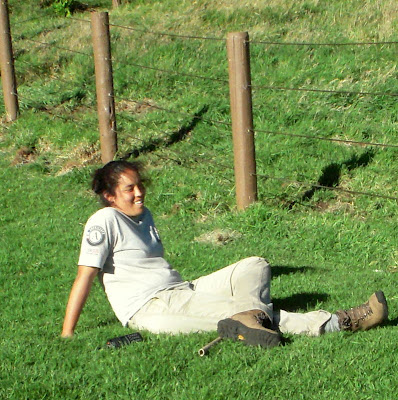 To keep things interesting in the family, Whitney opted to attend the University of Oregon. She is in her senior year, in a clinical psychology program. She hopes to work as a psychologist in a prison, preferably here in the islands after graduate school. 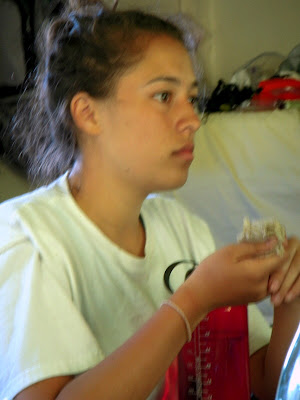 Currently she works in a home for mentally ill adults, gaining practical experience in her chosen field of study. Whitney came into the crater as a volunteer to assist her sister and help our crew. 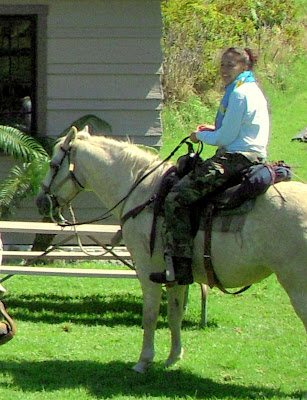 When offered a piece of reindeer meat Polish sausage that I had brought from Alaska, she refused to even try it, despite my assurances that it was not a weird food. Danielle claimed they were picky eaters, but the two of them turned right around and began eating raw fish mixed with something prickly that looked like smashed porcupine. Picky eaters, indeed. I wouldn’t have put that stuff in MY mouth, that stuff they called poki. Looked more like pukey to me. 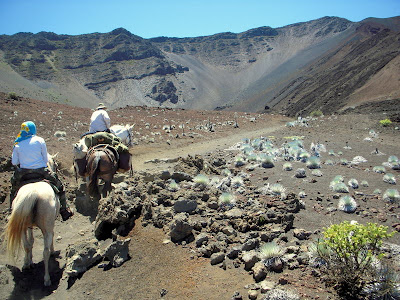 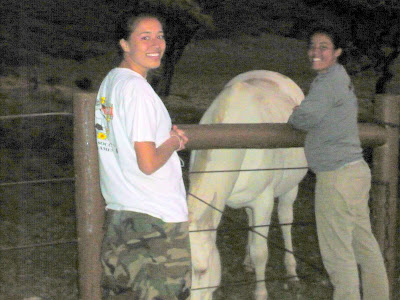 Whitney and Danielle with MaunaKea. 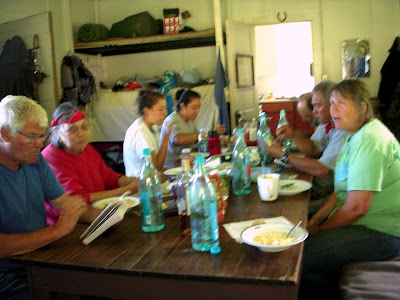 We now had ten horses in the pasture. I think the best way to introduce them is simply through photos. 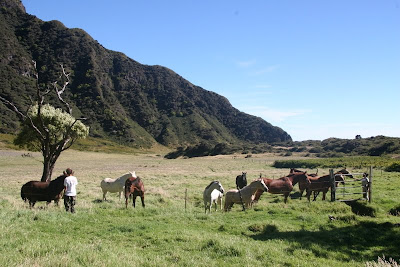 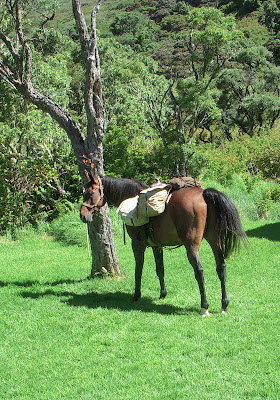 This is Romeo. He is the Alpha male of this group. He is tied off by himself because he was trying to bite all the other horses. None of the others horses will follow him. He is a leader sans followers. 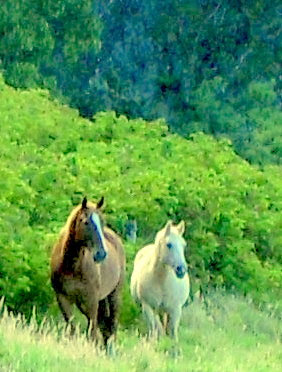 That beauty on the left is Makane (mah-KAH-nay). He thinks he’s an Alpha male, too, and he just might be. The others follow him. This is the horse I rode.

At his side is Kula (COO-lah), the sweet little white pony. She was a pack animal going in, and after we reached the last few miles of the trail, followed along without a lead rope. Here’s a close-up of Kula’s eye. 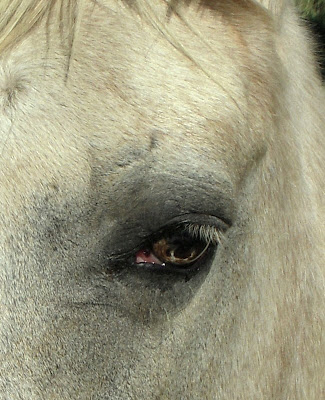 Look close. She appears to have an iris and pupil on the bottom of her eye, but it’s only weird coloration. 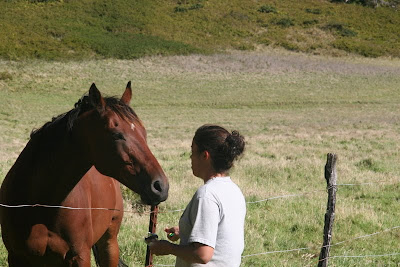 This handsome lad is Beaujolais, or Beau, for short. That’s Danielle giving him a granola bar. 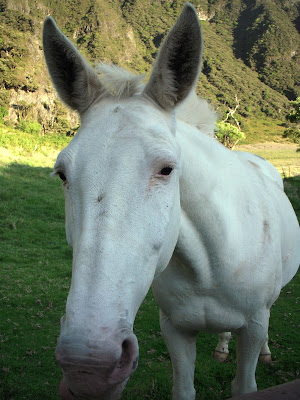 Next is the huge mule Mauna Kea (MAH-nah kay-ah), who shares the name of the tallest mountain on the Big Island. This is one of the gentlest animals I’ve ever seen. 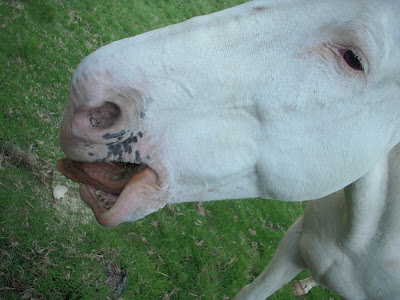 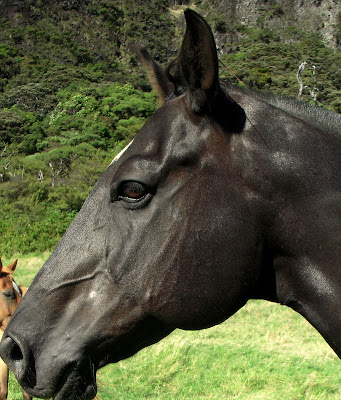 This gorgeous horse, Too Shy, can take your breath away. Watching him run through the pasture is awesome. 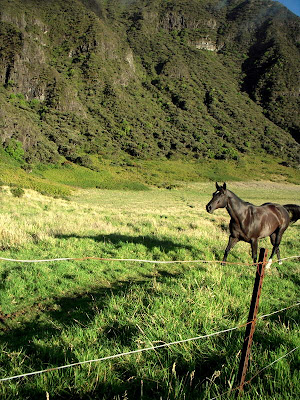 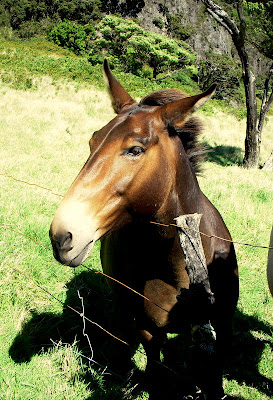 This is Kepa (KEH-pah), the astonishingly beautiful mule. He was the pack animal going in and out, and did his job without complaint. He’s a young animal, and is coming along great in his training. Not too many years ago, Kepa was afraid of everything. Now he is calm and friendly. 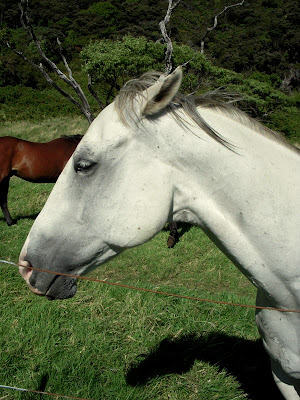 Next up is Pili (PEE-lee), a stunning gray. This is Andy’s horse, and was ridden by Bruce. Pili saw a lot of horse teeth when he got too close to another horse on the trail. 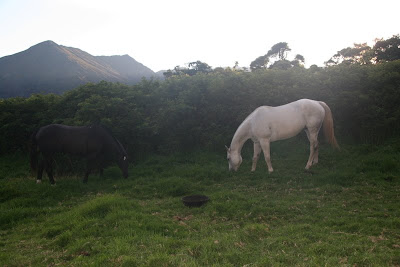 This is another shot of Pili in the light of the setting sun. 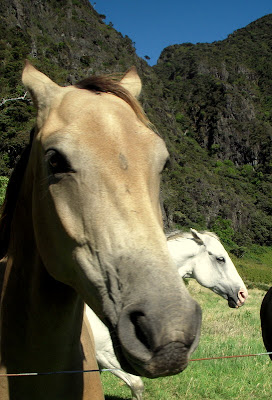 This is Roo, short for Kangaroo, a nice buckskin. He is one of the two horses that spent a week here, healing up from cuts on a leg. Roo was camera shy. 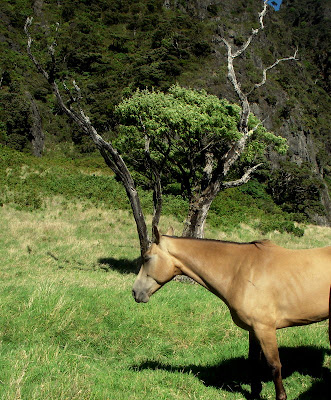 Another shot of Roo. 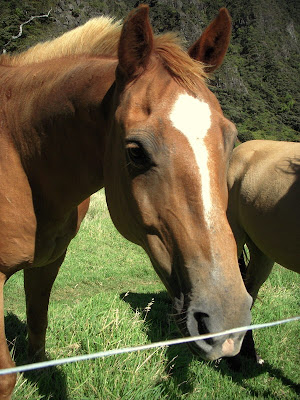 This is the second horse that had a week’s vacation at Paliku. Its was dubbed “The Kaupo Horse” because its real name was too complicated. Ranger Ted took it out the steep and rocky Kaupo Gap for its owners, while the rest of us went out the long way.

Here are some shots of the gang, just because I like the pictures: 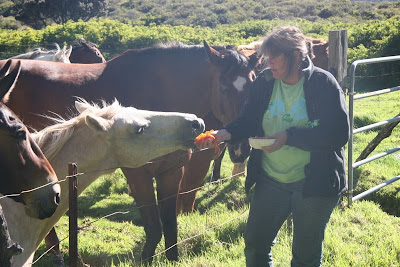 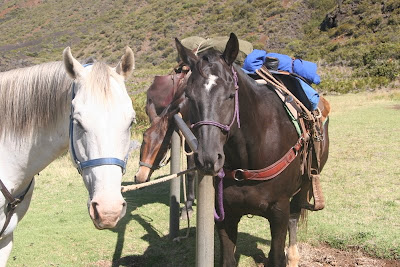 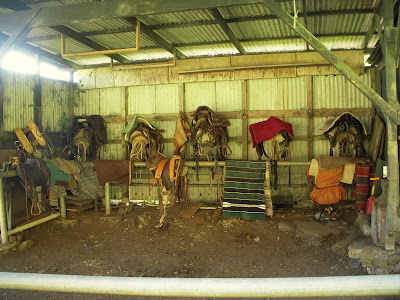 The tack barn at Paliku. By the way, no animals except horses are allowed in Haleakala National Park. You can't go hiking there with your dog, so leave it at home. The exception for horses is based on the fact that they have been a presence in the crater since the 1850s. Horses going into to park are supposed to be fed a sterlized feed, to avoid bringing in seeds of invasive plants.