Friends in High Places, Part One


Where would be without friends? New friends, old friends, two-legged or four-legged, makes no difference. Without friends I would not have spent four days in a volcanic crater seeing jaw-dropping scenery up close, working my tail off, and eating like an ali’i (ah-LEE-ee), the royalty of ancient Hawai’i.


I will introduce you to the cast of characters, or the usual suspects, whichever term you prefer. Add to that, one unusual character—one out-of-her-element Alaskan. 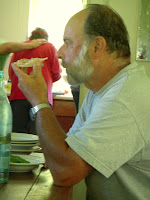 Haleakala, inside and out, is home to Ranger Ted. He lives with his wife Claire in an old wooden cabin his grandfather built, high up the outer slopes of Haleakala. The cabin has no water or electricity., but Ranger Ted loves it. Horses and mules graze in the fenced pasture outdoors. Eleele (El-ee-El-ee, meaning black) the mule, some 50 plus years old, spends her retirement here, and she is flourishing. 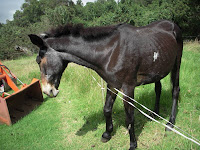 Eleele the retired mule has found a retirement home at Ted's.

Haleakala has hosted three generations of Ted’s family, the great-grandfather who worked on construction of the only road to the crater’s peak, the father who helped build a ranger cabin deep in the crater itself and then worked as a park ranger, and Ted himself, a ranger for the past 26 years. There is an almost visceral connection between Ted and the land, and when he speaks of Haleakala, his voice softens and changes with a reverential awe, and it flows with the melodic lilt of the Hawai’ian language.

Ranger Ted and the chopper that brought the genrator and chain saw.

He knows every part of this crater that is not really a crater, but a gigantic basin created by various eruptions, lava flows, and erosion that erased the dividing land between two valleys. He knows every species—mammal, avian, and botanical--that lives in the crater. 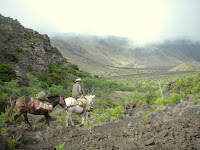 Ranger Ted in the crater.

He is a no-nonsense man when it comes to work, and he works long, hot, hard days of demanding physical labor, all to protect the magnificent Haleakala National Park.

Yeah, well, okay. So, all work and no play would make Ranger Ted a dull boy. 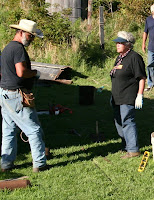 The very patient Ranger Ted trying to explain to Gullible what she's supposed to be doing. 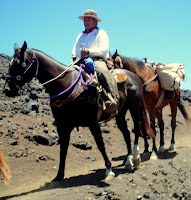 Then there is Andy, a wise old man in a young man’s body. 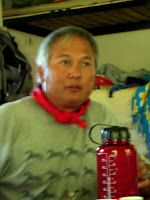 How to describe Andy? Handsome, polite, talented, and knowledgeable are a good start, but not a total. Andy is of mostly Chinese heritage, those Chinese laborers who came to work the sugar cane fields in the 1800s. Though a small part of Andy’s ethnic background is ancient, original Hawai’ian, it is this part that is the most detectable in Andy. 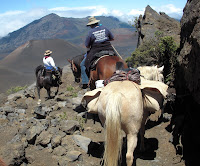 Andy in white shirt on the beautiful Too Shy, with Holly leading Kula, the pack pony.

His mother decided she wanted to raise her son in the old style, and during his elementary school years he was sent to various islands to live with and be taught in the old ways by relatives. He is an entire set of encyclopedias when it comes to Hawai’ian legends and lore. 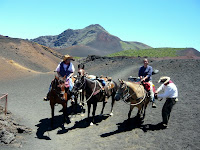 Andy adjusting the stirrups for Danielle.

Born in Honolulu, Andy returned there to attend high school—the same high school attended by President Barack Obama, though Andy was there before the president. After graduating high school, Andy went to Stanford, and then on to MIT (Massachusetts Intitute of Technology) and came home to his islands with a master’s degree in chemical engineering. He has applied his education in several jobs, from running sugar mills to his current job with Hawaiian Electric on the Big Island, even working for a time as a ranch hand where he tells us he earned his PHD—in Post Hole Digging. 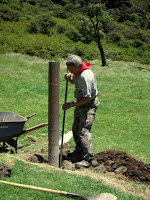 The PhD of new fencesisplaying his vast experience.

In the evenings, after supper while a tired crew relaxed on their bunkbeds, Andy pulled his ukulele from its black case and sang the songs of his country, those soft, lilting melodies that tell stories of the land and its peoples. 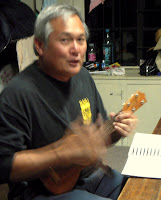 He is also a darn fine cook. 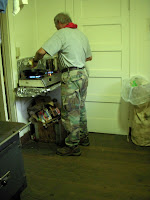 Andy cooking on the propane cooktop at Paliku cabin.

Ranger Ted in the lead, followed by Andy in the white shirt, Holly leading the pack pony, and Betsey last.