Has Windex Broken My Heart?

I didn’t intend to shampoo the carpet at midnight the other night. The thought had never crossed my mind.

Instead, my self-assigned chore for the day was cleaning the inside of the windows. Which reminds me of something I’ve been meaning to tell you about: I think Windex has broken my heart. I’m not real sure yet. I’m giving Windex one more chance, just to be certain. If I’m right, Windex is going to be subjected to the wrath of a woman scorned.

Scorned. I supposed that’s the right word. What other word would you use when you’re promised the sun, moon, and stars and all you get is a lump of coal? Or, say some knight in shining armor promises he will make your dreams come true, and you wind up in a living nightmare?

It all started one evening when I was watching television and a Windex commercial came on. I usually watch them because, having lived with a couple magpies in days of yore, I am amused by how spot on the copywriter got their personalities. 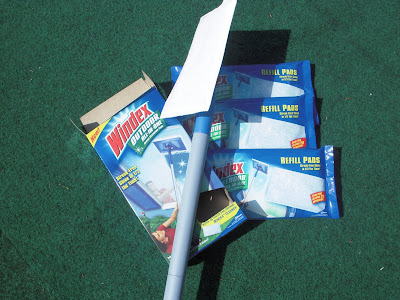 This ad was different, though. “Rinse, wash, rinse,” it promised. That’s all you need do to have shiny sparkling clean windows. Yeah, I’ll bet, I thought, remembering Windex Outdoors, which was a product that you hooked a garden hose to, sprayed your windows, turned the knob to rinse, and voila! No muss, no fuss. Except for the blue spots all over the panes for the lower twelve inches. 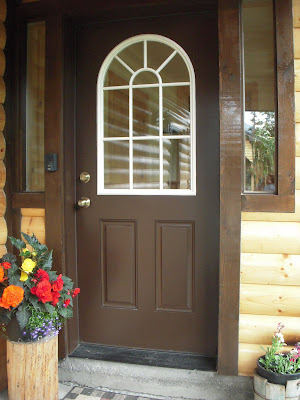 My windows are in vinyl frames and the manufacturer warns to not use products with ammonia or vinegar. Commercial products for use with a squeegee are all I’ve found to use.

Then a few days later, I saw the same commercial, and I was sucked in. This thing of my dreams, this miracle product, this wonder of wonders that would mean no more standing on the “DO not sit or stand” step of the ten foot stepladder in order to reach the top of the 21 foot high windows with the squeegee? Oh, how I yearned for such a savior. The next time I was in , I tried four different stores before I finally found new Windex product. I paid $16.99 for the wand and one cleaning pad, and $4.99 each for three packages of two pads. 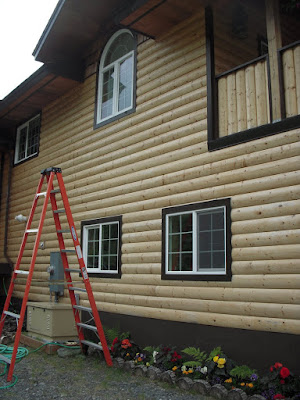 The next day, anxious to try it, I cleaned the outsides of all 27 windows in this house. Spray the window with a hose, wash the window with the special cleaning pad, then rinse off. Someone with a keen sense of humor added to the instructions: “Not recommended for inside windows.” I was thrilled at how easily I accomplished the whole chore, and in less than an hour. I found enough extension poles that I could stand on the ground or on the deck and reach the second story windows. Bliss. Pure bliss.

A few days went by before I noticed a blue film on the kitchen window. Then, I saw water spots in the blue film. Okay, some were on the inside because I hadn’t gotten around to the insides yet, but a lot of them were on the outside. The weather turned nasty and rain lashed at the windows for days. 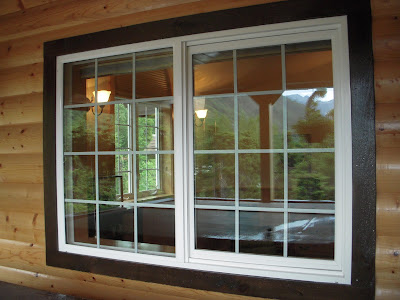 When things finally dried off, there was lots of blue film and even more wretched water spots. Maybe I hadn’t rinsed enough, I thought. So, the other day I did them all over again. Then I went down to the garage laundry room and filled a bucket with hot water and window cleaning compound, and got the scrubbing tool and squeegee ready to do the insides.

I opened the half door into the crawl space and carried out the ten foot ladder—the one that is never loaned out because that’s the one that stands on the off-white Berber living room carpet when I clean those windows. I set the ladder down in the garage and saw something I probably should put under the house as long as I had the door open.

Six hours and two stories written and posted online later, I finished organizing the confused mess in the crawl space and had the garage 98 per cent clean. I’d somehow managed to skip a meal, but I had more things left to do, so I grabbed an Atkin’s shake from the fridge and started back to the garage. That’s when I discovered the Atkin’s box was already open. That’s when chocolate fudge shake twirled around me in a four foot diameter circle on the off-white Berber carpet. 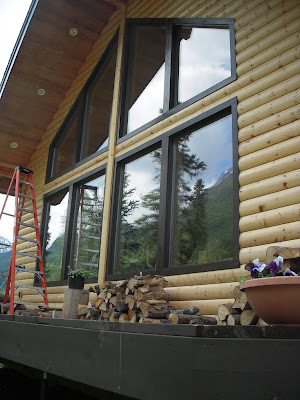 I went back to the garage to get the carpet shampooer, then paused to finish up one little thing. That’s when the muse struck and I raced upstairs to the loft to write a tribute to a fellow writer. That took a while, but I got it done just before midnight and went downstairs to cover Pablo’s cage for the night. At the bottom of the stairs, on the almost-white carpet, were a series of brown spots I’d somehow managed to forget about in the thrill of writing.

That’s why I was shampooing the carpet at midnight.

Oh, and the pail with the water and window cleaning stuff in it is still in the laundry sink. And my freshly-cleaned outside windows? I think I see a blue film forming on them.

PS: All of this reminds me of one of the only two jokes I've ever been able to remember both parts of--both the set ups and the punch lines:

Do you know what happened to the lady who didn't know the difference between putty and Vaseline?

All her windows fell out.