Just a quick note to let you know I’m out of the crater--safe and somewhat sound. “Sound” being relative, of course, but I’ll tell you about that later.

As it turned out, I needn’t have worried about Pele, the fiery goddess of volcanoes who throws fits akin to PMS tantrums like you’ve never seen. Only, she doesn’t throw dishes or cuss out the poor dog or OD on chocolate until she's sick. According to a pamphlet I picked up down here in Maui (to me, Maui is down, as in south of Alaska; to the rest of you, I guess the direction is over, or whatevah, as they say here in the islands.), Pele travels abo

ut looking for a good place


to make fires, and wherever she pokes her digging stick into the ground, a volcano is born. I read it in a hiker’s brochure published by the Hawai’i Natural History Association and the Hawai’i National Park, and they wouldn’t fib, now would they?

Ironically, or not, the legends of Pele’s journey correspond with the chronological age of the islands. To quote from the Hiking in Haleakula pamphlet: “She first landed at the western end of the island chain, but as each successive attempt to establish a home failed, she moved on from Kaua’i (6 million years old), to O’ahu (3 million years old), then Maui (1 million years old), and finally to Hawai’i (750,000 million) years old. Right now she lives on Hawai’i, which is also called the Big Island to distinguish it from the State of Hawai’i, where she punctured the earth’s crust and caused the eruptions of Mauna Loa and Kilauea, the latter of which has been spewing fire and brimstone for about thirty years.

The island of Hawai’i gains new ground every time lava sloughs down the mountainside and spills into the ocean, which is fairly constant. The island realtors suffered a little set-back a few years ago when some acres of prime ocean-front new lava-land broke off and fell into the ocean. I reckon Pele isn’t in charge of building foundations for this new land, only supplying the building material. 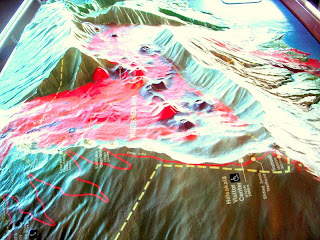 We went from the nearest point at bottom right to the farthest point top center in the crater, up against the steep wall. 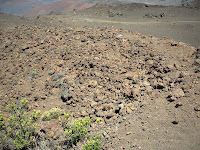 Did you expect the inside of the crater to be this yucky brown color?

Eruptions of volcanoes, including Kilauea, have burned down whole subdivisions and covered roads. I guess if you’re a goddess, arson isn’t a crime. Besides, considering her temperament and powers, who’d want to prosecute Pele? No telling what she’d do with that digging stick if she were indicted. 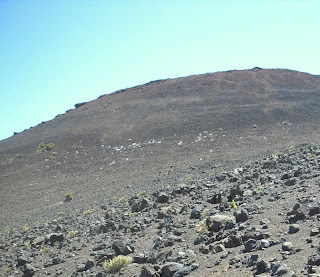 Or, maybe you thought it would be all black lava?

You have to wonder, though, what will happen to the earth when Pele has melted all the earth’s internal rock for building new volcanoes. Will it implode, just collapse because it hasn’t any stuffing left?

The color swatches I inserted here and there? I'm not asking for help with my interior decorating.