The first leg of our road trip was the hundred miles from our home near Moose Pass into Anchorage. I had diligently washed my pretty little burgundy and silver Dodge Dakota pickup the evening before, but rain sprinkles and the construction area made that a wasted effort. Once in Anchorage, I found out my new eyeglasses weren't yet because the frames were on back-order. Now, who would have guessed that frames bearing a suspicious similarity to The Sarah's would be so popular?

So, we drove to the AWAIC shelter--which means, I think, Alaska Women's Aid in Crisis or something such-and dropped off fifteen bags of clothing. What they can't use, the Big Brothers and Big Sisters take. This is a result of my friend Patti telling me the shelter had put out a public call for clothing. It came at the same time I was feeling the burden of possessions. Notably, I was thinking the gazillion tee shirts I've collected during my travels probably would never be worn because I'm trying to raise my public persona a half-step above jeans and tee shirts with prints on the front. That translates to jeans and tee shirts with no printing are preferable.

Then we hit Costco for chicken salad, a rotisserie chicken, and gasoline. I scratched two errands off the list, opting to leave them for my return. But the most important thing I did was to visit my cell phone provider and exchange my cute little red Motorola Krazr that won't hold a charge more than 21 hours for another cute little red Krazr that hopefully will hold a change more than 21 hours.

Multiple errands later, Pablo and I finally escaped the clutches of Anchorage and headed north in the direction of Fairbanks Thursday evening. Pablo’s travel cage was seat-belted beside me in the passenger’s seat, and he chortled and chuckled with excitement, which was a lot more fun to listen to than the whistling rut he was stuck in during the drive into Anchorage from Moose Pass. Pablo, obviously, can't purse his lips and whistle because he doesn't have any lips. He has a hard beak made of karatin, so his whistle is actually spoken. And loud. Very loud. 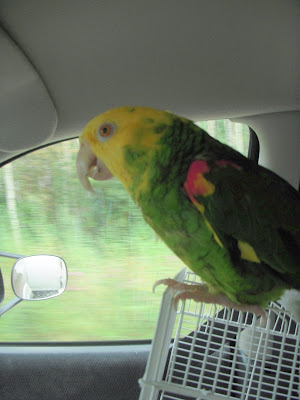 Once we passed Wasilla (home of The Sarah) and then Talkeetna, (home of the Moose Dropping festival), the traffic diminished substantially, so I let Pablo sit on top of his cage, which delighted him even more. 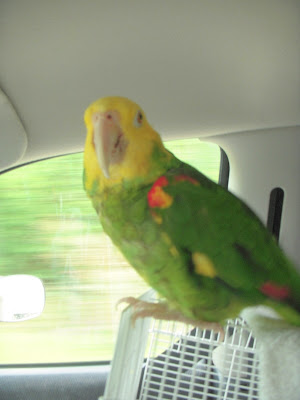 A hundred and thirty-four miles out of Anchorage, I spotted a great place to spend the night, and pulled in. Called Denali Viewpoint South, this wayside had numerous paved parking places for all sizes of vehicles and RVs, nicely landscaped grounds, restrooms, and an interpretive area with telescopes for viewing Mt. McKinley, or Denali, as we in Alaska prefer to call it. The Great One had pulled a fluffy cloud blanket around her this evening, but her sister mountains were visible in the late evening light. 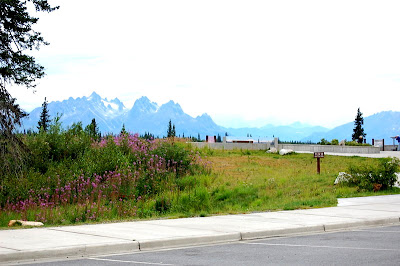 Denali is so massive, she makes her own weather. At 20,320 feet, she is the tallest peak in North America, almost nine thousand feet less than Mt. Everest. But, here's the catch: Everest rises from the Tibetan Plateau, which is at 17,000 feet above seea level, and Denali rises from the surrounding tundra at 2000 feet above sea level. That means Everest has 12,000 ft. of mountain above the surrounding terrain, while Denali has 18,000 feet.


Denali is known for cold temperatures (75 degrees below zero), winds in excess of 100 mph, and wind chill factors (118 degrees below). Climbers have been both frozen to death and blown off the mountain. Five glaciers cling to her flanks.


She was formed, according to Wikipedia, by something that sounded awfully familiar to me: the subduction of the Pacific plate by the North American plate, which is what caused the Great Alaska Earthquake of 1964. What all that subduction stuff means is that these huge tectonic plates float around on the surface of the earth and play King of the Hill. When one objects, the other one jumps on top of it and forces it underneath. Ewww. Big trouble in crust-ville. Rocking' and rollin' and shakin' and jumpin'.


There's been a long-lasting fuss about the mountain's name, with most Alaskans preferring its traditional Athabaskan name, Denali. However, some dude in Ohio wants the name McKinley retained, just because President McKinley was from Ohio, even though he never set foot in Alaska. And the fuss goes on.


There have been a number of remarkable climbing adventures on Denali, which you can find online. But, in my opinion, the greatest one of all was the first ascent by a dog team, a 1979 feat that involved Joe Redington, Sr., (father of the Iditarod race), Susan Butcher(champion Iditarod musher), Ray Genet (renowned climber and Denali guide who died on Everest), Brian Okonek, and Robert Stapleton. 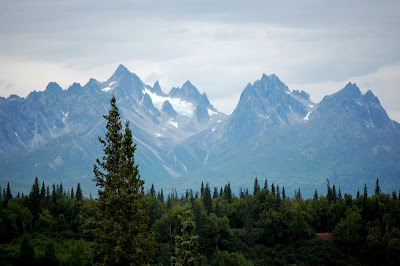 Denali, were she to show herself, would be to the far right of these mountains, which are in the foreground of Mt. Foraker and Mt. Hunter, both of which are obscured by clouds.

Thundering rain pelted the roof of the camper during the night, and I thought Pablo was going to freak out for a while. Then, it softened and lulled us to sleep.

The next morning, Denali was even more bashful, so we headed north again. We were in caribou country now, as evidenced by this road warning sign. 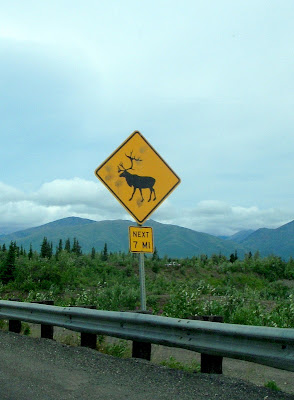 Eventually, near mile 200 of the highway, we reached the Chevron station at Cantwell, the perfect place to fill the tank for the rest of the journey. Services are far apart along this highway once you pass the areas of dense population. And look what I found in the parking lot of the gas station. 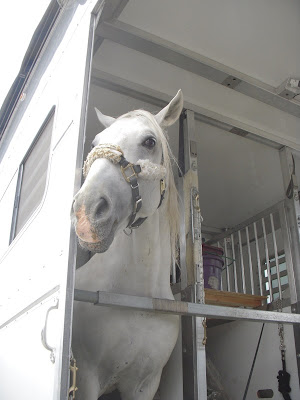 No, it isn't the Lone Ranger's horse. It's a Lipizaner, the same breed as the famous horses of the Spanish Riding School of Vienna, which have quite a history behind them. They had just completed several shows in Anchorage and were on their way to Fairbanks

Here are some of his buds, just chillin', gawking at the little tourists who crowd around their RV and gawk at them. 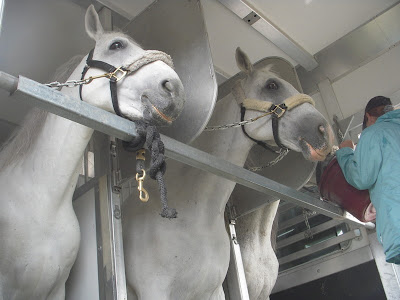 Before I left the station, I noticed these spruce trees at the front of the lot. Look closely. Click on the photo if you don’t see why I took this picture. Talk about symbiosis. 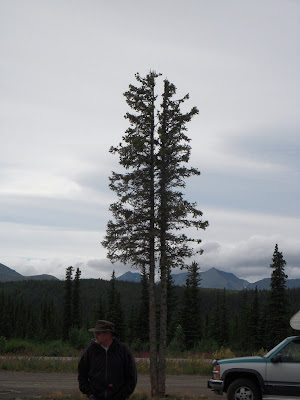 The trunks of these spruce touch at the butt, and neither has grown branches on the side where the other tree grows. Together, they form a nice tree, and there's a metaphor in there somewhere if I had the energy to look. 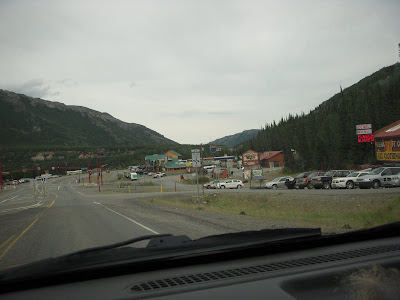 Denali's unfortunate commercial zone. It's located outside of and to the north of the actual Park entrance. Both sides of the highway are jammed with hotels, gift and clothing shops, and excursion stores. Kind of looks like the main drag of Wasilla. Serves a purpose, to be sure, but it's too bad it wasn't planned better.

We stopped for a break in the commercial zone north of Denali National Park, and unfortunately took advantage of some end-of-season sales, acquiring more tee shirts. With printed fronts. Then we rolled on into the canyon alongside the Nenana River. 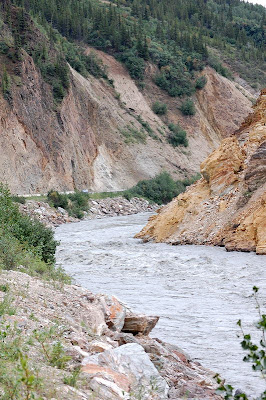 (to be continued)
Posted by Gullible at 7:49 PM