Smoke Gets in Your Eyes, Part One

Pablo and I rolled into a smoky about 6:30 Friday evening. This being , it was still daylight so I didn’t have to use a flashlight to read the basic map in The Milepost to see where the RV park was that I wanted. 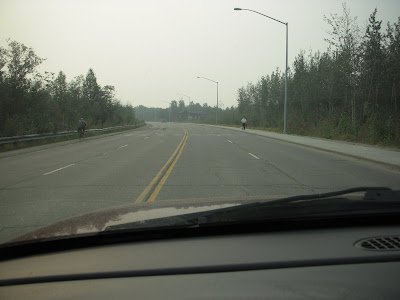 Smoke from nearby wildfires turned afternoon light into dusk.


Boy, am I ever lucky. I got to see ever so much of Fairbanks, even on that first evening when I needed to get to the RV park before the office closed at 8 p.m.. I mean, I saw parts of I’d never seen before. Some of those parts I saw two or three times. I found out which road terminates under the railroad underpass. I found out what roads were undergoing construction. I found out where the detours were. I found several RV parks, although they weren’t the one I was looking for, the one that was expecting me to be there before 8 o’clock.

I found the Safeway grocery store even though I wasn’t looking for it, and Wells Fargo bank, too. I found where the runs through . I found the Tanana Valley Farmer’s Market, and the Tanana Valley Fair Grounds, which is where the RV park I wanted is located, but couldn’t see, even after driving up and down the rows and rows of empty parking stalls. In the dust. And the smoke.

Why was I so lucky? Because I kept making wrong turns. Usually, I think my sense of direction is fair—at least when I’m paying attention. I can usually follow a map pretty well, too. In fact, I was the navigator for a 20,000 mile motor home trip in 1998 that took us from to , , and back to .

But, there are two places on earth where I am totally disoriented. One is in the area and the other is….Fairbanks. Look at it this way. is south, is northeast. There are only two roads you can take to get there. One road, the Parks highway, takes about eight hours to drive if you don’t push it too much and stop once in a while to make sure your legs still work. It’s 365 miles from . I piddled around a lot and took part of two days to arrive in .

The other route is a combination of the Glenn highway and then the highway. That one takes about three weeks or so to drive and you travel twice as far because of all the frost heaves, so for every three feet in a straight line, you go up three feet and down three feet, and pray your travel trailer doesn’t get high-centered on top of the frost heave. In addition to being a longer route to reach the same place, the Matanuska River is gobbling up parts of the Glenn highway right now, so I opted for the shorter, wider, more modern Parks highway.

Now, you’d think that if you wanted to reach a city that was northeast of where you started, you’d arrive at that city from the south, right? Not . When you reach , you ride into the city from the northwest, so instead of being on the southern edge of the city, you’re actually on the northern edge. No wonder I’m so disoriented. I even held the map upside down to try to figure out which direction to go. No wonder I made a gazillion wrong turns. No wonder I had to phone the RV park three times for instructions—even while I was driving around all the empty rows of parking

spaces in the fair grounds. 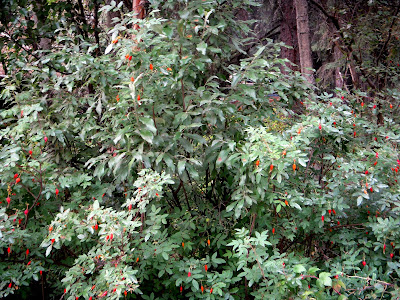 The red things all over these bushes are rose hips--the seed pods of the wild rose. The rose bushes line the RV park roads, so a month ago they must have been covered in pink blossoms.

Turns out, you have to make a jig and a jog and then—if you know where to look—you can see the sign fastened to the side of the shower house, except you approach the shower house from behind so how can anyone see that sign on the side of the shower house? So, almost an hour after I reached Fairbanks, and a few minutes before the park office closed for the night, I found the dad-ratted place hiding in the spruce forest next to the carnival rides they’re setting up for the fair this weekend.

Watch your head when you enter the little cabin to plop down your $20 bucks for a nice wooded spot with electricity and free showers. 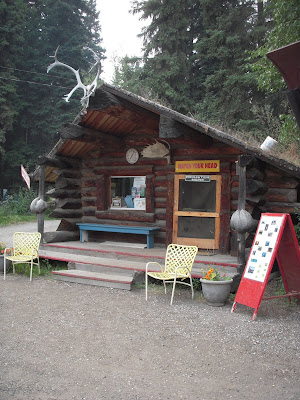 Then came backing into a narrow spot with spruce trees on either side and the electrical hook-up post hidden somewhere behind your trailer and a pickup parked crossways in the spot across from you, adding a triple whammy to backing up blind in the first place. I played with that for a while, even with the pickup guy offering to help, then saw No. 12 just ahead that was a straight back-in shot. I called the office and told her that’s where I was camping because No. 16 was too tight a turn.

Then, with Pablo happily ensconsed in the trailer, the thermostat turned up in case heat was needed, hot water heater on, electricity plugged in, the refrigerator turned to electric, the pickup unhooked,came the fun and games with the awning. In all the camping I’ve done with this trailer, I’ve had the awning out once. Every place else I’ve been, I wasn’t staying long enough to need it, or it was too windy.

That night, however, looked like it might rain harder than the sprinkles that were happening then, so to keep the entrance dry—but mainly because I’d never used the awning before—I started unrolling the contraption.

Okay, never mind. Let’s just say things didn’t go according to plan. A while later, after another camper came over to help and with the appropriate application of a large pair of pliers, the awning was unrolled and fastened down, the grass carpet spread in front of the entrance door, and I was sitting over by the neighbors’s campfire in my bright pink chair with a whiskey sour in my hand.

Truth is, I left him in the trailer because the smoke was lying close to the ground in the forest. Inside, he at least had relatively clean air to breathe. Outside, it wasn’t too bad, even though you could see the smoke from the wildfires if you looked off a few dozen feet. 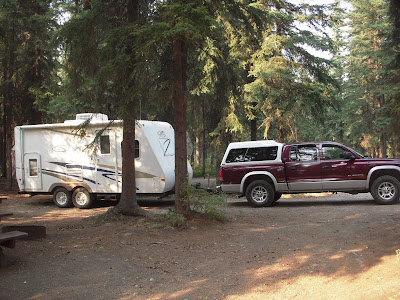 Doesn't look too smoky in this shot, but notice how orange the direct sunlight is.

However, I spent a very pleasant hour visiting with Judy and Doug, the folks in the RV next to me. They live in Wasilla, also home of The Sarah. Doug has a very handy pair of pliers with which he coerced the awning support to cooperate.

Then, it was off to bed--after I placated Pablo.