Only through the kindness of friends was I able to get where I got, so to speak. In addition to Ranger Ted and Andy, equally as important to this adventure were Holly and her parents.

The eldest daughter of Bruce and Betsey, Holly was a small girl when I first met her and her three sisters. They lived on what we jokingly called “The Ficke Funny Farm.” With horses, ponies, collies with massive litters of pups, Australian Silky terriers, cats, ducks and geese, pigs, birds, a pet porcupine, chipmunks, an iguana, and four rambunctious girls, you never knew what was going to happen next at their home. 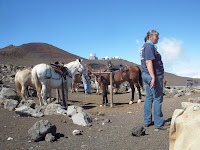 Today, Holly lives on Maui, owns horses and mules, and with her good friends Ranger Ted and Andy, makes frequent trips into Haleakala crater for work details. That’s Holly living her dream life. In her real life, she is the fiscal officer for the county water department, in charge of 30 employees, everything from meter readers to budget and finance people. 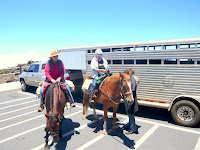 Almost forty years ago, I baby-sat Holly and sisters when her mother was recovering from an illness. She repaid the favor by arranging for me to accompany them into the crater. Actually, what she did was accede to my begging, and assured Ranger Ted that I would work my tail off in the crater as a volunteer worker. It was Holly’s horse Makane (ma-KAHN-nay) that I rode, Holly’s saddle, horn bag, and saddle bags that carried my gear, and Holly’s friend Ted’s Australian duster raincoat that was rolled and tied with leather straps behind my saddle. It was Holly’s menu I made fun of when she wrote “whatevahs” as the breakfast du jour for our final morning, intending it to be leftovers.

It was Holly who (mostly) saddled the horses, packed the gear and food, and helped this old woman mount a horse that was taller than me. Holly tended the horses, helped dig post holes for a new fence, did a substantial amount of the cooking and dishwashing, and watched out over this neophyte-in-the-crater like a mother Nene (NAY-nay), the rare Hawai’ian goose. 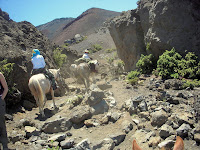 And it was Holly, sweet and lovely Holly, who offered us a choice of two routes out of the crater, neither being the one we rode on the way in. I was right behind her, and I spoke up first, choosing the longer trail, somehow knowing that the route I chose was her favorite. 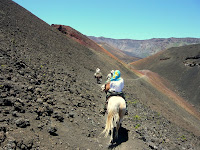 We know her as Holly. Everyone else knows her as Tye’s mom, including some hikers who visited the cabin where we stayed in the crater. Tye is Holly’s son, who is now attending Gonzaga University, where he has—as he did here on Maui—excelled in sports. 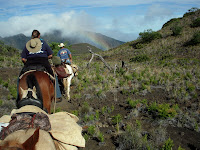 I have to tell you, if I'd known baby-sitting paid so well, I would have done more of it.

There are some people who, when they enter your life, seem like they’ve been there forever. I write that in the sense that they were meant to be a part of your life and to share their lives with you. Such are Bruce and Betsey. I was still in high school when I met them, brought together by a mutual friend, a radio disc jockey named Chuck who provided us teen-agers with the music called rock and roll. 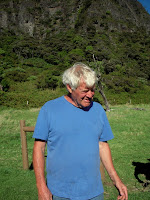 Once Bill Haley and the Comets rocked around the clock and broke it open, there was no turning back. Young kids searching for their generation’s identity went crazy for rock and roll, and soon every girl was in love with a sloe-eyed Elvis and every guy did, or yearned to, wear his hair long and in a style known as a duck-tail. Chuck played rock and roll every evening, broadcasting KFQD’s AM signal into the radios of teens across Anchorage, while our parents looked on in amusement or horror—and sometimes both. Chuck’s hook was an imaginary lion named Emma, and I, God help me, started Emma’s Fan Club. Once that happened, I was named its president, and Chuck asked his friend Bruce to sketch a fan club certificate, which I distributed among the faithful.

And that, as they say, started that.

Bruce hauling the post for the new fence at Paliku cabin in the volcano's crater.

A few years later, after I ditched the city lights of Anchorage and settled in the small ski town of Girdwood, Bruce built the first hotel at the fledgling resort. Right after that, he built the first condominiums in the state, working with an attorney to revise Alaska statutes to allow their construction. He and Betsey were frequent visitors to the resort, and one winter they operated a horse-drawn sleigh there. We were young and bullet-proof then, and Bruce could stop his sleigh-pulling horses only by running them into a snow bank. This by a man who sold insurance for a living. 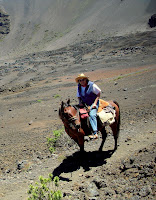 The beautiful Betsey on the beautiful Beau.
In the meantime, I was working my way through the few employers in town. I was getting weary of the second one—the resort itself—when Bruce offered me a job managing the condos, and I became the state’s first condo manager. Imagine that. 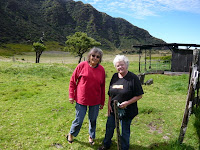 Betsey’s father, a well-known mechanic in Anchorage, took care of the various junkers I drove, and when Bruce sold me a gray 1965 Mustang, he took care of that, too. It was my all-time favorite car, and I liked it especially well after I wrecked it on wet black ice one winter and had it painted turquoise when it was repaired. 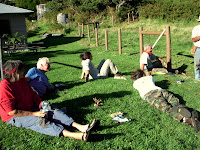 L to R, Betsey, Bruce, Whitney, Danielle, and Andy on the ground where Ranger Ted has worked them into. That's Ranger Ted standing up at far right, the last man standing.

Now Bruce and Betsey live in Kula on Maui, and it is with them that I am staying. They share their house with their daughter Holly and Liza, a long-time friend. Such is the custom in Hawai’i, where housing and living costs are scarce and expensive, and extended families often share. 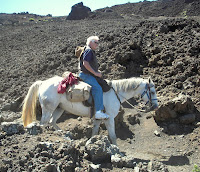 three dogs, two cats, umpteen love birds, cockatiels, cockatoos, and an Hawai’ian mynah that makes police siren sounds. Avocados fall from the trees at night, hitting the roof and waking me. A lanai (deck) wraps around three sides of this two-story home, and the front deck is the best place for watching the Hawai’ian sunsets. 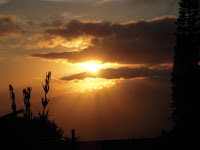 Maui is shaped like a lop-sided figure eight. Imagine taking a long bean bag and squeezing it tightly near the middle, but favoring one end. Now imagine that instead of beans, the bag contained molten rock the gushed up to form mountains. The mountain on the bigger side is Haleakala, while on the small side are the West Maui mountains.
The squished part in the middle is the isthmus that holds the two sides together, and one good tsunami crashing across it would divide Maui into two islands. From Bruce and Betsey’s front lanai, I can see the Pacific ocean on both sides of the isthmus. 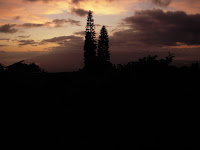 You'll have to loose very cloely at this photo to see the ocean on each side of the isthumus.


The biggest town on the isthmus is Kahului (kah-hoo-LOO-ee). This is where the airport is located. Sugar cane fields dominate the scenery on the isthmus and this is where the last remaining sugar mill of any size still operates. Its grip on a future life is tenuous at best.
Bruce and Betsey have been into Haleakala crater before, and knew what to expect. They tried to tell me, but until you’ve been there for yourself, you have no idea what awaits. 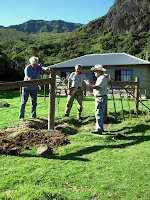 So it was that the six of us traveled into the depths of Haleakala, where ancient Hawai’ians gathered food, fought with enemies, lay on their backs studying the stars for knowledge about navigation , seasons, and time. With two piles of lava forming cairns on the rim and the stars showing the way, the old people pinpointed their place in their world.
I suppose it is appropriate that my journey into this natural wonder was made with both old and new friends, appropriate in a way that is felt and lived rather than spoken and discussed. And even more appropriate was that Bruce and Betsey and Holly, friends who have been in my life forever, traveled together into a place that has been there forever.

Bruce, Betsey and Holly at lunch. Holly is rescuing apples that were in a saddle bag on a pack horse. It didn't take long to figure out why all the horses wanted to follow the pack animal.

Now you know the cast of characters who went on this adventure. All except the four-legged ones, that is, and the two young women who joined our group, and became part of the family. I’ll introduce you to them next. 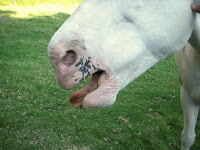