The Day the Earth Broke

It is said that when disaster strikes, our brains process the information differently than usual. Rather than a fluid, coherent video of occurring events, we see disaster as a series of quick photographic stills. In recalling those images, they are viewed much like the small comic pages of sketched characters that, when the pages are ruffled, seem to be moving.

When disaster intruded into my life on a quiet Friday afternoon in early, early spring, it wasn’t movement I was seeking. Quite the contrary. I wanted everything to hold still.

I had less than a half hour to get the news stories ready for the announcer at KFQD radio to read during the six o’clock news. This was our major newscast for the day, and I was the only one of two reporters working. I’d just returned from my rounds at the police station, the courts building, and city hall. Now it was time to check in by phone to the State Troopers office.

I kicked off my high-heeled shoes and rested my feet on the lower bar of the typewriter stand that sat perpendicular to my desk, took the handset off the phone’s cradle and dialed the number. A dispatcher, whose name I have long since forgotten, answered and began to give me details of a fatality. A man had fallen to his death off a railroad trestle far north of .

Seventy-five miles away in , and eighteen miles deep, the earth’s crust had had enough. A massive plate of rock called the Pacific Plate had been pushing against the North American Plate for ten of thousands a year, moving between two and three inches a year. Unable to rise on top of the North American Plate, it was instead forcing its way under it, causing a fault line where the two plates fractured to allow the movement. The crust was compressed, folded, and warped, causing some surface areas to sink and others to be shoved upwards.

I recall how I was sitting when the building began to shake: holding the phone to my left ear, leaning sideways into the desk, making notes with my right hand. The shaking increased. I glanced across my typewriter at Donna, the woman seated at the desk abutting mine. We exchanged smiles. Just another earthquake. Ho hum.

But this wasn’t just another earthquake. This one wasn’t going to be content knocking jars of strawberry and raspberry jam off the shelves in the grocery store, making a fine mess for the stock boy to clean up. This quake had loftier ambitions. This quake was a killer on the loose.

With rock crushing against rock only eighteen miles deep, the energy released by these forces was the equivalent of detonating a billion TONS of TNT. For long minutes, the earth battled against itself, rupturing along a five hundred mile length, and shaking 50,000 square miles of the crust.

Dennis, the station engineer, the man who kept KFQD on the air, ran out the front door of the station yelling, “My tower! My tower!” Behind him, a massive steel safe over four feet tall rolled across the floor, imprisoning the announcer in the on-air booth. Fortunately, the booth had two entrances, and he ran out the other, also yelling, “Everyone out! Everyone get out!”

The smiles at just-another-earthquake fell off our faces. I reached down, grabbed my shoes, and stumbled to the door. A step out of my chair, I head a loud crashing noise behind me, but didn’t stop to look. Standing up was almost impossible. Outside a number of concrete steps with no handrail stood between me and the snow-covered ground. I managed to get down the steps without assistance, but the woman behind me was aided by Dennis and the announcer.

Once out of the building, I staggered like a drunk across the parking lot to my car where I grabbed the door handle with both hands to keep upright. The tall tower behind the station was swaying horribly. The frozen ground under my feet was a spiderweb of cracks. 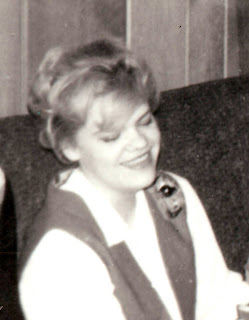 Behind me, across in the newest residential subdivision called Turnagain by the Sea, came sounds, sounds like tiny ladyfinger firecrackers exploding. I looked behind me, but a row of birch and cottonwood and spruce trees obscured my sight. I puzzled about those noises, but forgot about them as the shaking increased and increased and increased. I had more immediate things to worry about.

This can’t go on forever, I thought, it’ll stop any second now. It didn’t. It went on and on and on, seeming to slacken just a bit, then roaring back with renewed energy and increasing violence. I watched the ground, thinking it might open and try to swallow me. I needed to be alert and ready to jump to safety.