Two Old Women Plus Me 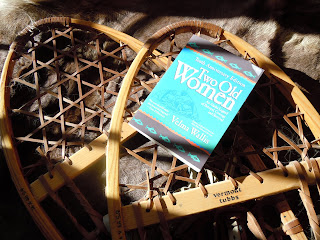 I finished the detective novel I was reading, turned off the Kindle, and went looking for something new to read, something different. I wanted nothing political because I’d just read three non-fiction political books (or, as non-fiction as political books can be) in a row and I was sick of reading about politics. That subject has been on the news and on my mind too much lately, what with all the questionable machinations in Congress over the health care bill.

I rejected a dozen or more books before I spotted Two Old Women by Velma Wallis. The only things I knew about it were that it was a best seller in if not elsewhere, and that it was a story about Alaska Natives. On the front cover was a quote by Tony Hillerman, “No one should miss this beautiful legend.” Well, it certainly looked to be a change of pace, so I selected it.

Brought to life by Willis' stark prose, this Athabaskan Indian legend tells of a nomadic tribe of Gwich'in living north of the Yukon River in eastern , and the starvation they suffered during the winter. With no game available, the chief decides they must abandon two frail women, Sa’ (Star) 75 years old, and Ch’idzigyaak (Chickadee) 80, to lighten the burden on the rest of the tribe. The two women cannot even carry their own belongings as the tribe moves and searches for food, so the chore falls to the younger women. And, the two complain constantly about their aches and pains.

I’ve had this book for at least a decade, unread. I stuff as much split birch as I can into the woodstove, turn down the damper, and climb the stairs to my bedroom where I slip between the red flannel sheets and make myself comfortable. At the back of the book is a short bio of the author, a Gwich’in Indian who has lived in all her life. I look at the information in the front of the book and learn that Wallis heard this oral legend from her mother.

The chief meets with his council and the decision is made. No one has the courage to object, not even Ch’idzigyaak’s daughter and grandson. The chief orders that a tent of caribou hides be prepared for the elders. The daughter leaves her mother with a roll of babiche (strips of moose hide), and the grandson surreptitiously hides his bone hatchet, taking care that no one but the two old women see this. The women sit in their hide tent before a small fire, stunned and angry at their betrayal.

Making the e-mail circuits for the past few months is a cartoon about Obamacare. It shows four senior citizens set adrift on an ice floe, with the caption about what will happen to seniors if Obamacare passes, with its rumored health rationing. How funny you think it is depends on your age.

With Social Security enacted in the 1930s and Medicare in the 1960s, most of us who are now eligible and becoming eligible planned our retirement around those programs. Our secondary insurance plans took Medicare into consideration for when we turn 65.

The women decide to travel to a place they remember that had plentiful fish, and they set out. Each morning it takes them longer and longer to get up as their bodies object to their exertions and the constant foraging for food. Still angry at being abandoned, the women struggle with their emotions while the fierce cold saps what little energy they have.

More than a year has passed while Congress fights and re-fights the health care bills. Sweetheart deals, back room arm-twisting, special considerations and promises, and outright pork guarantees have soured much of the American public on the whole process. Now, the U.S. House of Representatives might attempt to “deem” the bill passed by simply voting on and passing a number of amendments, rather than voting on the bill itself, apparently in an effort to preserve deniability for Democrats facing elections later this year.

A year later, the tribe returns to the place where they left the two elders. There is no evidence of them dying there. The chief is tormented by his decision to abandon the women, and sends a tracker to find them. What happens next is a moving tale of courage and redemption.

As I wait to find out what will happen to Medicare if this health care legislation becomes law, I think about my primary care doctor, the one whose group practice has “opted out” of the Medicare plan. In addition to the $4500 a year I pay in insurance premiums, I must pay my doctor for office visits and exams. I cannot submit this to Medicare or to my secondary insurance provider. He is at an age that he might choose to retire if the new legislation affects doctors adversely. I dread trying to find another primary care physician because most near me are refusing Medicare patients.

Perhaps things will become more known this weekend, before the president leaves on an overseas trip. Perhaps elected men and women will have the courage to vote their consciences. Perhaps they will find a way to provide medical coverage to the uninsured without bankrupting the country. Perhaps there is an answer other than setting our seniors adrift on an ice floe--or abandoning them in a caribou hide shelter to fend for themselves . 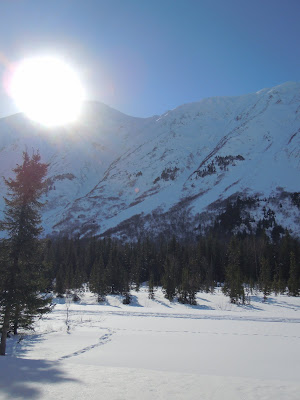