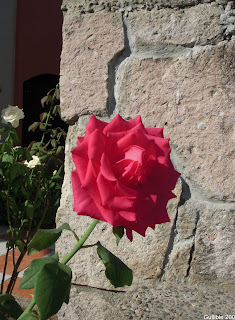 Jimmy loved me. He said so in a note I received this week.

It was delivered the modern way, an e-mail forwarded by a friend. In it, Jimmy confessed he loved me. At least, he loved me right up until he met Fronna, and then he dumped me in favor of her. I never knew.

We were seven when Jimmy loved me. That was sixty-one years ago and I suppose I should call him Jim, or James. He probably doesn’t go by Jimmy anymore, especially because in the intervening years he was a Marine, and none of the Marines I’ve ever known have gone by the diminutive of their proper names. But in second grade, I knew him as Jimmy, and thus I’ll continue to call him that until he asks that I not do so anymore.


Why he didn’t send the note directly to me deserves some explaining. In a few months, my high school graduating class will have its fiftieth reunion in Anchorage. There’s a web site dedicated to it, with vintage and current photos and short autobiographies posted for catching up with our friends. Craig, our volunteer webmaster, is doing a masterful job, especially when you remember that we are of a generation that does not have technology genes embedded in our DNA. Electric typewriters and Polaroid cameras were the hot gadgets back then.

Jimmy’s name and picture do not appear in our senior year book. He thinks it was the vice principal’s plot to keep him out. To set his mind at ease, I will write and tell him no one ever dated my diploma, and I wonder to this day if that means I never graduated.

(Jimmy is on the far left, me on the far right with the unruly hair.)

Craig didn't remember Jimmy from our class of about five hundred graduates, so with Jimmy’s bona fides in doubt, Craig asked several of us if we knew Jimmy, though he goes by a different last name now. I remembered him. I’d even posted a photo in an online Picassa album of a second grade class photo, and identified as many of the students as I could. Except, I wrote Jimmy’s last name wrong, and Picassa won’t let me correct it. (Remember what I said about those technology genes?)


Seven-year-old boys are not known for professing their love to seven-year-old girls, so I never knew that Jimmy loved me right up until he met Fronna in fourth grade, and then I was history.

I may still have been suffering from the mortal embarrassment I felt the previous Christmas when a first grade classmate (whose name I barely knew), gave me a Christmas present. He and his mom delivered it to me at home on Christmas Eve. I had nothing to give back, and was appalled. I still have that gift.

It was a sewing kit—a gray, hinged box filled with multi-colored cotton thread. Today, the piece of foam used as a spacer is crumbling into powder, but the thread is still bright, every bit as bright as the memory of that young bundled-up boy standing in a cold, snowy doorway with his bemused and smiling mom, holding out a gaily wrapped present, and my embarrassment. 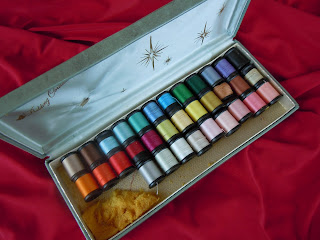 A couple years ago a mutual friend put me in touch with another classmate, Jack, who told our friend he thought I was the cutest girl in class, which for grade school kids is tantamount to declaring undying love and adoration. I never knew about that either. Jack had a twin sister, and I would go to their house to play, but Jack never spoke to me. Today Jack and I are good friends.

walked home from school with me in third grade for a couple days, then broke my heart the next by running ahead with the boys. In fifth grade, Wyatt perched on the edge of my desk and told me I was cute—then never spoke to me again. Wyatt was of the Marlon-Brando-come-to-town-n-a-motorcycle kind of boy. Just my type.

When I was in eighth grade, junior high school, we had a Sadie Hawkins Day dance. The tradition was that girls asked boys for dates for this dance. I asked a boy whose name I can’t remember now, and I suspect that has a lot to do with the embarrassment I inflicted on him with the corsage my mother fixed up for him. It was a small paper plate with two artificial sunny-side-up eggs and a rasher of bacon, all decorated with ribbon. The boy and I “danced” once, then retreated to opposite sides of the Central Junior High gymnasium and became one with the walls. He ditched the corsage rather early and avoided me afterward.

My crushes, and there were a couple, went unrequited in high school. I dated Art a couple times, but mostly ran around with a small group of close friends, both boys and girls.

Jan gave me my first kiss. It was during senior week, right before graduation. Actually, it was a week of one on-going party, and when Jan leaned in the window of my (parent’s) car and kissed me, I think beer might have had a lot to do with it. I don’t think we’ve ever spoken since, though I’ve seen him at some reunions over the years.

I am really looking forward to this fiftieth reunion. Maybe this year, now that we’ve learned how sad and unfulfilling it is not to tell people we like them, admire them, and value their friendship, I’ll tell Jan he was the first boy who ever kissed me.

Jimmy won’t be at the reunion so I’ll have to tell him by e-mail how sweet it would have been if he’d told me he loved me when we were seven. It would have been nice to know. Maybe if we’d been able to do that all along, I could have been spared much of my teenage angst, thinking no one cared, an angst that extended well into my adult years.

In the meantime, I have a very old sewing kit and some memories: a message from Jack, Wyatt's unexpected, thrilling declaration of my cuteness, a funny Sadie Hawkin’s Day corsage, sharing a milk shake at the Oyster Loaf café with Art, a kiss from Jan.

And, I have an e-mail forwarded by a friend: Jimmy loved me when we were seven. 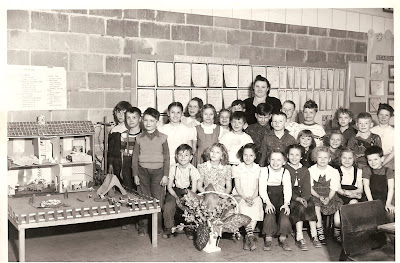 Mrs. Graham's second grade class at North Star Elementary School on Fireweed Lane, 1949-50. Jimmy stands to the right of Mrs. Graham, I am the one with unruly permanent one boy away, and Jack is at the far left, with a striped tee and suspenders.


This story is dedicated to the members of Anchorage High School Class of 1960, and to class reunions everywhere.