All for Beer Cans and McFastfood Wrappers

This summer seems to be… Wait. Truth-telling time. The word “summer” is used euphemistically here. I don’t know what this particular season should be called. What would you call prolonged cool, wet, and windy? ?

Anyway, this time period seems to be the season of my epiphanies. I already mentioned one—that I was as close to being a city girl as I’d ever feared. I’ve had two more.

It all started last week when I made a promise to myself: No more litter-picking until I spent some quality time with my much-neglected house. The promise coincided with the weekend, so Saturday I spent removing everything from the garage floor and taking it all outdoors. Then I hosed the floor, scrubbed it with a broom and that green stuff, then hosed it again.

I vacuumed the strips of outdoor carpet that lie here and there, cleaned the tool shelves, and mopped the laundry room floor. Then I sulked about how tired I was, and cleaned the four bathrooms in this house—two full, two half. Sunday I went up to the loft and once again mounted a search effort to locate the surface of my desk.

However, each afternoon around 3 o’clock, I felt a familiar pull. I heard the litter call my name. I yearned for the roadsides covered with wildflowers. I craved the three mile walks. I felt cheated, unfulfilled, emotionally starved if I did’t answer the call.

Bingo! Epiphany number two! This litter-picking gig? It has transcended giving back, a hatred of roadside litter, mere physical exercise. It has become an OBSESSION. There. I said it. Obsession.

I have about seven miles total of various gaps to complete before I can connect the dots from Mile 23.5 through to Mile 68 of the .. I've also cleaned several miles of the . I’ve earned a little leisure time. And yet, every afternoon I feel compelled to go.

Yesterday was no different. As three o’clock neared, I made another decision. I would tackle a chore I’ve been putting off for two years, and then go litter-picking if it wasn’t too late afterwards.

Here, I’ll walk you through it:

This is the half-door into the crawl space under my house: 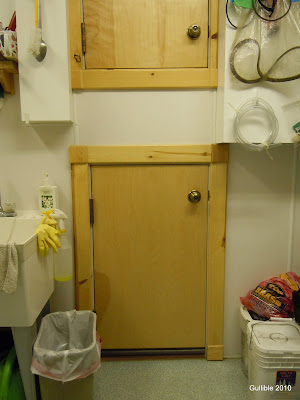 This is the crawl space, or rather, part of it. It’s a terrific storage area. 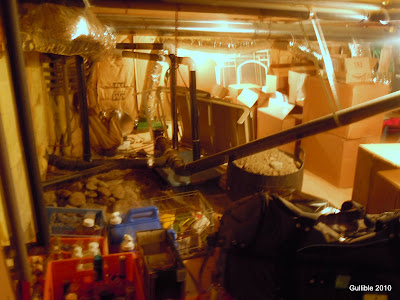 See that pile of rocks and that bucket of gravel? They are from an excavation made after my sewer line froze a couple winters ago, and I left a drain-cleaning snake in the line overnight (in a fit of pique) and it froze in, too. None of the steam-thawers wanted to chance getting their equipment stuck in the line, so I had to wait until spring when it thawed out. A friend made me a temporary sewer line by burying a plastic container, a pump, and over-the-ground sewer drain line to the septic system. 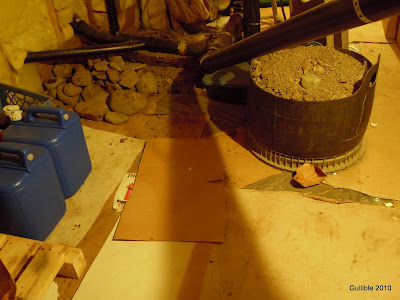 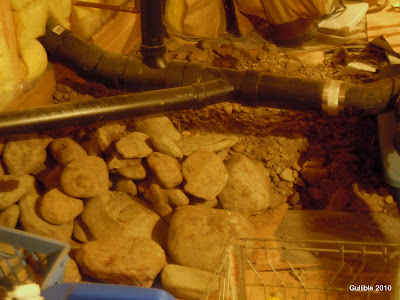 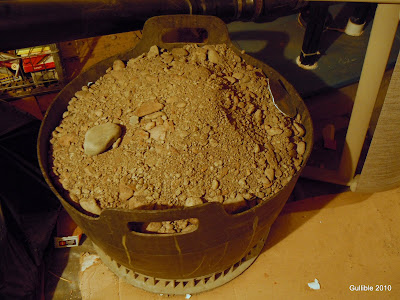 The object of this whole chore was to take those rocks and that gravel, load them into smaller buckets, dump them into this wheelbarrow… 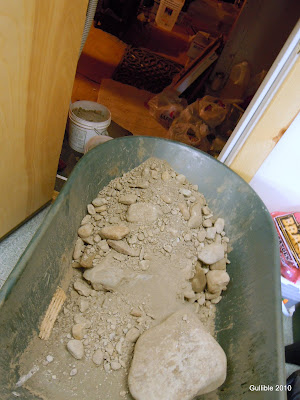 …and dump the wheelbarrow into this hole I’ve been filling beside the car port. 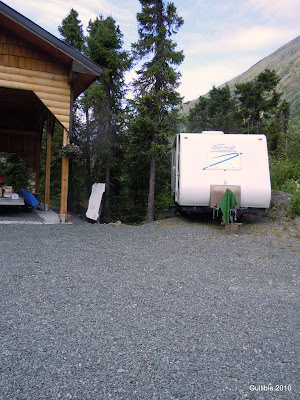 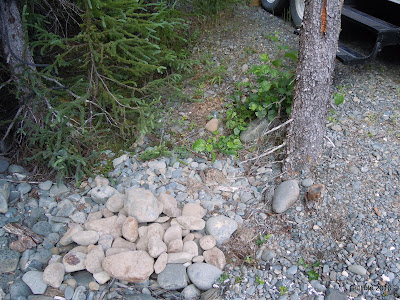 The reasons I’ve been avoiding this chore are many. The primary one is that while I can stand up in the crawl space, I can do so only between the floor joists. That means that I must carry the little buckets while bent over. When hauling the gravel, I also had to bend down far enough to duck under the drain pipe. 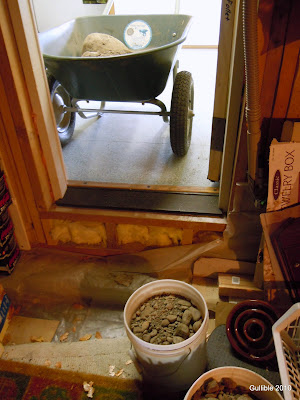 I began with the pile of rocks. Six buckets and two trips carrying one big rock each, that portion was done and the vapor barrier back in place. Each trip was about fifteen feet. 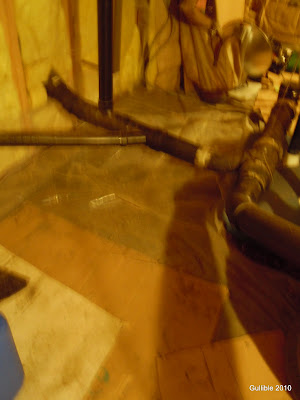 Then I tackled the gravel-filled bucket, which is a 55-gallon plastic drum cut in half. 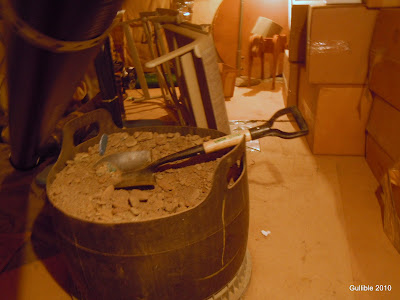 Gravel is heavier than rocks and the wheelbarrow demonstrated what happens when the load is not evenly distributed by dumping it on my nice clean laundry room floor. I knew that. Another re-learning experience. 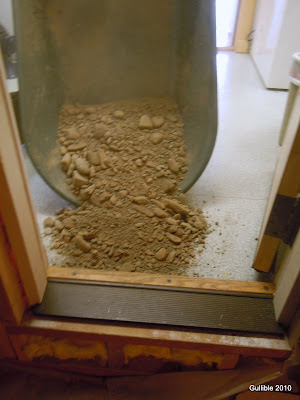 Ten buckets later, I was able to drag the big bucket to the door, but it wouldn’t fit through the narrow opening. 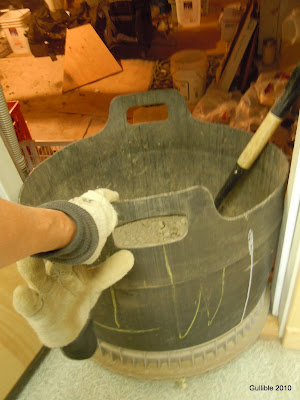 I turned it on its side and pulled it through without spilling any. 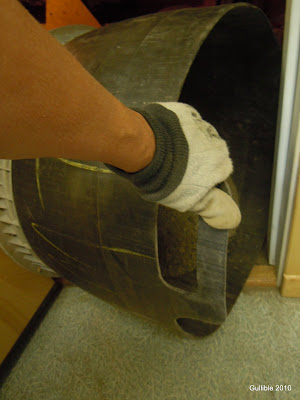 By this time I was dripping with sweat, even though the temperature in the crawl space is in the lower fifties. That sweat was running down inside my dust-covered glasses. I paused at the laundry tub and rinsed my glasses, as well as my face. 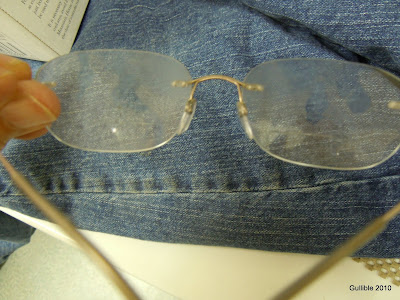 Then I loaded the barrel onto the last wheelbarrow load… 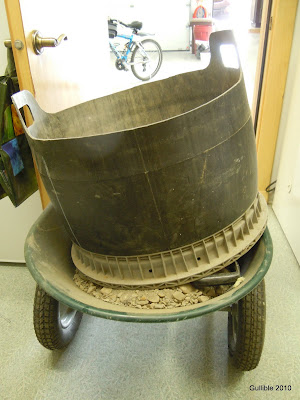 ..and dumped it outside. 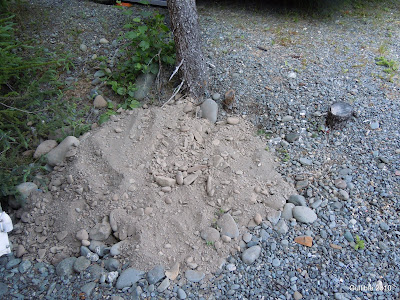 The crawl space chore was done. Now to clean up the mess. Nothing like a central vacuum system with an outlet in the garage. 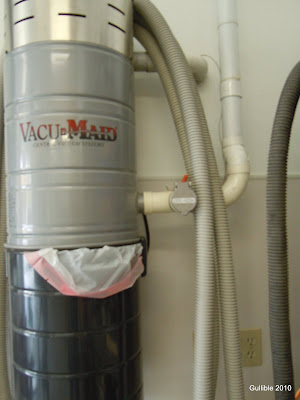 After that, I was free to go litter-picking. Except, I couldn’t find my camera and I always take my camera. I searched under the house. I searched the laundry room. I searched the garage. Finally, I gave up and got another camera—one of the main reasons I have multiple cameras--and sat down on a chair in the garage to put on my boots. I happened to look at the tool shelves during this process, and saw a strap hanging from a shelf. 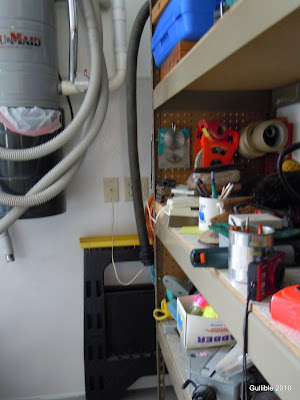 That doesn’t look right, I thought. 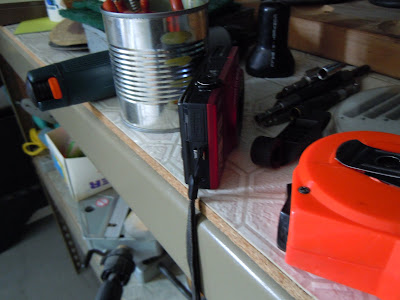 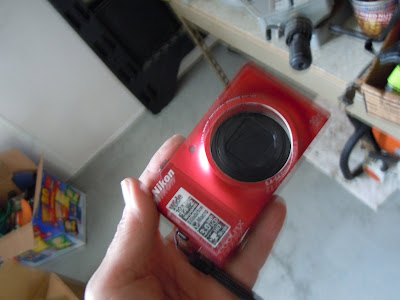 Total time from start to finish of the crawl space job, including the time to film this documentary but not counting the camera search? One hour and fifteen minutes.

Bingo! Epiphany number three: To paraphrase Winston Churchill, “You have nothing to fear but laziness itself.”

Now, did anyone notice where I’d put down my other work glove? 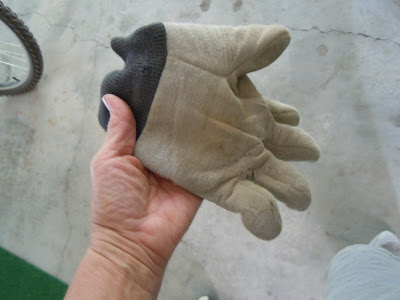