My friend Woody is a Marine. He's not on active duty, but once a Marine, always a Marine. He recently adopted two green-winged macaws. Gina and Lola are five-year-old sisters. I'm not sure which is which. 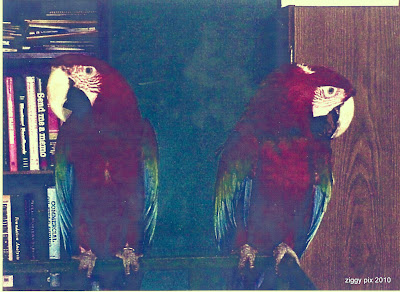 For the past couple months they’ve been adjusting to life in the Woody household, also occupied by Woody’s wife Deb, occasionally by his three grown sons, and an ever-differing number of various breeds of dogs, not all of which belong to Woody and Deb.

Here they are with Zak, the middle son, 24 years old. He's a commercial diver/pile driver. Woody’s “girls” very nice birds. Well, they WERE very nice birds. Now they are living with a Marine and I think he’s teaching them to be Marines. 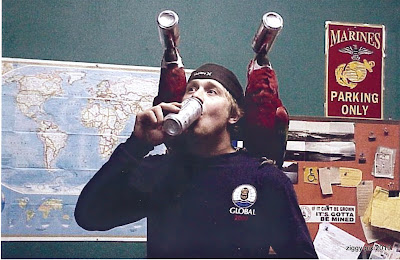 Oh, yeah. Woody asked me to be sure to tell you something. I can’t quite remember what it was. I think it might have been, “No humans were harmed during the making of this picture.”

And maybe I was also supposed to say something about Woody making sure the beer can was empty, rinsed with water and the tab removed before he gave it to Zak. So the lad wouldn't get hurt, you know. Can't be too careful. I think that’s what Woody said.

I wonder if the girls can say "OOO-RAH!" yet?