Chapter Six: In which I confront an unpleasant epiphany...and sulk. 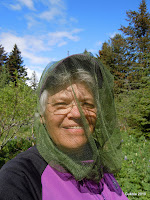 I reckon y’all have this image of me as some female Alaskan mountain man. You know—I catch a limit of red salmon and have them canned or in the smoker before breakfast. 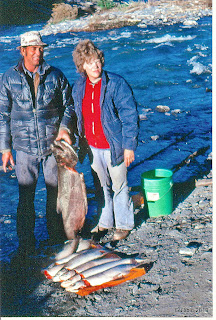 Hubby and I with sockeye and king salmon from the famed Copper River. He caught the biggest. Guess who caught the most.

Then I buck, split, and stack a cord of firewood. Afterwards, my pal The Sarah and I hunt and field dress a bull moose. She goes to a Tea Party to speechify while I butcher and freeze the best cuts, and make Genoa salami, and Polish and Thuringer sausage from the rest, saving the nose for jellied moose nose, which is a lot like head cheese. 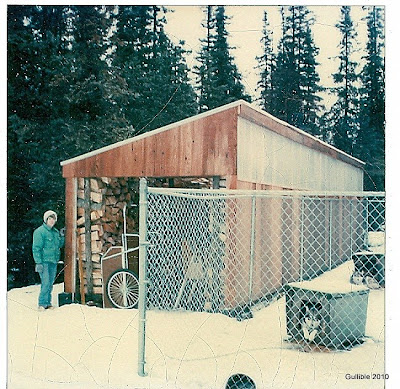 When I’m done with that, I might hitch up the dogs for a run to the post office, or maybe pick a five-gallon bucket full of cranberries and make sauce for the Thanksgiving turkey, and quarts of cranberry liqueur for sipping in front of the wood stove. 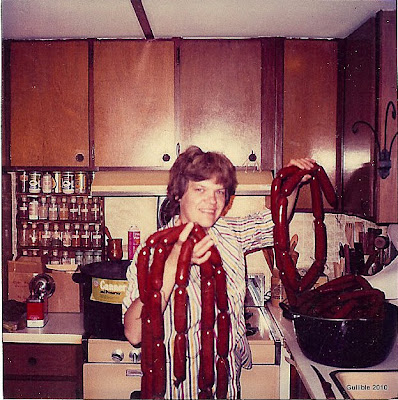 In between, I pick up litter along a few miles of highway—just for some exercise.

Yeah, I reckon that’s what y’all think. And if I've written anything here to give y'all that impression, well, believe me, it was purely intentional.

Well, I have a confession to make about that mountain man thing.. Been there, done that. 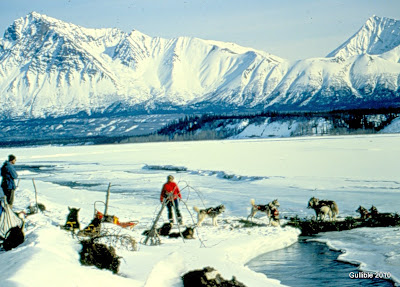 Me in red, my dog team on the spruce pole "bridge" at the Nizina River.

Except for the The Sarah part. I kind of fibbed about that. Not the moose part—the Queen of Quit part. Never met The Sarah, so she can’t possible be my hunting buddy.

The jellied moose nose? Once was more than enough of that stuff.

And the rest of it? Mmmmmm---I seem to have outgrown all that. 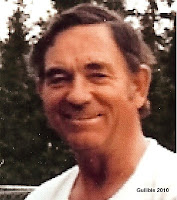 Not my fault, either. For that, I lay the blame squarely on the man-who-would-be-my-husband. He lied to me.


This is the guy my mother should have warned me about. Before I married him.

It began when we were in that getting to know each other stage, talking about things we liked to do. He mentioned motorcycles, snow machines, ATVs, and fishing and hunting. Oh, boy, I thought. An outdoorsman. I mentioned things like downhill skiing, dog mushing, backpacking, camping, and fishing.

“Oh,” he said about the backpacking/camping, “I’d like to learn how to do all that.” I saw a future stretch out before us--a sunlit trail through the forests and into the alpine meadows, wildflowers all around us, moose and Dall sheep and other exotics on the nearby slopes..

Too late I discovered his idea of sports equipment all involved attached internal combustion engines. And when he found out tents didn’t come with indoor facilities and hot and cold running water, well, that was the end of that learning experience. 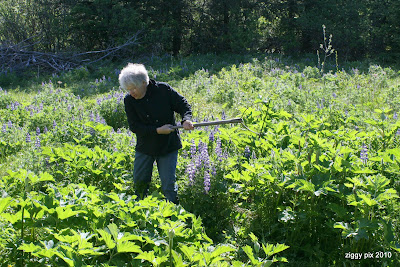 Whacking pushki to make a trail to the outhouse. Note the heighth of the lupine.

I was thinking about all this on our first morning at the Wrangell-St. Elias park service Esker Stream cabin as I whacked down pushki to make a sap-free trail to the outhouse.

JJ wanted to hike the beach towards Hubbard Glacier at the head of the bay, so we loaded our backpacks with lunch and hip boots and headed for the beach. I also wore a fanny pack pulled around so the pouch was in front to keep the bear spray at the ready.

When we topped the rise and could see the bay, I said to JJ, “Look at all the ice.” Before us the bay seemed clogged with chunks of ice calved from Hubbard Glacier, and the retreating tide left hundreds of pieces of ice on the beach. 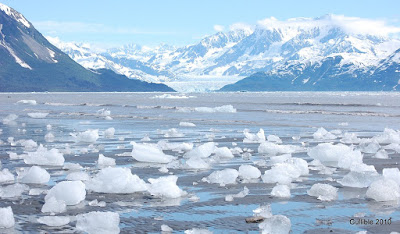 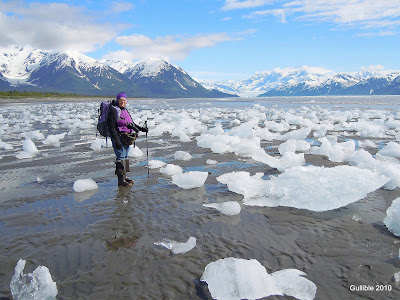 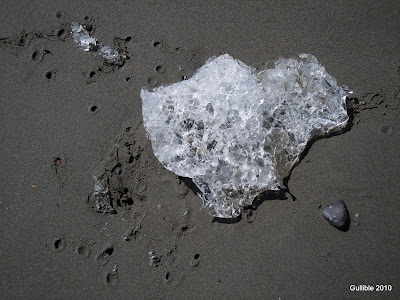 A crisp breeze kept us bundled up and moving. Eventually we reached the first of many fast-moving glacial streams. We checked it out for a good crossing point. That’s when I realized I really didn’t want to wade it. It wasn’t so much its depth that was dangerous. It was the swift current and silt-laden water. I’d been raised near , whose clay and silt beaches have been fatal to the unsuspecting many times.

JJ, though, put on her hip boots and walked into the silty water, feeling her way with two hiking poles. I stayed behind and took pictures. Then she came back safely. I looked at her and said, “I can’t swim.” 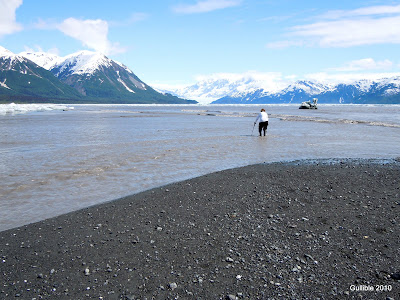 JJ feeling her way across the glacier stream. 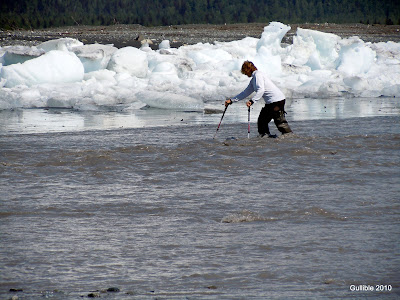 Reaching the far side.


Well, that was a feeble excuse and I knew it. Nobody can swim with hip boots full of water. I knew she was disappointed, She had studied the maps of this area and had planned carefully. Too late she learned she’d hooked up with a wimp. 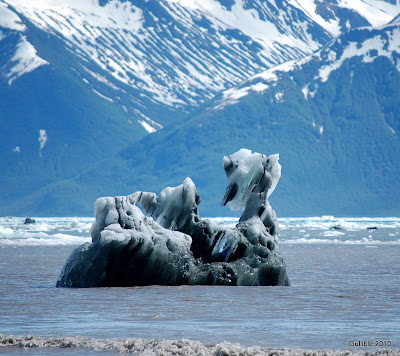 This ice berg reminded me of a backward-looking carousel swan. The dark areas contain lots of silt--rock ground up by the glacier.

We started back, and then paused for lunch while we watched a large cruise ship progress up the bay towards the glacier. I felt bad—bad for JJ’s ruined hike and bad for me. Not only was I scared s—tless of the bears and afraid to cross the streams, but I had realized something about myself.

Note the cruise ship on the far side of the bay, heading towards Hubbard Glacier.

More than thirty years had passed since I’d thrown a forty-pound pack on my back and wandered off into the wilderness for a week. Thirty years in which a series of ever-growing recreational vehicles became my way of camping. Thirty years. 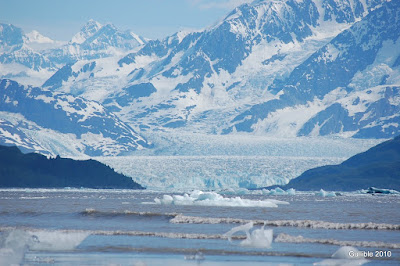 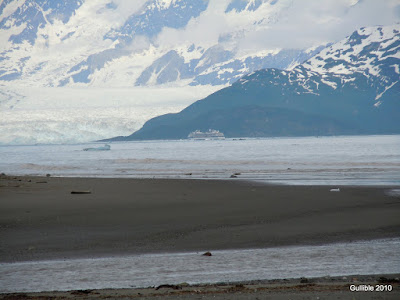 The cruise ship will round the point to the right and enter Russell Fjord.

It was a quiet walk back to the cabin. Every so often I’d turn around and watch the cruise ship. Then, it disappeared around the point and sailed into Russell Fjord. 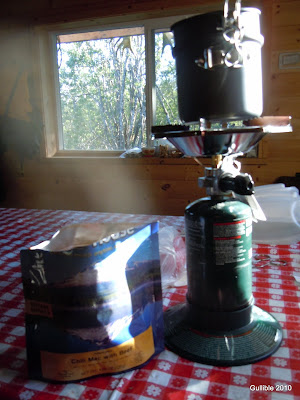 When we reached the cabin, I said I would start boiling water for eating and drinking. JJ went out on a hike by herself. 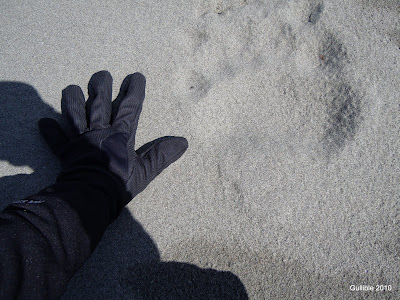 Front paw print of brown bear and my hand. 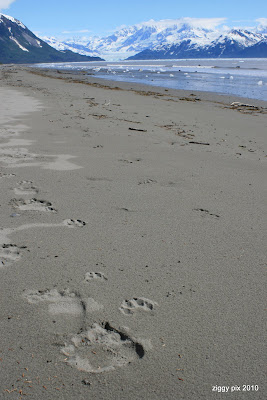 As I waited for the water to boil, I admitted something to myself: Who was I kidding? I wasn’t some female version of a mountain man. I’d grown soft. 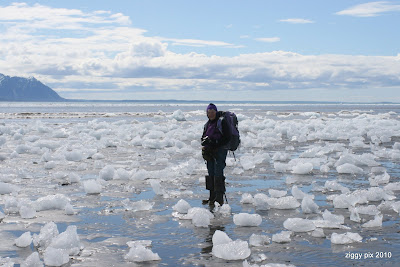 I no longer had that awareness that helped keep me safe in the wilderness, that ability to enjoy the wilderness while remembering that humans rank below predatory, carnivorous mammals, fish, and reptiles on the food chain.

I may as well have been a city kid.