Here’s the thing you should know about : IT ALWAYS RAINS IN WHITTIER.

Always. So, if you should pass through that two and a half mile long tunnel and not get hit by a train and all of a sudden find a strange glare on your windshield that makes you put on sunglasses even late in the evening, well, you’re in another dimension. You certainly aren’t in . 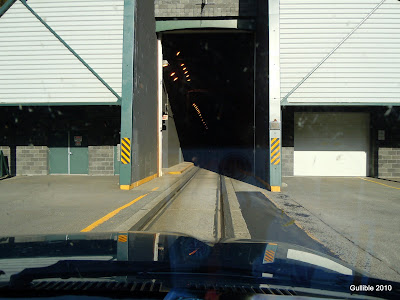 Entrance to the tunnel. Note the railroad tracks.

I could give you a whole bunch of totally fascinating information about that tunnel, and how it’s ever-so-unique in the world, but you can read that for yourself (http://www.dot.state.ak.us/creg/whittiertunnel/tundesign.shtm), otherwise, I might never get to the scary bear stories.

Suffice it to say the tunnel is a single lane wide and is shared with the railroad. The tracks are cemented in and you drive on the cement pads. And sometimes the tracks so there’s a lot of moving around and back and forth an trying not to collide with the rock walls. There’s a whole big control room with scads of computers that theoretically control the flow of automobiles, trucks, busses, and trains coming and going, so that the twain shall never meet…. But you know about computers, right? 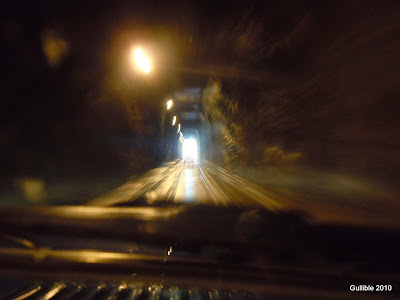 Sorry about the fuzzy picture inside the tunnel. You are NOT allowed to stop and the ride isn't exactly smooth.

Anyway, we made it through the tunnel and emerged in that other dimension where the sun was shining. I’ll call it for simplicity’s sake, but we both know it always rains in Whittier, right?

JJ and I wandered around, had a bite to eat, and wondered what dimension we were in because the sun was shining and it was warm and the wind wasn’t screeching through like it was playing pick-up-sticks with the freight connexes stacked all over, while waiting our turn at loading onto the ferry Kennicott. I say “loading” because JJ was taking her truck, which is a good thing because it would have taken us a half dozen trips each to load all our supplies and gear if we had to walk on.

has an interesting history, most of having to do with it being an ice-free port during WWII. Today fewer than three hundred people live there year ‘round, mostly supporting the state ferry system, the railroad, local businesses, and the tourism industry. Huge cruise ships dock there, freight pours into through , and tourists flock to to go on the many daily tours through . 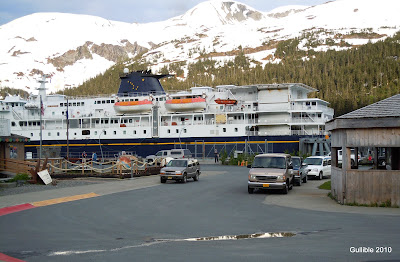 The state ferry Kennicott in Whittier. Note the Alaskan flag painted on the stack.

And most of the locals live in one big building. 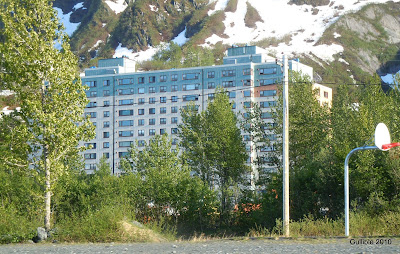 Here’s a photo of the ferry’s stern where the vehicles are being loaded. This was an easy one. You simply drive down a ramp, turn around where the ferry guys tell you and back up in line with the other vehicles. Just wait until we get to Yakutat and you see how we get off! 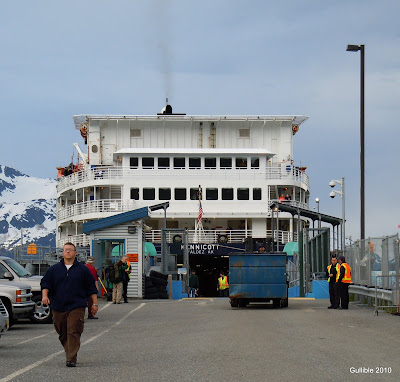 Then while you piddle around trying to get the gear you need for the next twenty-four hours (you aren’t allowed access to the car deck once the ferry is under way), the guys get the vehicle strapped down at four points. We are going across the , after all, and one wouldn’t want all those vehicles rolling around like they’re in a pinball machine. 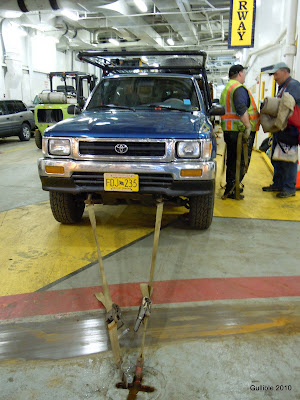 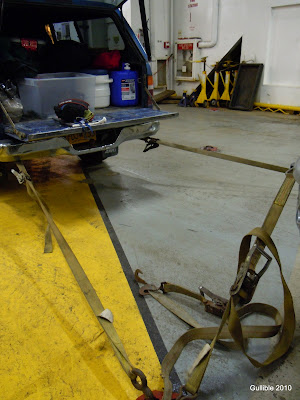 Lugging all your necessary stuff, you go up two decks to the purser to claim the key to the “roomette, outside” that you’d reserved for $52.00. For an extra three bucks you get a pillow, sheets, a blanket, and towels. You smile sweetly and look lost, and a steward not only shows you to your room, but carries your linens for you. ( Have I ever told you I do so love my gray hair?)

Ah, so here’s my “roomette, outside.” And that’s pretty much it. A room with two bunks, porthole, facilities down the hall. Just enough depth for the door to swing closed. Or, is it a passageway on a boat? 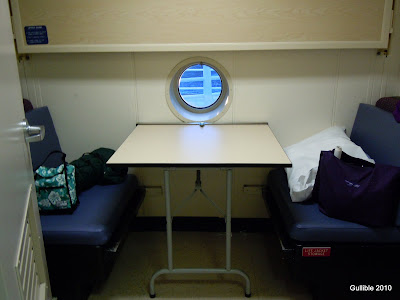 I am in this roomette by myself, so I make up the bottom bunk, just like in a motor home. Two rooms away, JJ is doing the same. 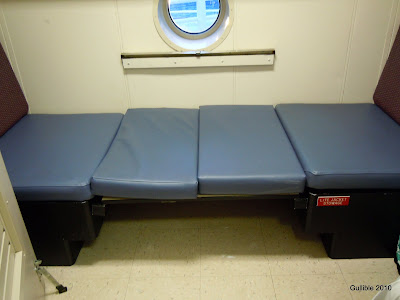 Be the way, they also have “roomettes, inside” which means no porthole, and are cheaper, but that sounded an awful lot like sleeping in a closet. There are also much bigger rooms, including some with bathrooms. There aren’t enough rooms for all the passengers, so in another chapter I’ll show you what the roomless do.

I spread out the Big Agnes sleeping bag (petite, extra width in the hips because I sleep with one leg drawn up), locate the Kindle, and my stateroom is ready. 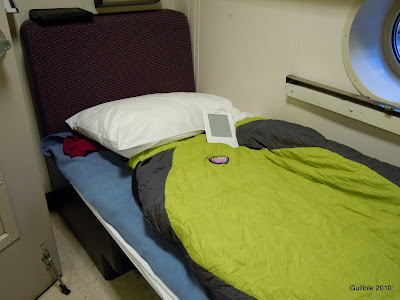 I check out the shower room, and it’s sparkling clean. The last time I was on one of these state ferries, the showers were coin operated. Now, they’re free to everyone on the boat. 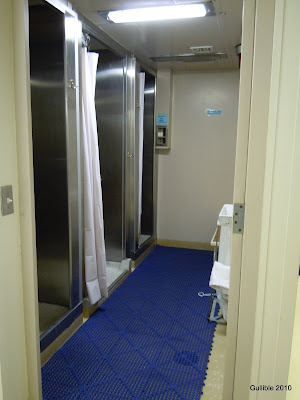 I walked out on deck and took some photos of . 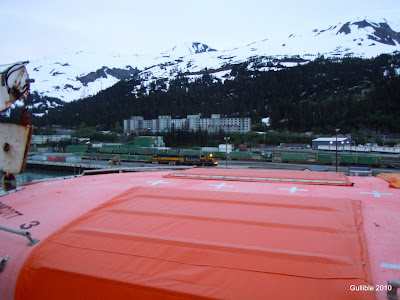 All those green things stacked up the the railroad yard are shipping containers--connexes. 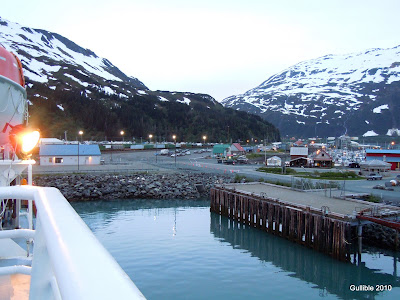 Then at 11 p.m., the scheduled time, the Kennicott pushed itself away from the dock and sailed into Prince William Sound…as a soft rain started to fall.

As I said before, it always rains in . 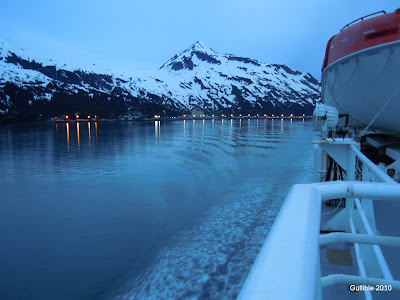