I don’t know what happened. One moment I was standing up, talking with a friend, and the next I was flat on the floor unable to control my body. I remember my back arching as wave after wave of vertigo washed over me.

I was scared. And mystified. I knew it wasn’t an epileptic seizure. I’d seen those before, and this wasn’t anything like them.

Eventually the vertigo stopped and I got to my feet. Slowly, carefully, but erect. I leaned against the nearest wall until my heart rate and breathing returned to near normal. My friend was horrified and wanted to take me to the nearest emergency room. I nodded in agreement.

Just as I pushed myself away from the wall to go to her car, another seizure hit and I was on the floor again. Again with the tsunamis of vertigo, again with the complete lack of bodily control.

Into my field of vision came a familiar face—my first love. I saw concern in his dark eyes, felt him take one of my hands with both of his and hold it as the seizure ebbed. I lay on the floor until my joints no longer felt like over-cooked pasta, wondering how he knew I was in trouble, how he’d reached me so quickly. All I could do was look at him. I saw him recognize the fear in my eyes.

He helped me stand and supported me as we moved toward the door. Within a minute whatever-it-was struck again and down to the floor I went. Over and over and over again, the same scenario--a debilitating seizure and a couple minutes of relief. On and on and on. We made little progress towards that emergency room.

During one of the recovery spells, I willed these seizures to cease. I won’t have them, I told myself. I refuse to have them. I‘ll just lie here with my eyes closed and do some deep breathing exercises, calm myself, free myself from them. 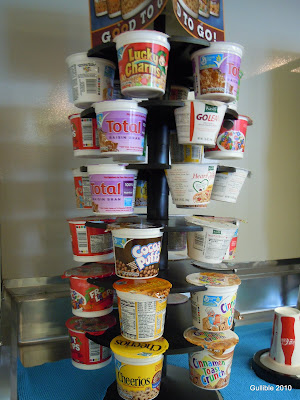 Breakfast cereal display on board the Kennicott. I thought the Froot Loops were appropriate.

I opened my eyes. I was lying on the bunk in my “roomette, outside.” My limbs felt okay, but the vertigo waves continued to annoy me. Then I realized what was happening. 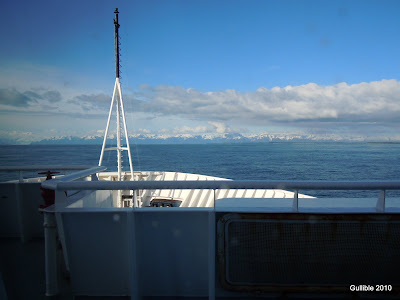 Scenery crossing the Gulf of Alaska.

I was on the ferry Kennicott and we were crossing the . Obviously the boat had encountered swells, and the pitching motion had penetrated my dreams. The vertigo seizures were all a dream, and now I was awake. 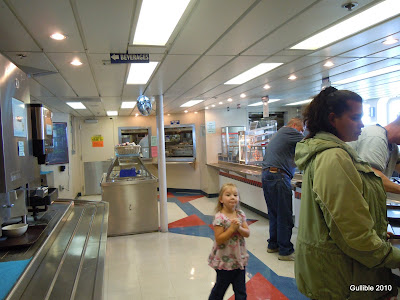 Food line in the ship's cafeteria.

I have no idea how big the swells were. The M/V Kennicott is a certified ocean-going vessel with a stabilizing system, yet it was pitching forward and back, which made walking down a passageway quite entertaining. You stopped at the lowest point of the pitch when the bow began to rise. Then as the bow settled into the next trough, your feet raced ahead at breakneck speed. 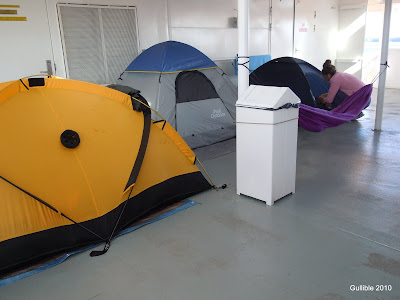 This is what you do when you don't have a stateroom or a roomette.

Repeat over and over and eventually you got where you were headed. Sometimes you wound up somewhere else, but what the heck, exploring’s fun, too. Just make sure you weren’t too far from a solid vertical surface to hang onto. 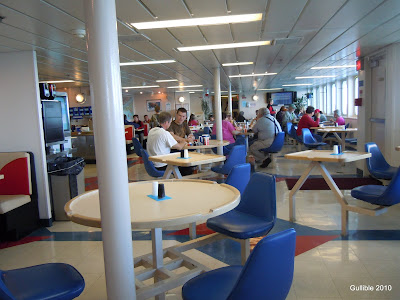 I could have straightened this photo of the Kennicott's dining room, but I thought I'd inject a little ambience.

I found JJ eating breakfast in the cafeteria. I drank my tea and OJ, and ate my apple scone. Cooked food smells penetrated my awareness, and my stomach (very, very experienced with motion illness) reminded me that hanging around food smells was not a good idea. 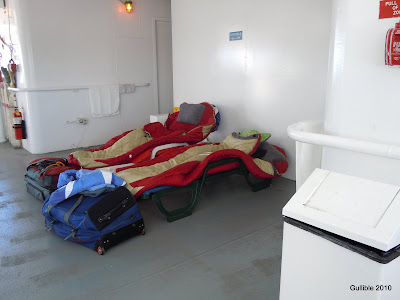 It’s been almost five years now that I first suspected I should abdicate my crown as the Queen of Mal de Mer or Mal de Anything that Moves. Five years and plenty of ideal circumstances, and not a twinge of my old nemesis.

I decided my bunk, my Big Agnes sleeping bag, my nice cool “roomette, outside” was where I would spend the day. And, I did. I also took lots of naps, again dreaming about the vertigo seizures. 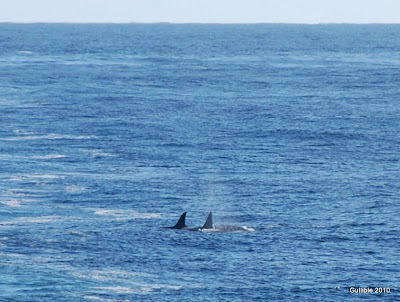 Orcas off the stern.

By late afternoon, we reached calmer waters. A pod of orcas passed behind the ship as we sailed alongside , an 18,000 foot gem in the . Across its front, the 60-mile-wide face of Malaspina Glacier seemed to be in view for hours, and I guess it was, because the Kennicott travels at 16 knots. 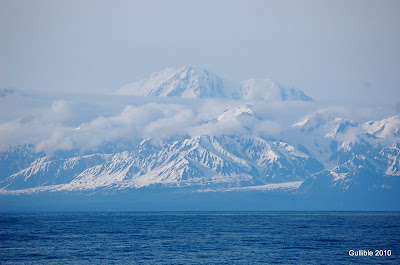 Wow. Mt. St. Elias with the Malaspina glacier in the foreground, even if you can't see it.


Then we crossed the mouth of and motored into the protected waters of Yakutat. 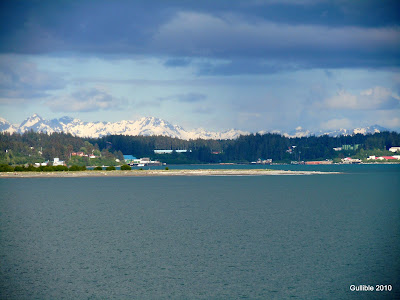 PS: NONE of the interior photos of the ferry were taken on this crossing. I know better than to put a camera up to my face on a pitching boat. All were taken on the return trip, which should give you a big hint as to whether or not I survived the bears of Yakutat Bay.