How to Start a Vehicle during an Alaskan Winter, circa 1950s

“Greta slammed the door on her 1952 GMC truck and then kicked it for good measure.”
The result:
“Stupid truck!” she yelled.  “What’s the matter with you, anyway?  It’s only 35 below!”

She double-checked the connection between the truck’s headbolt heater and the extension cord, walked back up the trail to the cabin, and slammed that door as well.  She threw her beaver fur-trimmed seal skin hat on the couch and kicked off the heavy white Army surplus bunny boots.  Leaving her parka on, she walked to the kitchen sink and turned on the hot water faucet.

Greta waited until hot water ran from the tap.  She took the bar of Lava soap from its dish and started scrubbing oil stains from her hands.  “Darn truck won’t start even after I drained its oil and kept it warm inside all night,” she complained out loud, as if the gritty soap could do anything about it but empathize in silence. 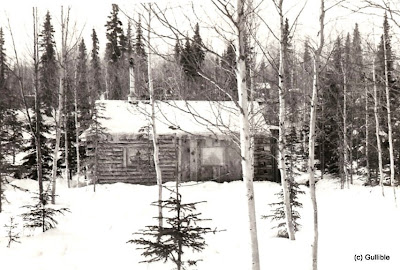 She dried her hands on a towel and poured another cup of coffee from the drip pot on the oil-barrel wood stove.  Setting the mug on the flat plate welded to the top of the stove, she added a couple sticks of split birch to the fire.  She took her mug of steaming coffee and stood at the front window, making sure the truck could see her.

Once again she set down the mug, this time on the wide spruce window sill.  She slowly took off her down parka, making a show of the process so the truck would notice her short-sleeved shirt.  She picked up the mug and took a sip of coffee.

Fifteen minutes later, she donned all the cold weather gear and trudged down to the truck.  She put a foot against the space between the truck cab and the truck bed and pulled on the door handle until the frozen door opened, then fingered the latching mechanism on the door so it would close instead of banging against the latch, and got in the truck.  She pulled the choke out three feet or so, slipped off the right bunny boot so her foot would fit on the throttle pedal, and pumped the pedal five or six times.
She turned the key.
“Ernfff,” said the truck.  "Nnnfff."

“You’re gonna make me late for work,” she said.  By this time, her breath had frosted the windows inside so she couldn’t see out.  Now she’d have to scrape ice inside and out, she thought.
She turned the key again, pumping the throttle pedal four more times.
“Click,” said the starter.
Greta got out of the Jimmy and grabbed the battery cables from behind the seat.  She opened the hood and hooked up the cables, then headed back to the cabin for the spare battery.  She glanced at the 1947 Studebaker pickup her dad had given her.
Nah, she thought.  I haven’t started it for three years.
She went back to the cabin, doffed the boots and hat, and poured another mug of coffee.  This time she added a healthy dollop of Borden’s canned evaporated milk to take the edge off the strong coffee.

Once again she stood in the big front window so the truck could she her while she drank her Sourdough latte.  Ten minutes later, again clad in fur and down and rubber, she lugged the heavy battery down the path to the waiting truck. 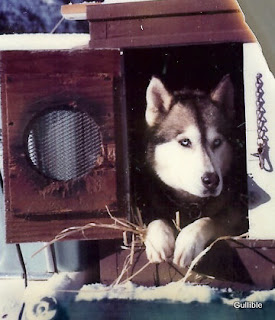 She thought she heard a snicker from the dog lot.  No, said thought.  Dogs can’t laugh.  Must have been a raven or a magpie.
She hooked up the other ends of the jumper cables to the proper anodes and got in the truck.
Choke out?  Check.
Gas?  (pump, pump, pump)  Check.
Key?  Check.

“NNNNNNNNRRRRRRRRRrrrrrrrrrrr…rrr…..rrr…rr..nn….n,” said the truck, but it still wouldn’t start. She pumped the throttle a few more times and turned the key.  “Click,” said the truck.
Greta got out and slammed the truck’s door.   This time she kicked it twice.
She walked over to the old Studebaker, pried open the frozen door with a tire iron, and got in.  Again with the choke, again with the throttle pedal, again with key.
”VVVVROOOOMMMM!!” said the Studebaker.
“Oh, for Pete’s sakes,” said Greta.  She got out and judged how much time it would take to shovel all the snow away from the truck so she could get out of the driveway.
Then she walked over to the wood shed beside the cabin, grabbed a handful of harnesses off the wood peg, and walked to the dog lot. 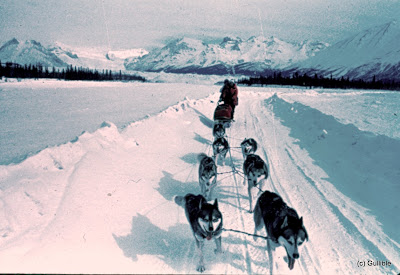 “AHHHHHHHHHHHWOOOOOOOOOOOO,” howled the dogs, which translated from Husky meant “We’re going for a run!” 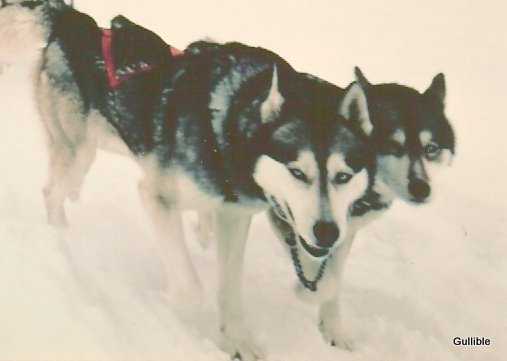 And not a snicker was heard from any one of them.
Posted by Gullible at 3:52 PM