There are heroes and then there are Angels

There are heroes and then there are heroes.  I’m pretty sure there were many when that clumsy, otherwise occupied cruise ship captain ran his behemoth ship onto the rocks near the Italian island of Giglio.  (Doesn’t that word bring “gigolo” to mind?)
And then:
In this corner there’s Dorothea, all of five feet tall and weighing in at 97 lbs.  In the other corner is a moose,  five feet tall at the shoulder and weighing in at half a ton, give or take a hundred pounds.
Dorothea was sitting in her pickup truck at the Willow airstrip, waiting for her husband to return from a walk with their two Golden Retrievers, when she heard the dogs barking furiously.
She saw the moose apparently attacking the older dog, 12 year old Fellar.  Three year old Tut was barking and nipping at the moose’s hind legs. She ran towards the moose, which turned towards her to attack. She backed off and the moose returned to its previous victim.
She went back to the truck and grabbed a grain scoop (they are excellent snow shovels) and walked back to the moose, all the while yelling for her husband George, who was nowhere in sight, to come and help.  Dorothea whacked the moose a few times with the shovel before it left.
That’s when she realized that the old dog hadn’t been the moose’s victim.  It was her 82 year old husband George, who had dived into deep snow in an attempt to escape the moose.
Oh, Dorothea, by the way, is 85.   And it turns out both of them are famous in their part of Alaska.
You can read more about this event at www.adn.com.  George is recuperating in the hospital in Anchorage from a severe gash on his head and other owies and ouches...
Here’s another heroine.  Or is it “hero” in our overly politically correct world?
The snow that blanketed the Seattle area evoked nostalgia in a friend of mine who lives south of that metropolis.  Shirley donned every piece of cold weather gear she could find and went outside into her yard.
Then she laid down in the snow and……..
(wait for it)………
made a snow angel!* 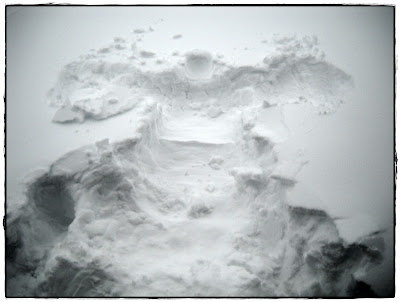 Why is she a hero?
Listen, folks.  She’s older than I am.  How in the heck did she get up and still leave the imprint of an angel in the snow?  If I tried that, the impression would look like a train wreck.  Which, come to think of it, accurately describes the hole in deep snow when I fell as I was snowshoeing to the pump house to repair an electrical problem.
And speaking of snow angels….
I made soup stock yesterday from smoked ham hocks, then put pieces of the hock fat out by the bird feeder.  This morning, in the snow on my front deck, was a snow angel left by a magpie: 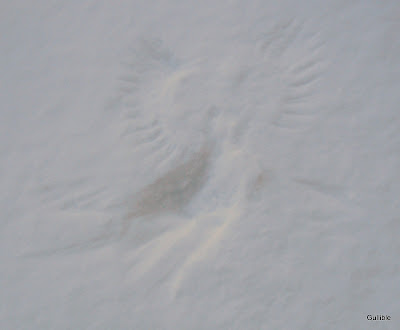