Just another day at Muskeg Manor

My friends in Valdez are going to laugh at this.  I can hear them now.

When I went to bed last night, it was 12 below zero with a brilliantly clear sky.  An almost full moon reflecting off the snow provided enough light that, if I had been so inclined, I could have gone skiing.  At 12 below, I was not so inclined.  Instead, I inclined myself in my little nest in the living room with a nice fire in the wood stove.

When I got up this morning, something felt different.

It was.  Very different.


Twenty above zero--32 degrees warmer--and snowing.  I donned my outdoor gear and waded out to the end of the driveway where I commenced a fruitless search for the orange plastic sack containing the daily newspaper.

Here's a question for you:  How does the newspaper delivery guy expect anyone to find a newspaper if he throws it on the ground during a snowstorm?

I have no answer for that, but I do have a counter response.  If I can't find it, I call it in as "missed delivery."  I've heard it costs the guy $5 for every missed delivery.  For that I feel badly, but with a yellow newspaper tube at the end of my drive, I don't feel "home delivery" should involve a treasure hunt.

Early afternoon I decided to go to the post office and the dump so I donned all that winter gear again (a fleece jacket and low waterproof boots) and headed out in four-wheel drive.

In downtown Moose Pass, the telephone guys were knocking snow off the phone lines before they sagged low enough to be caught by a passing truck.  This has happened a couple times in the last month that I know about. 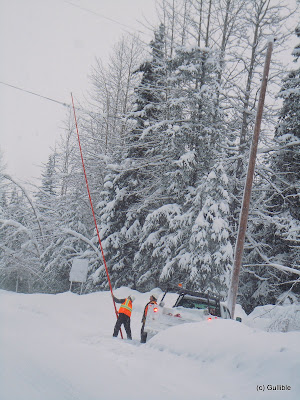 Then I headed five miles south to the dump, which really isn't a dump but a site that holds large roll-off containers in which we place our garbage for transfer to a facility in Soldotna.


Then, mission accomplished, I headed for home and snow-related chores. 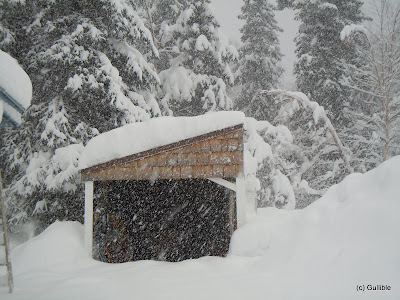 Specfically, finish shoveling the snow off the wood shed roof before it falls down.  I'd previously done the front half.  In the rear, which you can't see from this angle, the snow was four feet deep.  As I worked, I could hear avalanches coming down the mountains, but couldn't see them because it was snowing.

Oh.  Did I fail to mention it was snowing?


Chores all done (actually, I was done before the chores were), I retreated to the house and that aforementioned cozy nest in the living room and a fire in the wood stove.


Now, this is the reason my friends in Valdez (pronounced val-DEEZ) will laugh:  they have already gotten two feet of snow and are expecting lots more from this storm.  Valdez AVERAGES more than 300 inches of snow every year, with the record being 560 inches.

The 14 inches that fell here today would be considered a "dusting" in Valdez.