I took this photo the evening of Jan. 8.  Moonlight reflecting off the snow provided enough light.  Of course, the tripod that had been under my nose for months was now hiding where I'd "put it away" and I couldn't find it.

As a result, there's bit of a blur from a hand-held camera with bare hands at 5 below zero. 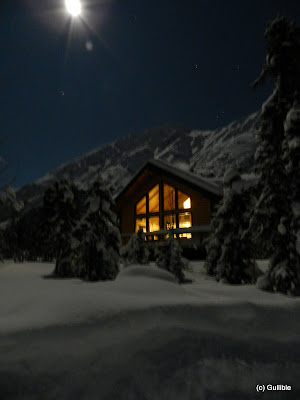 But this post isn't about me taking photos.  It's about some drama taking place right now in other parts of Alaska.

Closest to home is the tremendous snowfalls that continue to occur in Valdez and Cordova, towns that have their toes in the water of Prince William Sound and their backs against the mountains.  It isn't unusual for these two towns to have lots of snow.

What is unusual is for that snow to accumulate as quickly as it has in the last few weeks, one huge wet dump after another.  Valdez is used to coping with snow.  It averages more than 300 inches a year.  That's 25 feetm folks, and much of it stays until spring.  The record year was 560 inches.  That's 47 feet!

Cordova is used to lots of snow, too, but is getting plastered with wet, heavy snow, with some estimates of 10 feet in the last few weeks and 15 feet for this winter.

Last weekend's storm turned to rain and the existing snow soaked it up like a sponge, adding tremendous weight to snow on roofs.  Seventy men and women from the Alaska National Guard landed in Cordova a couple days ago to help the town dig out before more  roofs collapsed.  Now there's a shortage of snow shovels.  With none available from the big stores in Anchorage, town officials are looking to Outside stores for help.

And for photos from Cordova:


There are some phenomenal photos there  Well worth the time to look.

The town of Nome, where the Iditarod sled dog race finishes on the western coast of Alaska, had to look outside the US for help in avoiding a fuel shortage.  Northern Alaska is suffering one of the worst cold spells in memory.  A ferocious storm last fall prevented  the last fuel barge of the season from reaching Nome, and the town was faced with the possibility of having to bring in heating oil and gasoline by air.

The probability of nine dollar a gallon fuel staring them in the face, Nome looked for help from an unusual source:  Russia.  Specifically, the oil tanker Renda.

Weeks of negotiations passed before the ship was given special exemption from the Jones Act, a law that prohibits foreign registered vessels from sailing from one US port to another US port.  This is why US cruise ships have to sail from Vancouver, Canada, to ports in Alaska.


The tanker picked up one million gallons of diesel fuel in South Korea, then sailed to Dutch Harbor in the Aleutian Chain of Alaska and on-loaded 300,000 gallons of gasoline.  A hundred miles out of Dutch Harbor, bound for Nome, the tanker had to return to Dutch Harbor for a mechanical repair.

Now today, the farther-north villages of  Noatak and Kobuk have run out of fuel.  If you go to either of the links I've posted, you can look around the Anchorage Daily News site and find those stories.

Here's a link to more stories and photos about this amazing journey:

Take the time to check out both of these stories.   Just put on a heavy sweater or a jacket before you look at the photos.

As for me, another blizzard is whipping through the valley and I suspect that my neighbor's yard is free of snow because it's all over here in my driveway.  I can't tell if we're getting new snow or not with the wind whipping around the 18 inches of powder that fell in the last two snowstorms.  That's on top of the three feet of heavier snow that was already on the ground.

The last time I looked, there was a three-foot drift in front of my door.  I didn't even bother looking for today's newspaper.  I'm not leaving the house today.  Nowhere to go, anyway.  The Seward highway to Anchorage is closed because of zero visibility and avalanches.

Besides, I doubt I can get out of my own driveway.  If the wind settles down, I might go out and take pictures.  Don't count on it, though.
Posted by Gullible at 3:33 PM