Mike looked at the bedside clock and wondered what had awakened him at 3 AM.  Usually he slept through the night, so this was odd.  He lay in bed, listening for any clue, anything out of the ordinary noises in his home.
All seemed well.  No sirens, no smoke alarm, nothing.  He rolled over, facing the window, to go back to sleep.
Staring at him through thin, breakable glass was a huge polar bear.
Such is life in Churchill, Manitoba, on the western shore of Hudson Bay, where some 900 polar bears are known to live.  Changing weather has brought change for the great white bears.  The ice goes out sooner in summer and forms later in winter, leaving the bears increasingly shore-bound and without access to the ringed seals that are their primary diet. 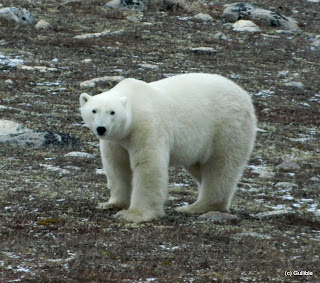 It also gives them more opportunities to wander into town in search of food, which is not a good thing for the people who live in Churchill as the polar bear is the largest land-dwelling carnivore known to stalk humans.  Adult male bears can weigh three-quarters of a ton.
Mike’s story didn’t end with the bear strolling away from his bedroom window.  As does everyone in Churchill who encounters a bear, Mike immediately phoned the 24-hour hot line and reported a bear in town.  After convincing the responding officer that there really was a bear outside his house, Mike eventually went back to sleep, confident the patrol would chase the bear back onto to the tundra.
The next morning Mike stopped by the local café.
“Seen any more pink bears?” someone asked.  At first Mike thought they were teasing him about seeing “pink bears,” a Churchill equivalent to pink elephants.  Then he heard the rest of the story.
When the peeping bear left Mike’s, it wandered across town near the grain terminal.  Along the way, it wrenched a fire extinguisher off its wall mount, puncturing the hose in the process.  When conservation officers tracked the bear’s path, they came across the result—the wall where the extinguisher had been mounted was covered in the pink contents of the extinguisher, perfectly outlining the polar bear.
And pink tracks led revealed the bear’s route out of town. 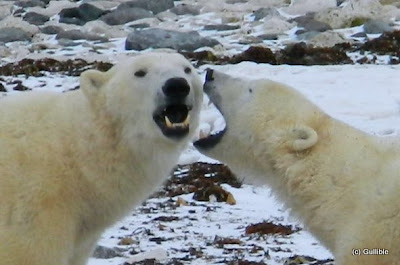 “Mike” is Mike Goodyear, the executive director of the Churchill Northern Studies Centre located a few miles out of Churchill proper.  He is also a fine ambassador on behalf of the bears.  When asked if he isn’t concerned about running into bears when he jogs or bikes out of town, which is patrolled constantly for bears, Mike responds, “I’m more concerned about stroke and heart attack being the number one cause of death in men over 35.”
And so it is with people who live in bear country.  They are always aware of the possibility of sudden bear encounters.  They go about their lives as normally as anyone else, but always aware, always adapted to living with bears. 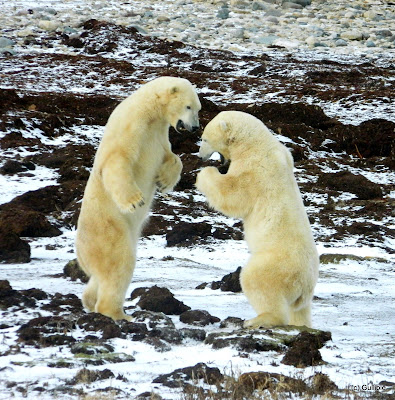 The last fatal bear encounter in Churchill was more than 25 years ago when a man walking home one night rummaged through the ruins of a hotel that had recently burned.  He found still edible meat in the restaurant’s freezers, and loaded up his pockets. 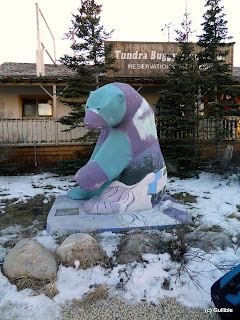 Shortly afterwards, his cries were heard and residents rushed out and killed the polar bear that was savaging the victim.  It was, unfortunately, not in time to save the man who had filled his pockets with meat.  The bear’s tracks showed it had stalked the man through town and then attacked. 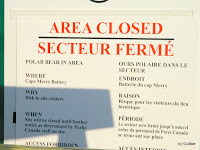 For now, the people of Churchill have a tenuous working relationship with the bears.  They are, after all, what brings the influx of tourism to that part of the country, and tourism means jobs.  During the summer, the mouth of the Churchill River can be filled with thousands of beluga whales gathering there to calve, and the tundra is covered with wildflowers.
While spotting polar bears in the summer is “iffy” because they tend to roam far inland, it isn’t impossible to encounter the occasional bear.  It’s during late October and early to mid-November that the animals gather along the shore of Hudson Bay near Churchill, the place where ice usually forms first.

At these times, the tundra in the Wapusk National Park can seem like a vast wildlife theme park.  Snowy owls, white Arctic fox, caribou, game birds and birds of prey also live on the sparsely-treed land.  These creatures are perfectly suited for the harsh conditions of subsisting in the north, as are the bears.

Huge feet act like snowshoes, spreading the bear’s weight and enabling it to walk on barely frozen ice, the same ice that Mike attempted to walk on and found himself in cold water up to his knees.  Small ears prevent freezing, and the bears’ profiles are perfect for reaching into a seal’s breathing hole in thick ice and grabbing it. 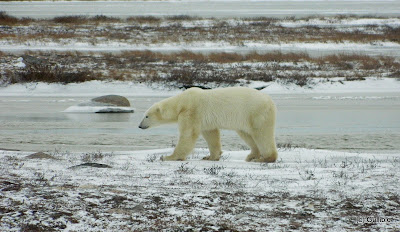 Powerful jaws kill the seal immediately and enable it to pull the fat, rotund seal through the small breathing hole.  So well insulating is the bear’s thick fur that infra-red monitoring of a bear picks up only the heat transferred to the surface where the bear stepped.  It cannot detect heat escaping from the rest of the bear.

This is fine when the bear is on the Arctic ice, yet with warming conditions forcing the bears onto land for longer periods, further stresses the animals.
But it takes only one look into the eyes of a hungry white bear to dispel any notions of Disneyland.  Cute, white, and fuzzy aside, these are hungry predators, with tourists and residents alike below them on the food chain. 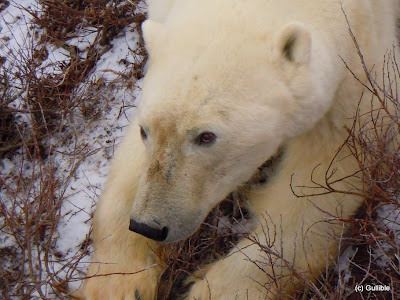