Abe Lincoln and me and the shamrock....

Works for me, those words quoted above. When I'm out picking up roadside litter, I really feel good, no matter how disgusting the refuse or how often I've picked up along the same stretch of highway. For those of us who enjoy a litter-free countryside, it's worth the effort.

Works in other ways, too. But, what about shamrocks? Do they count? Thirty years ago when my folks were leaving on a two-year motorhome trip to celebrate their retirement, I became the caretaker of a nice green shamrock plant. It grew constantly, and frequently festooned itself with delicate white flowers. It also needed a haircut regularly as various stems with their four triangular-shaped leaves died off and new ones took their places.

The shamrock has lived in my walk-in closet, on the window ledge where it doesn't receive much direct sunlight. It seems to like it there, much like the African Violet adores the kitchen counter spot right by the stove-top range. I think the violet likes my cooking because it threatens to grow into a bush large enough to use for a hedge.

But, a couple months ago I noticed the shamrock wasn't happy at all. A multitude of shriveled, dry dead stems hung forlornly over the edge of the pot. Only one stem seemed still alive, but the leaves were a chartreuse color rather than the deep green they were supposed to be. I should re-pot that, I said to myself, and then promptly forgot about it. That's pretty much in keeping with my philosphy about indoor plant care: long periods of dehydration followed by inundation.

Finally I got around to re-potting the shamrock, but only because the Christmas cactus in the entryway--and its similar yellowish coloration--was far more visible as a reminder. I had to use a long knife to cut the shamrock's soil loose from the plastic pot it which it has lived for more than thirty years. I broke away as much of the old soil as I could, and trimmed off all the dead stems. Then I placed the shamrock in its new home--a larger pot filled with Miracle-Gro potting soil.

Three weeks later, this is what I have: 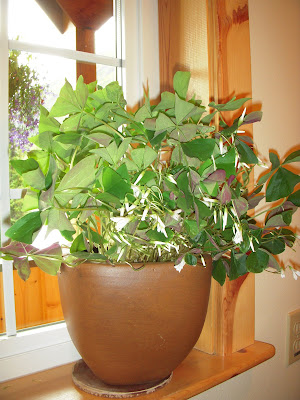