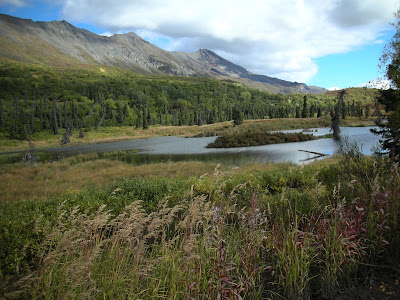 I’ve received a number of e-mails from friends asking me what I think of John McCain’s selection of Alaska’s governor as his running mate. I’ve been trying to think of an answer all weekend, and the fact is, I’m as stunned as everyone else.

My first reaction to the news—delivered by telephone from a neighbor—was disbelief. Sure, we’d been hearing rumors for months that she was being considered, but I certainly didn’t put much credence in the rumors. After all, this is Alaska. This is the place where most Outside businesses don’t know we’re a state, or tell us they don’t ship “overseas” or to “foreign countries.” And, my use of the old territorial Alaskan term “Outside” should tell you everything you need to know about how most Alaskans view the rest of the states, which is what the term refers to. We're different, we're mavericks, we're fiercely independent.

Back to Sarah. My second reaction was, “But……what about us?” She’s doing a good job, and I don’t want to lose her as governor. I’ve been somewhat reassured with her announcement that she will not resign her office here as she campaigns with McCain. So, if they are defeated in November, she’ll come back to Alaska as our governor.

You’ll hear about her integrity and reform platform, how she went up against the GOP state chairman when she questioned his ethics. You’ll hear how she tackled our beloved senior U.S. Senator Ted Stevens, who recently won the primary as the GOP candidate for that office again, even though he’s under indictment. She took on Big Oil, insisting the legislature levy a higher tax rate, and called their bluff by organizing a deal to have a natural gas line built by a Canadian company. She most certainly is NOT in the pocket of Big Oil!

You’ll also be hearing a lot about “Troopergate,” in which Sarah is under investigation on allegations, which she denies, that she used her power of office to attempt to have Alaska State Trooper Wooten fired, then subsequently fired her commissioner of Public Safety because he refused to do so. About that, I have this to say: the trooper admitted he Tasered his eleven year old step-son after the boy pestered him to do so because he wanted to know what it felt like.

Other allegations against the trooper, who two years ago was going through a contentious divorce with Sarah’s sister, are that he drove his patrol vehicle while drinking and drunk, and that he threatened to kill his father-in-law (Sarah’s father) if the elder man hired an attorney for Wooten’s estranged wife. Wooten also admitted taking a moose illegally—he shot the animal using a permit issued to his wife. Wooten was suspended from the force for a brief time as a result of an internal police investigation into these matters.

In the meantime, I hope she and her family aren’t shredded by the national exposure. As we all know, some of the best people don’t run for public office because of the intense media scrutiny and rumors that can eviscerate them. Today’s announcement of the pregnancy of Sarah’s eldest daughter is an example.

As for her lack of experience in foreign affairs? I say, give her a chance. I’m sure she is being tutored relentlessly. I can’t wait for the Palin-Biden debate.

I am fully aware that this candidacy will bring national attention to Alaska. As one who has lived here for more than sixty years, I will admit that I have a great deal of “I’ve got mine, now lock the door” in me. I’m not at all sure the attention is a good thing for MY vision of Alaska. I’ve seen a number of changes since 1948, the year my parents brought me here, and not all of them are good. But then, I use “good” in a subjective fashion.

For my final opinion, I’ll say this, “I don’t want to lose her as our governor.” It’s been a long time since I’ve felt that way about any governor, which should tell you a lot about Sarah Palin.
Posted by Gullible at 1:33 PM