The brandy splattered the ashes a bit when it hit, but the liquid was absorbed quickly by the dry flakes. How utterly appropriate, I thought, as I gazed through tears at the dark wet stain on the white dust. A long-held tradition had just been followed, this time with a component that few of us hope for, but most of us want.

Tradition. Perhaps, for emphasis, that word should be written “tra-di-TION” with the accent on the last syllable, the way Topal sang it in “Fiddler on the Roof,” as he espoused the customs that bound his people together while he feared the loss of more traditions to modernization and a changing world.

Even in a moose hunting camp there are traditions. I could remember only one before I left in late August to visit the camp on Boulder Creek where my husband used to hunt with his friends. That one decreed: thou shalt not sit on another’s log stump. Each regular had his customary place around the campfire, and it was verboten to sit there if that person was in camp. Today the stumps have given way to those ubiquitous folding chairs and the stumps are now side tables.

With that in mind, I went shopping for a folding chair to take to Boulder Creek. It had to have a recessed pocket in the arm rest to hold my beverage of choice, and it had to be distinctive enough that it would be recognized as mine. I found it at Sportsman’s Warehouse.

Not only did it have the requisite beverage holder, but its distinctiveness assured me of always having a seat at the fire, even when the number in camp grew to 15, plus visitors from other camps. I would never, ever, have to kick some well-armed hunter out of my chair. It was, you see, bright pink. And, to make it even more special, an attached tag promised that a dollar of its $9.99 purchase price would be sent to the breast cancer research foundation.

Now, bright pink is not the color one should take on a camping trip, but I figured the chair with all its advantages would serve me well, so I wrapped it in two heavy duty garbage bags and sealed the package with duct tape for the muddy trip into Boulder Creek.

At the last minute I recalled that everybody had his own cup so I packed my thick, heavy black 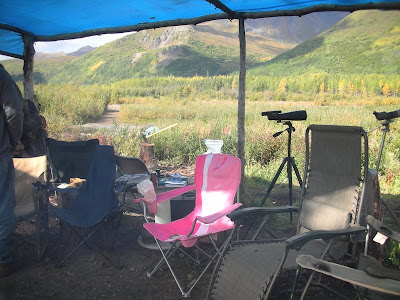 My chair in all its pink exclusivity.

Wrangell-St. Elias National Park souvenir cup. After I unpacked it in camp, I headed to the kitchen to hang it with the others, and asked if we all had our own nail on which to suspend it. No, those were first come, first hung.

I was right. My chair was always vacant and waiting for me, even as various hunters in camouflage stood to drink their coffee and swap hunting tales. After a couple days, Matt, who sat across the fire from me, remarked that the pink remembrance ribbon on the backrest of the chair looked like a stylized “J”, the initial of my first name. I laughed and agreed, and said that the white band that flowed somewhat diagonally from top to seat also looked like the internationally recognized “no-no” slash.

Now that Matt is directing the camp, it has become customary to have rib eye steaks the night before moose season opens. He cooked up a large pot of his special beans and Suzanne assembled a big bowl of green salad to accompany the meat. Steaks were grilled over charcoal for all of us, as well as the many visitors from nearby camps who stopped by for this traditional pre-hunt meal.

The following evening, in another tradition, Matt’s son Adam fired up an old restaurant grill and covered it several times with pork chops to feed our group of 15. We ate corn on the cob and put a massive dent in the coleslaw made by Dee.

On the way into camp that first day, I was reintroduced to one of the abiding traditions of this group. At a certain spot the trail climbs to a knoll that affords a spectacular view of the surrounding mountains and valleys. On top of this knoll is a large rock, big enough for a couple or three four wheelers to park. It’s called Blackberry Knob.

The tradition at this knob, started by Tom Smith, the founding father of the Boulder Creek tent camp, is that one must stop for a rest break and take a sip of blackberry brandy.

It isn’t for the brandy that this tradition has been carried on for more than 20 years. It’s for the enduring comradeship, the recognition of how like interests can bring together people from varied walks of life, of how one man with a heart that encompassed all of Alaska could influence so many others, and could be a friend so loved and cherished that his habit became an enduring tradition.

When Tom died several years ago, his friends from camp spread his ashes all over the Boulder Creek valley, and some at Blackberry Knob. That is why, on my journey out from camp, we stopped at Blackberry Knob not only for the mandatory sip of brandy, but also to add some of my husband’s ashes to the site.

We all said “hello” to Tom and “goodbye” to Ken as I sprinkled a small portion of cremains alongside the trail at the very top of the knob. A few particles wafted onto Matt’s four wheeler, but I didn’t mention it to him, somehow secretly pleased that a part of Ken would once again be astride one of his favorite machines. A few words were spoken and someone (I couldn’t see through the tears to identify him) poured a shot of brandy onto the ashes, and I was amused at how quickly the dry ashes absorbed the sweet brandy.

I stepped off the knob to take a picture of our small group, picked a bit of litter off the tundra while I was there, and gathered a handful of sweet blueberries. 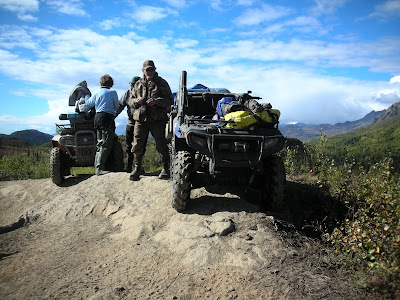 Once back atop the knob, I added the blueberries to the white ashes and dark brandy, and thought of Tom and Ken together again, enjoying the libation and catching up on dozens of jokes and stories.

I hope they know that their friends, and their friends’ children, and their children’s friends will be carrying on this tradition. Few of us, as I hinted at the beginning, hope for death, but all of us want to be remembered by our friends when that time comes. A little splash of blackberry brandy wouldn’t hurt either.

Traditions. They bind us together while they set us apart.