Life in Black and White 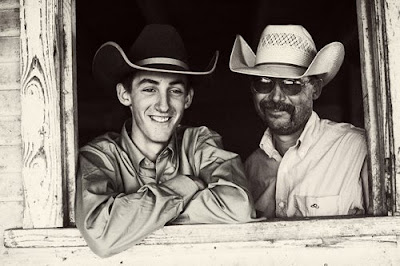 Photograph by Ree of The Pioneer Woman,
http://thepioneerwoman.com/

The photograph is in black and white. Only the imagination colors the barn boards in weathered gray and silver and pewter. The symbolism in the picture is unmistakable.

Almost eighteen, almost a man, lean and hungry as a teenager can be. He is framed in the window of the old barn, arms crossed with one elbow on the sill, the other extending out and over the edge. Good humor and curiosity glow in his dark eyes.

He is looking into the future with the innocence of the young. That elbow hooked over the sill shows his yearning to take wing in that direction. The other elbow, however, keeps him firmly rooted to home. He leans against the window frame, his shoulder holding him back, still needing the protective cocoon of family. His long, square chin is too big for his face now, indicating the boy has a lot of growing to do in the years ahead of him. That chin will never be tucked in fear. Instead it is characteristic of fortitude and stalwartness.

He has chosen a black Stetson with a light-colored band and edge piping. His ears seem to be all that keep the Stetson from descending over his face. He has been raised in the tradition of hard work on a family ranch, and his choice of the classic Stetson shows his grounding in that tradition. Perhaps in a few years, when he has grown into being his own man, he’ll make a different choice, a statement of his own individuality.

His father stands beside him, somewhat behind. Unseen, but certainly inferred, is the older man’s hand on his son’s back. Gently easing the boy into adulthood, while at the same time, holding onto his boy. The father’s features are heavier with the truths of a harsh world. Sunglasses shield his eyes below his white Stetson—a working man’s hat with weaving for cooling ventilation.

His smile is a bit crooked, a bit unsure, partially hidden by a drooping mustachio. Is he a shy cowboy in front of a revealing lens? Or, unlike his young son, a man who is worldly-wise and knows he must hold back a bit, cover up some of his emotions. Is that the reason for the dark sunglasses? Does a tear lurk there? Perhaps a tear of disquiet for the impending flight of his son, or a tear of pride in the lanky youth who’s ready to spread his wings?
Posted by Gullible at 3:10 PM